This weekend, I went camping with friends, while Jillian had a writers’ retreat. This camping trip would be my first in my new hammock, my second time with our dog, and my first with my new stove. And, while it was warm during the day (70s), it was chilly at night (30s), meaning I wasn’t sure either the dog or me would be able to keep warm. So no matter where we went, it had to be close enough to the car that if needed, I could throw the dog in the car and head for warmth.

Our first pick was Oxbow Regional Park, as it was relatively close to Portland and had open spots for car camping. But we soon discovered it’s also a nature preserve, meaning no dogs allowed. Finding a new spot was tricky. Most Oregon parks don’t open until mid-May.

We ended up at Memaloose State Park, in between Hood River and The Dalles, right on the river.

Since we had no reservation, we were worried headed out there, as it was a beautiful weekend and we already knew there weren’t any other open parks. But it wasn’t even half full, and the view of the river and the gorge was awesome. It seemed perfect. 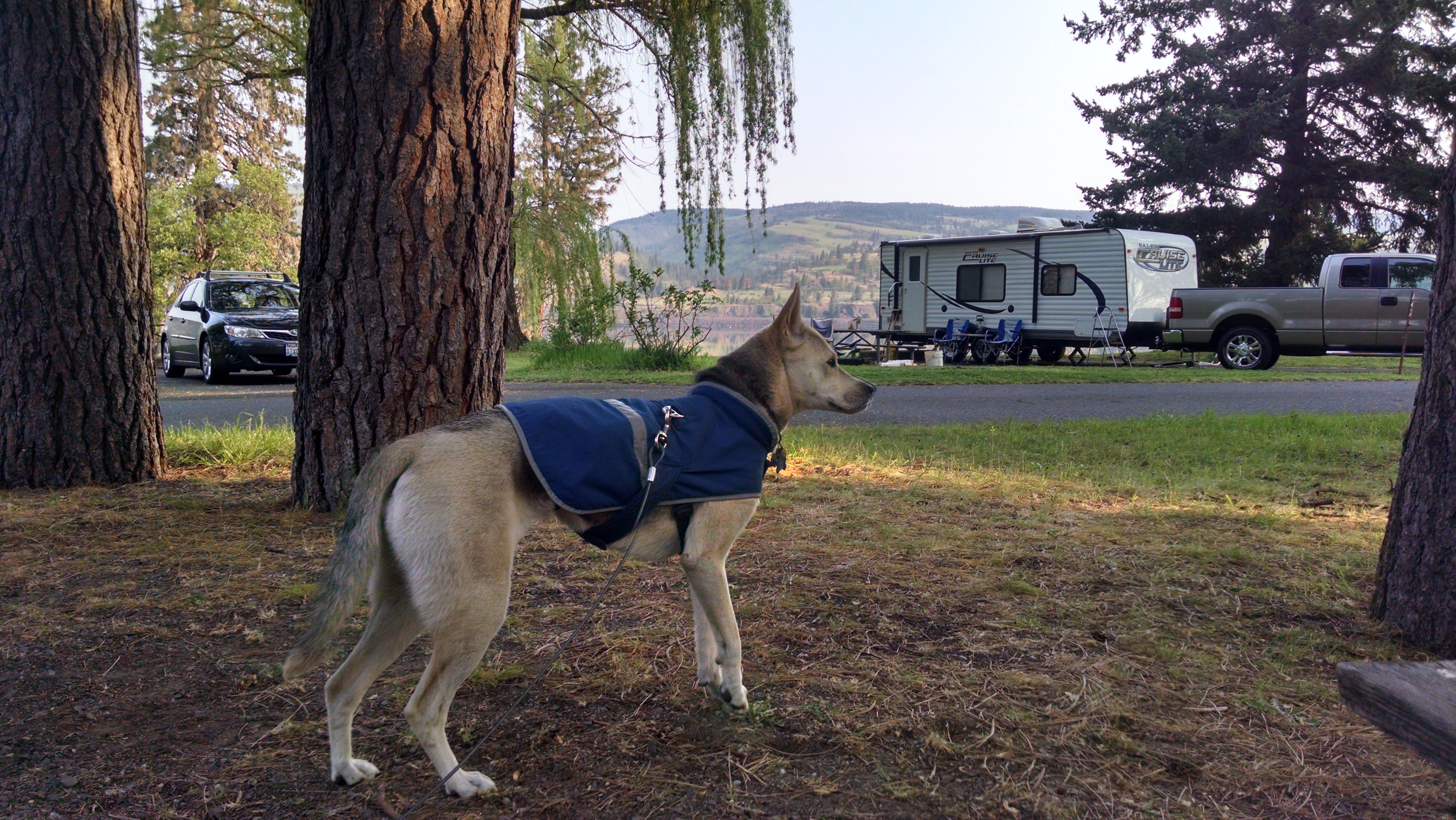 We should have known better. Though it seemed like a perfect spot when we arrived, the park sits between I-80 and a set of train tracks — with another set right across the river. Every half hour, all night, another hundred cars rolled through. And the trucks on the highway were non-stop.

It was a mistake to hang my Hennessey Hammock Expedition Asym Zip between two pine trees, as I ended up getting sap on the straps. 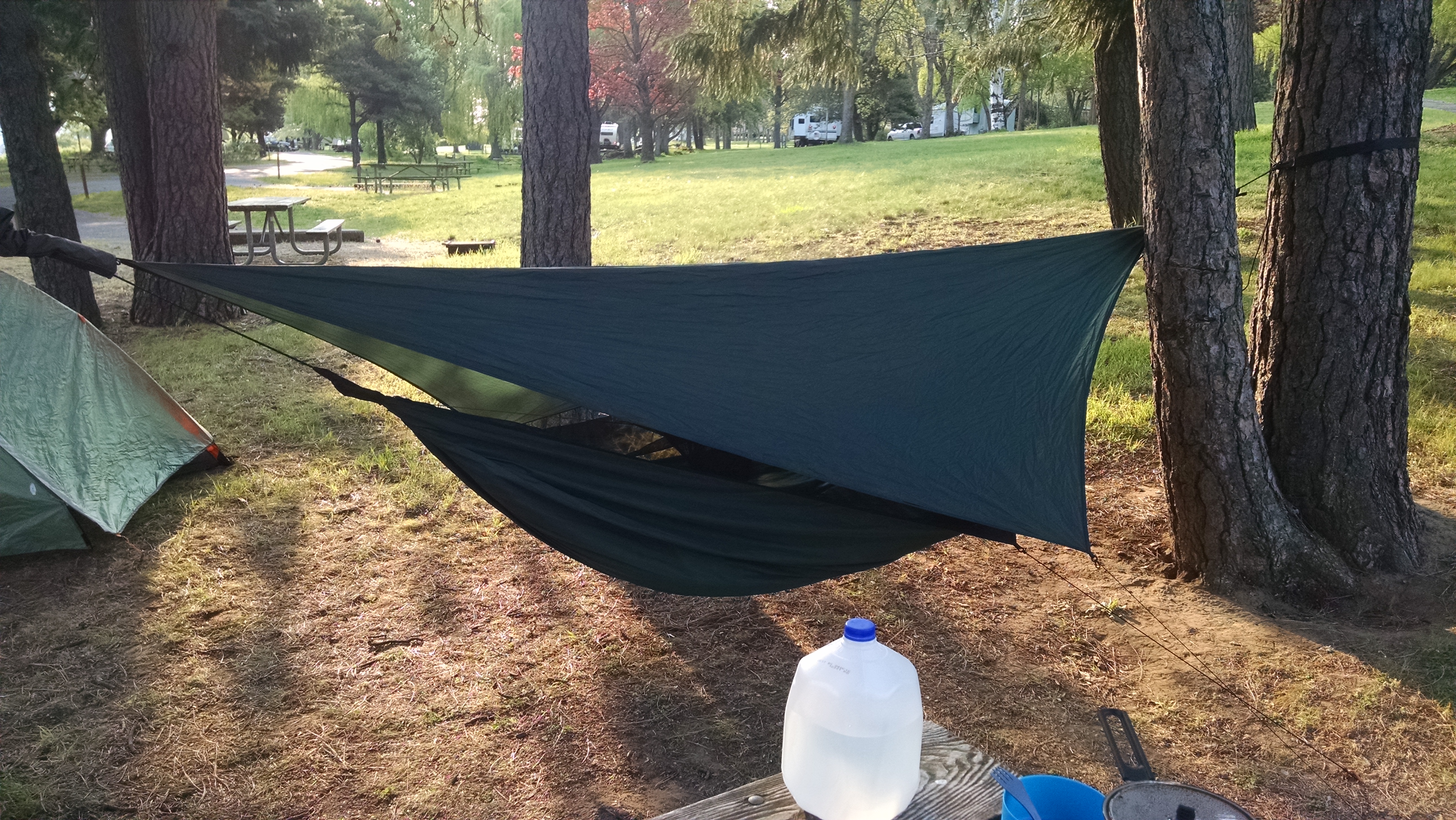 Those went straight into the wash as soon as we got home. If it’d been a warmer night, it would have been great to detach the fly, but I wanted to trap whatever warmth I could. I strongly recommend the snakeskins, which made set-up and tear-down take no time at all.

I used a little thermal blanket to try and make someplace for Karou to sleep on under the hammock, but she wasn’t interested. Worried she wouldn’t be warm enough, I dragged her dog bed out of the car and put that under there instead. She responded by digging a hole in the dirt and curling up in it fifteen feet away. I’d say she was just afraid of the hammock, but we have a pair of (non-camping) hammocks in the backyard, and she doesn’t hesitate to jump on them while I’m on there to get me to wake up and let her back inside.

So I went to bed with my dog sitting in a hole in the dirt, awake and staring at me. But I was up less than an hour later - she was growling at every train that came through and working up to a bark. I threw her and her bed into the back of the car.

Even though I was on my Thermarest NeoAir, I ended up unable to keep warm the whole night. For my next trip with temperatures like this, I’m going to see about getting an underquilt (like this one).

By six I was up and walking Karou to get warm. Even though she was wrapped in her jacket, she shivered most of our walk. That left me worried about camping with her in the future, especially two or three thousand feet higher. I would have brought her into the hammock with me, but I was quite certain she’d choose to freeze to death before cuddling with a human. As crazy as it sounds, I’m wondering if I could train her to sleep in a dog sleeping bag.

Since we’d arrived after dinner the night before, I ended up not making dinner on my Whisperlite International, but I did make some coffee to drink while watching the sun come up. And that moment, sitting there with my dog, watching the sun rise in the gorge, made the whole trip worthwhile.

Afterward, on our way back to Eugene, we stopped at the outlets and Karou and I hung out in the parking lot while Jillian grabbed a few things. Thank you to the person that designed these leashes with the snap in them. I use that constantly. And thank you to the security guard who directed me to the only tree big enough to provide any shade in the entire parking lot, and who made my day by mistaking my dog for a coyote. 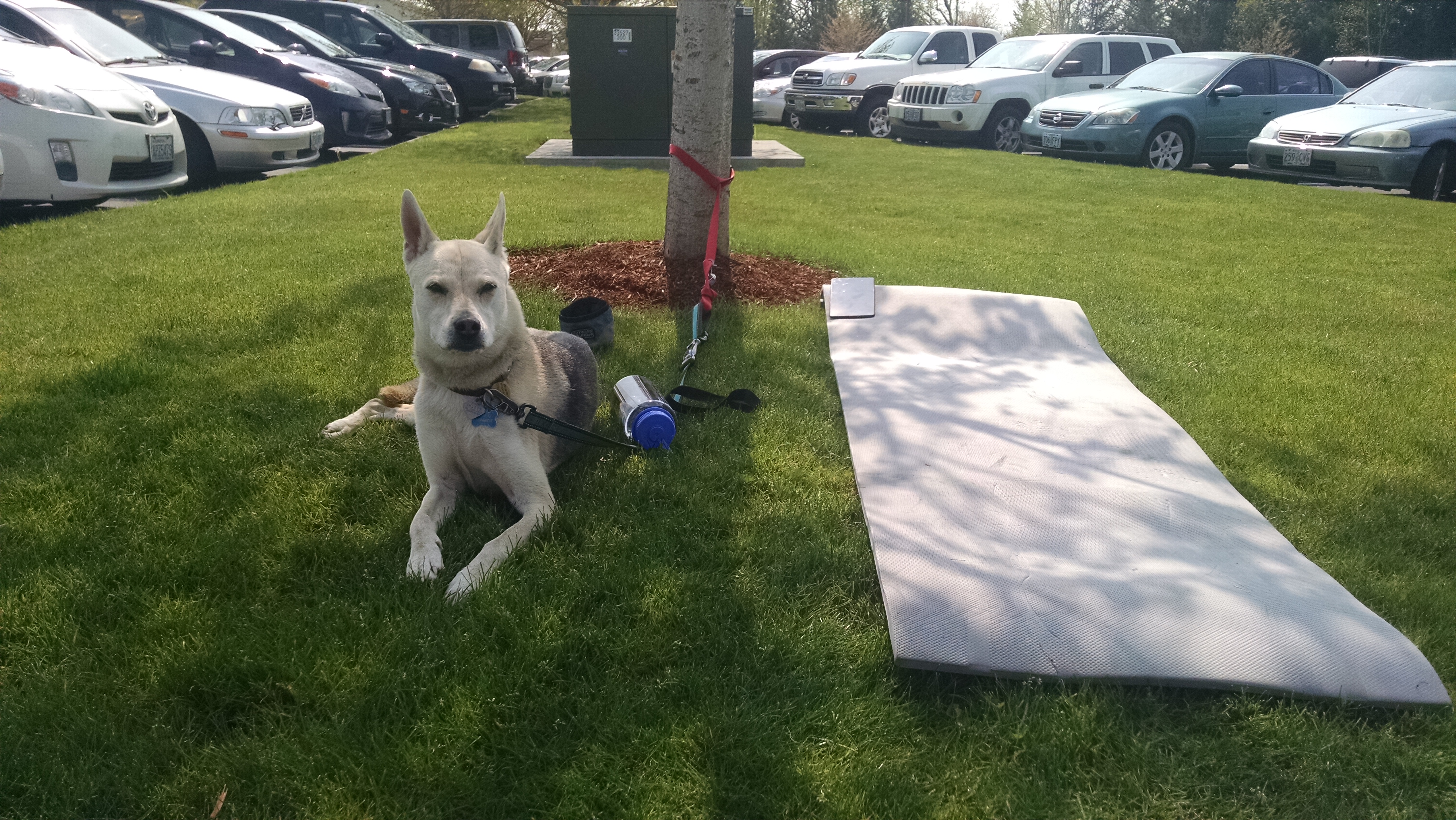 Overall, glad I took the trip. But next time, I’ll pick somewhere else.