This year I was fortunate enough to attend Dream 2016, the annual conference for the Achieving the Dream Network (We’re a member).

At first, I wasn’t fully sure how I fit. After all, I’m ostensibly an IT person, destined to sit in a windowless office staring at monitors all day. With session titles like “Smart Start Finish Strong: A Model for Implementing Guided Pathways”, what was I going to attend all day?

I actually had the opposite problem: more sessions I wanted to attend than I had time for. It’s increasingly impossible to divorce IT needs and student services needs, and even sessions that weren’t relevant to me today probably will be soon. Here are my takeaways:

One of the sessions I went to talked about Continuous Improvement. Their process looked like this:

I kept thinking about iterative design. The basic principle is that we don’t know the best design or process, but we can make an educated guess. From there we can collect some data to inform how we should improve our guess. A similar principle is rapid prototyping:

@mccc - rapid prototyping is now our norm, if something doesn't work in our testing, let's throw it out and start over #ATD_DREAM

Try lots of things. Improve what works. Throw the rest out.

Sometimes we fail at continuous improvement because of a lack of resources, and we’re forced to move onto the next thing and not reflect. But sometimes it’s because we try to design the whole thing perfectly all at once. We hold focus groups, create a plan, then dog and pony show all over campus. Along the way, countless hands touch the plan somehow, each changing it a little.

Reminds me of this tweet (I wish I remembered whose presentation!) from HigherEdWeb two years ago:

STOP ASKING EVERYONE FOR SIGN OFF. Stop it. Not everyone gets a say. Seriously. #heweb14

Easy access to data is more important than anyone realizes

We’ve been talking about creating a data dashboard, along the lines of the one created by LBCC. So far, we’re not very far along. But even though there’s only one widget up there, we’ve had a lot of good conversations.

So many conversations at ATD Dream were about data.

We have a long way to go in order to properly leverage our data. Not only do we need to put that data into the hands of as many people as possible, to help their continuous improvement processes, but we need to make that data as intuitive as possible. Student data is as complex as our students. We need sane default choices, clear instructions, and visualizations easy to interact with and read.

Also, there’s very clearly a misunderstanding of what “big data” means in the HigherEd Community.

Data Summits are not just about data

We’ve been talking about how to make our upcoming data summit relevant to the whole campus, and present data important to each person in that room.

But I’m not sure that matters anymore. Half the point of getting people to talk about data is to get them familiar with process and vocabulary. We have a lot of funny terms in Higher Ed that seem intuitive but actually have very specific meanings. Persistence means that a student was still present (or graduated/transferred) the next non-summer term. Retention means that student was present (or graduated/transferred) either Fall to Fall or Fall to Spring. But we probably mean Fall to Fall.

Starting a data culture starts with everyone speaking the same language.

We’re doing a series of road shows (presentations in different departments) promoting our upcoming data summit. At these, not only do we need to show what we’re doing with data driven reform around campus, we need to make sure people understand that we have a vision for student success. And implementing that vision isn’t something that can wait. Students are dropping out now. Students are failing now. We need to improve now.

We should audit our offerings

After the conference, I filled out our admissions application and was appalled with some of the things I saw. One of them was our big, huge list of degrees. I’m convinced we don’t even offer some of them.

Some of the other schools at ATD Dream audited their degrees, and discovered that, for instance, they offered five business degrees which each differed by only one or two courses. Two books I’ve read in the last year have helped to convince me that’s a terrible idea: The Paradox of Choice and Redesigning America’s Community Colleges. The college from the session simplified to just one business degree. We should do the same process with our credential offerings.

As a bonus, an audit would help us identify how far away we are from stackable certificates and degrees.

We need to think more about carrots

There’s a lot of things you’re required to do as a student: pay your bills, finish orientation, do an advising session, take your placement tests. The only mechanism we have to force an action is the hold. A hold doesn’t let you register for classes until it’s released. In other words, the only way we can force you to do something is to keep you from doing the one thing we really want you to do.

One school offered a $500 first term scholarship to students who completed their steps to enroll on time. Another offered advance registration for anyone with a career, financial, and academic plan on file. We should find some carrots.

And on the topic of scholarships, sometimes the whole point of a scholarship is to be able to say you got a scholarship. $500 barely buys textbooks for a term. When I graduated high school, I got a very small scholarship. It wouldn’t even buy my groceries for the week now. But I got a scholarship. Someone believed in me going to college so much that they gave me money just to go. That’s a powerful message.

Before going to ATD Dream, I didn’t even really know this was a thing. But it’s genius. So many things can go wrong on placement testing day, and so few students understand that while they can’t fail, these are high stakes tests.

It’s questionable if placement testing even really does what it’s supposed to. Some schools allowed SAT scores. Others high school grades. Others accepted multiple tests. Some allowed all the above. There’s both technical and procedural issues preventing us from looking at multiple measure placement. We need to figure those issues out. My personal preference would be to allow self placement, but provide a suggested placement via an automated solution.

Customer Service matters. Maybe more than anything else

I went to one session by a college (who shall remain nameless) presenting their redesigned admission and advising process. Their website was underwhelming. Their admissions application was barely usable.

And none of it mattered

Their enrollment is up several percent. And what do students say? That they stay enrolled, finishing classes, because they know the employees all care. Customer service on a totally different level. We should aspire to be half as good.

One institution asked each of their employees to list the five people that they talked to most in their jobs. They found tremendous gaps. People tasked with advising students on curriculum didn’t talk to anyone that influenced what was actually in the curriculum. Silos.

We should create a similar map. Not only would we visually see our silos, but we’d see who the influential people are. Some would be expected, like the heads of departments or the college president. But there’d be other people who just always seem to be in the know. The hidden people that make the college run without a title. They’d be the people to get behind reform initiatives.

It rained the whole time. I was in Atlanta, but it felt like Eugene. But it was a beautiful hotel! Dinner in the restaurant on top is worth it, but the restaurant in the lobby is pretty delicious as well. 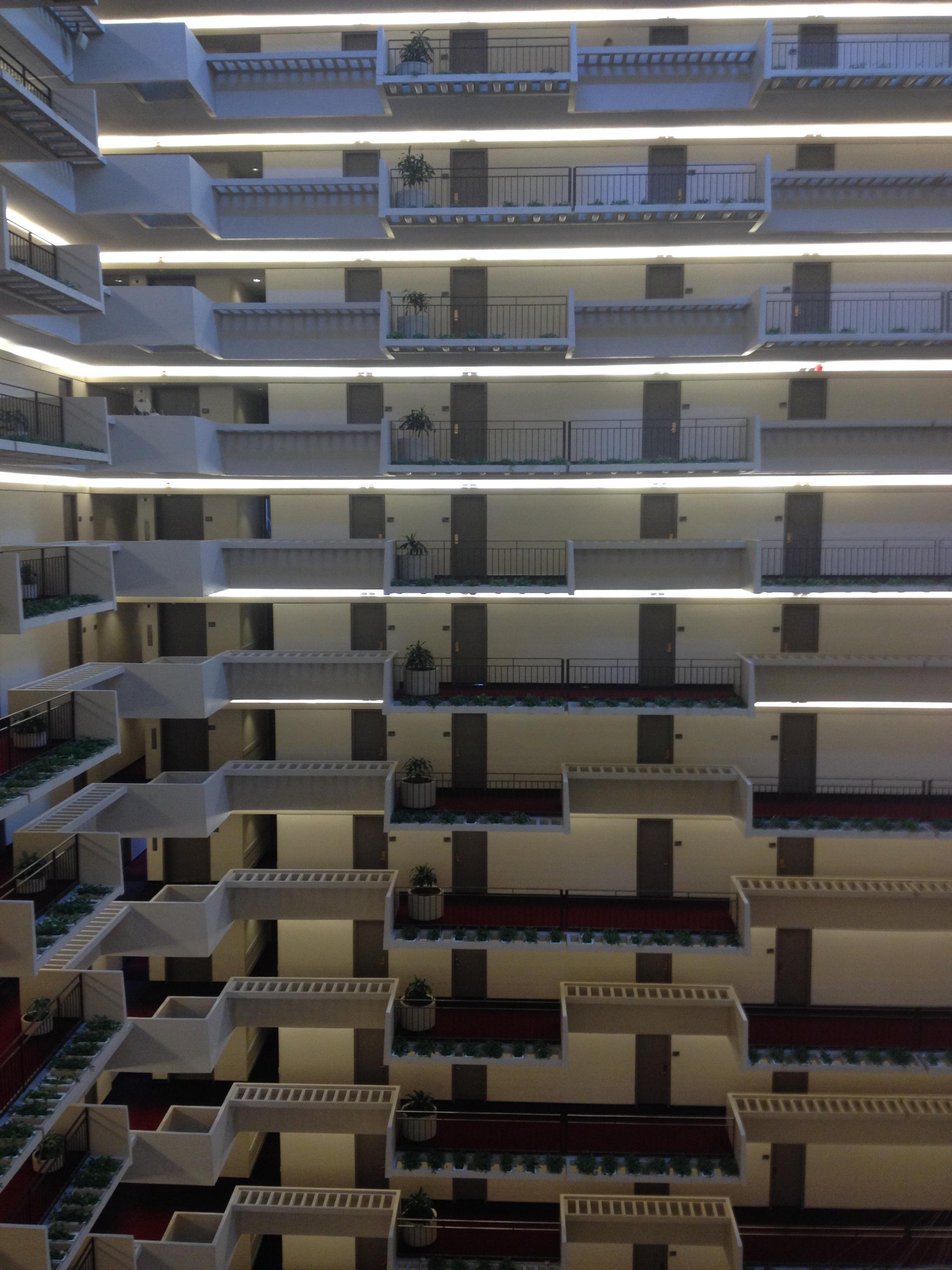 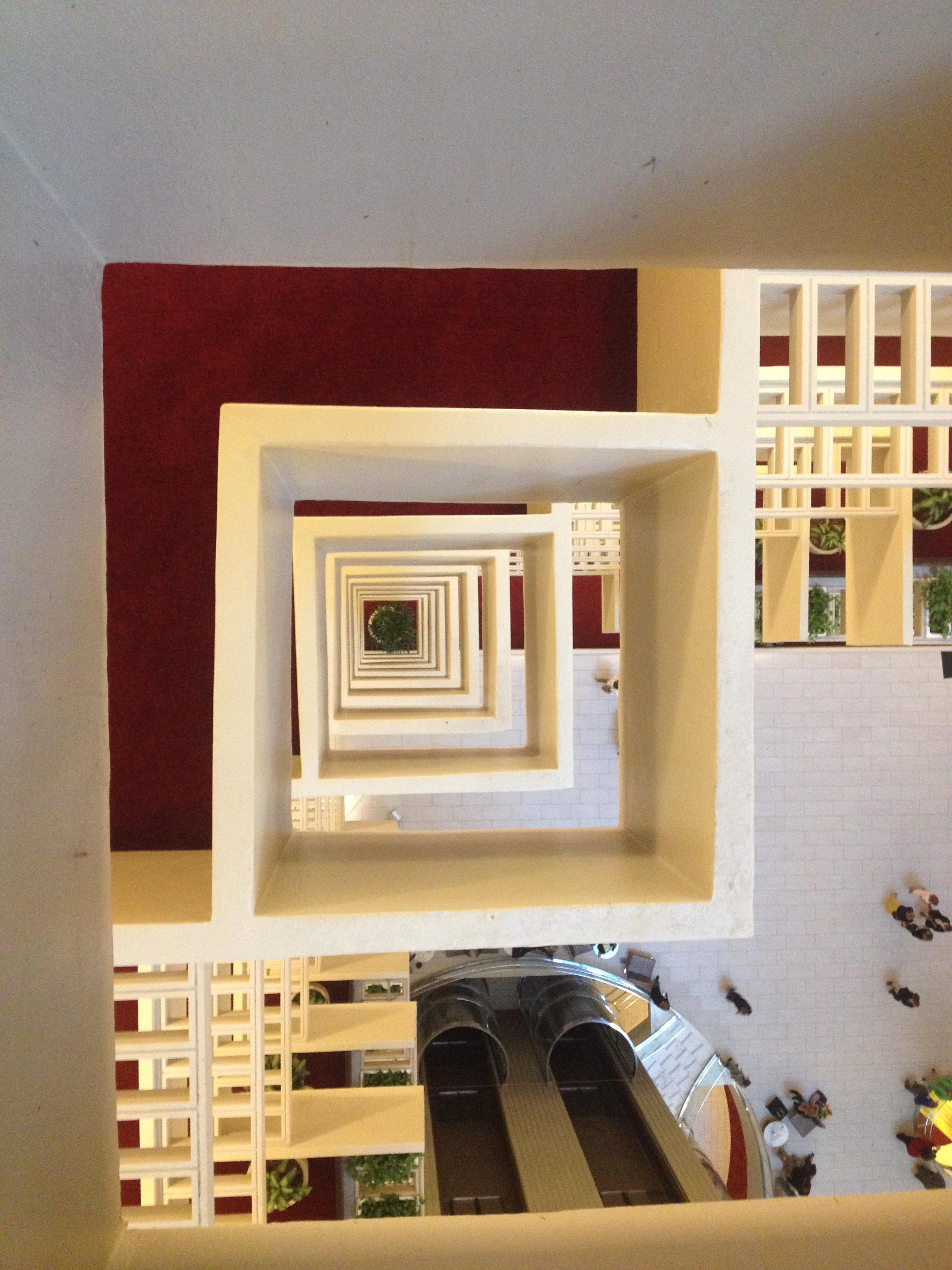 Also, the foam puzzle piece cards we got during the opening plenary stack nicely. 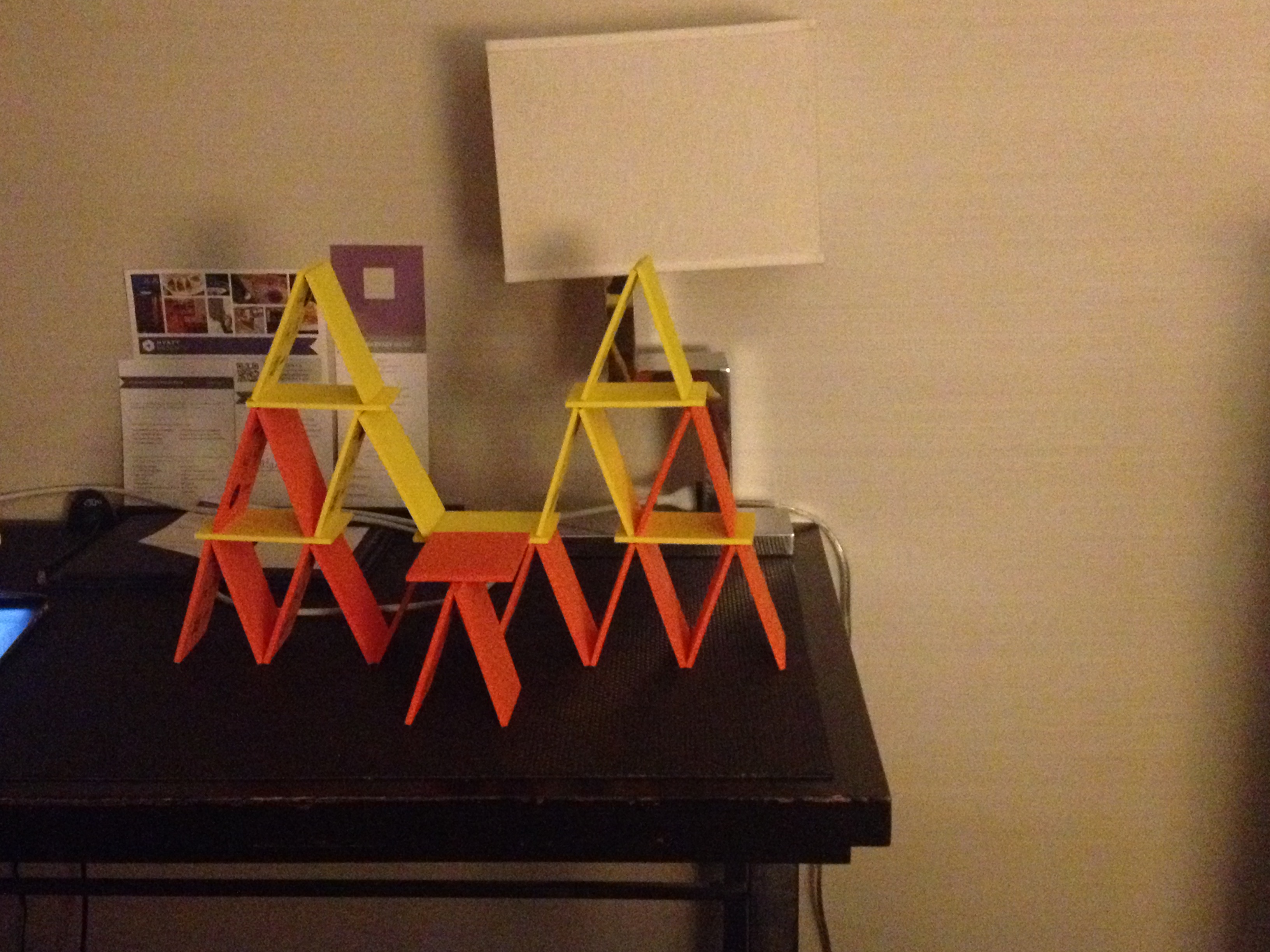 Super glad I went. Lots to think about over the next few weeks.