While I’ve wanted to climb one of the big Cascades peaks ever since moving to Oregon, the story of this hike really starts last Thursday, when my son wasn’t in the mood to sleep.

I went to bed around 11:30 that night, having stayed up getting everything ready for the weekend. Jillian tried setting Hudson down around midnight. There were a few blissful moments, but he was soon fussing. By 12:30, everyone was awake and Jillian and I were deep in conversation about our child’s desire to stay up until 3am.

Around 1, despite feeding, burping, and a diaper change, Hudson was still wide eyed and wanting to interact. I put him in the swing, put 8 hours of forest sounds on for him to listen to, and then laid down on camping pad where he could still see me and tried to sleep. Of course, by then, I was so awake that despite Hudson sleeping quite well, I laid awake for hours.

Our friend Mike drove down from Portland on Friday to spend the night before an early start Saturday. By the time he’d arrived and we’d squared away our gear it was almost 11. Jillian volunteered to camp out in the nursery with Hudson we could get some rest – I couldn’t afford another night like the previous one.

Except I couldn’t sleep. Honestly, I think it might have been because I couldn’t hear Hudson. When my alarm chirped at 3:30, I’d only gotten an hour or two. Any other day I’d have rolled over and gotten some sleep, because two terrible nights in a row is asking for trouble. But this was the only weekend I could get into the woods all summer; Jillian’s family was in town, and they’d be able to help her with Hudson. I got up.

Despite arriving before sunrise, the parking lot was full, and we had to park with a number of other cars along the side of the entrance. It was around freezing, so we bundled up as we headed out. By afternoon, when temperatures reached 90, Mike certainly didn’t need his puffy jacket and I was glad to have depended on only a hat and gloves. 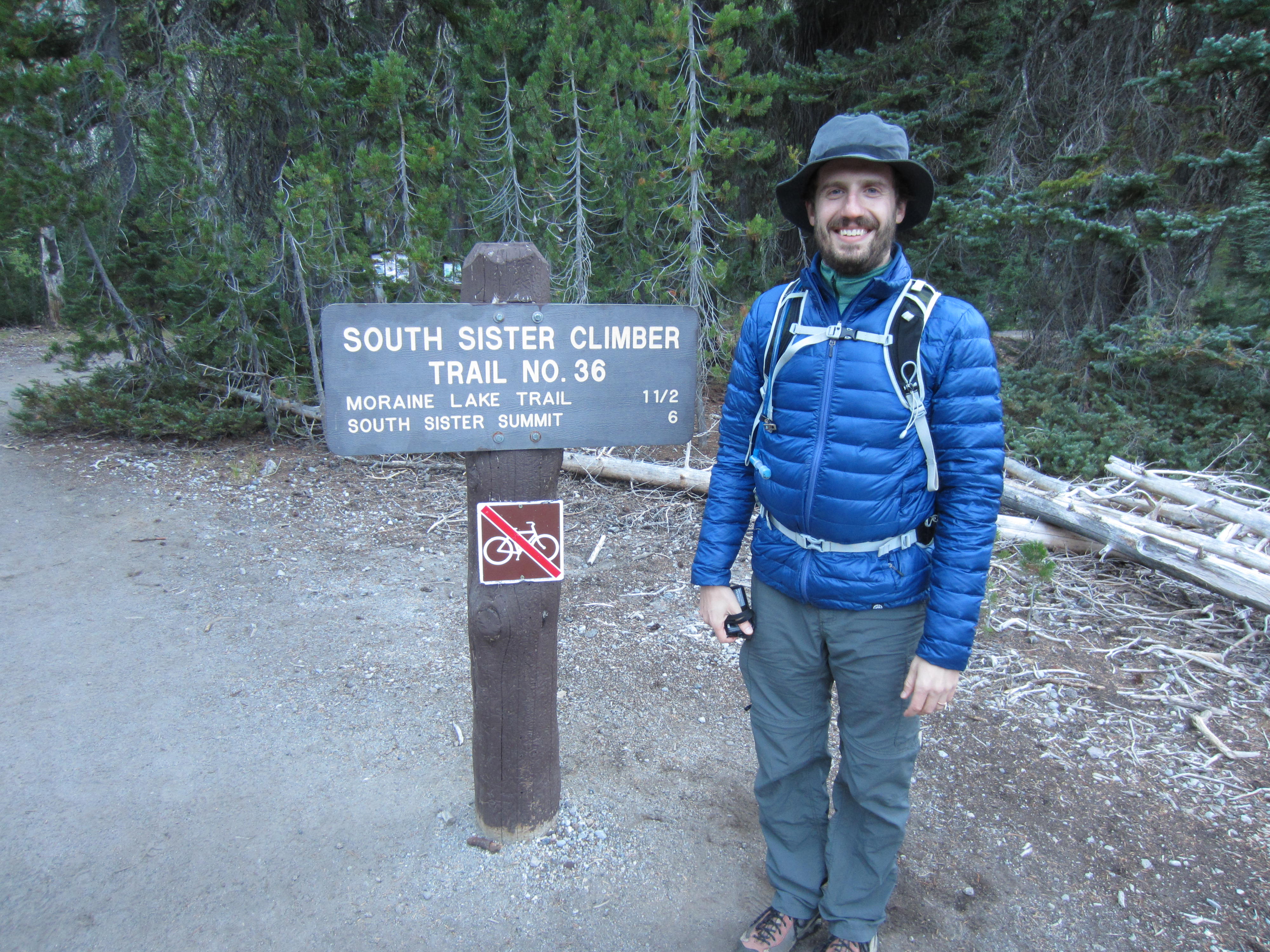 We took the South Side Route, which has an excellent map on Karl Helser’s website. As predicted by the state of the parking lot, it was a very popular route. Seeing crowds like this (shot at the trail junction to Moraine Lake) at every stop took something away from being out in the woods: 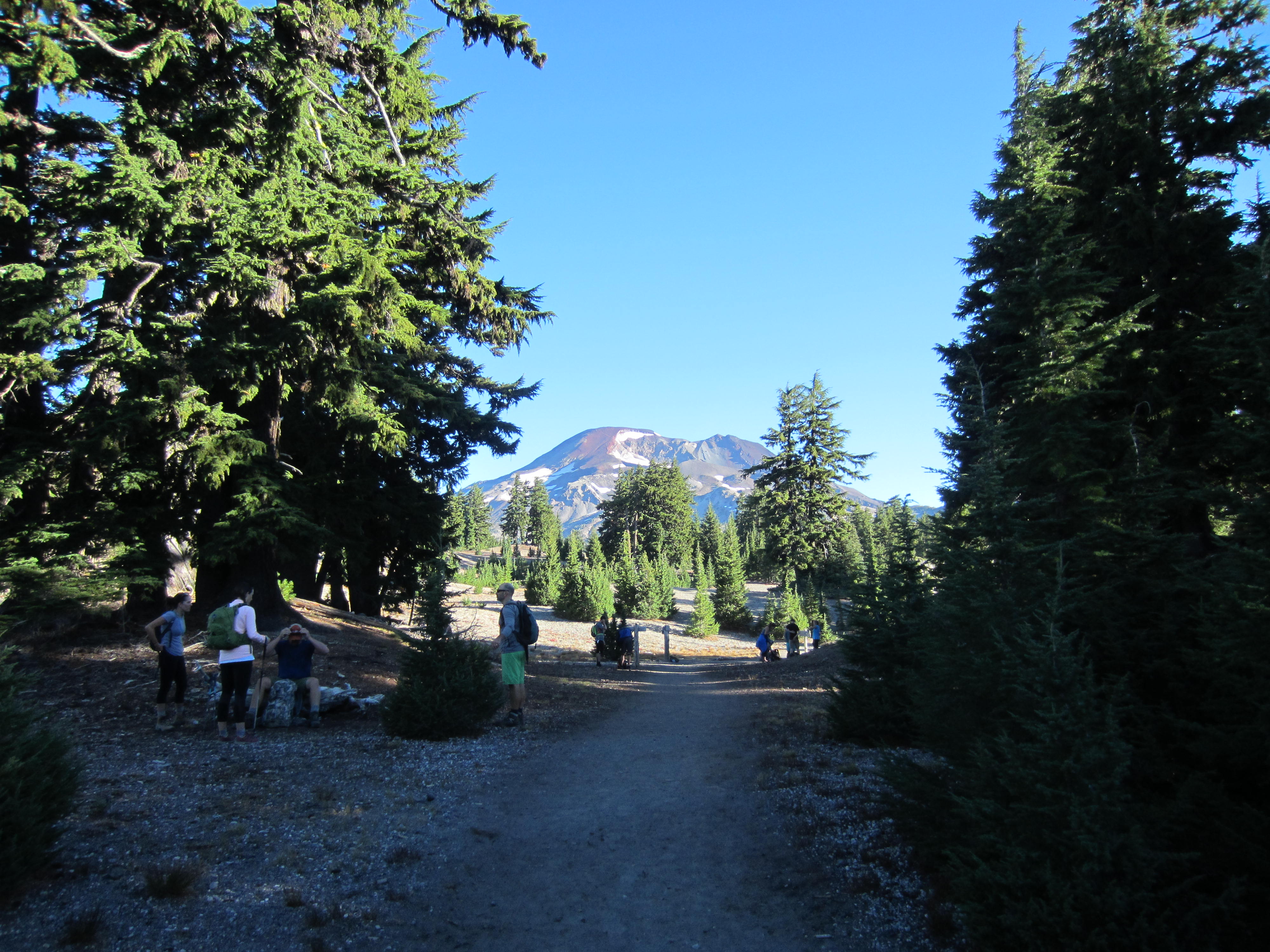 Next was a gentle walk on the golf course, where the trail was wide enough to walk two abreast. 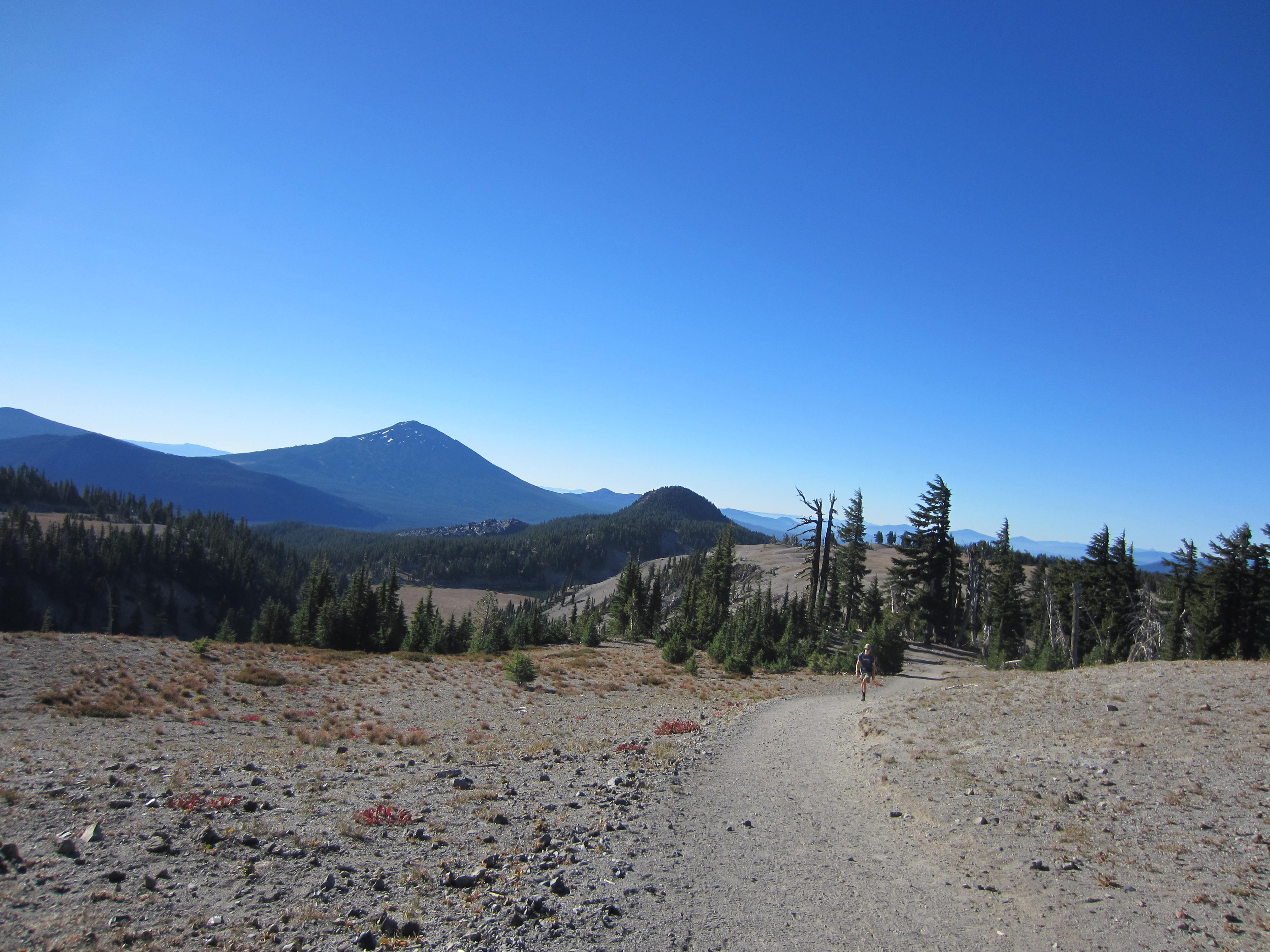 Of course, soon it was time to head back uphill. The trail was broken gray rock for about a thousand vertical feet. 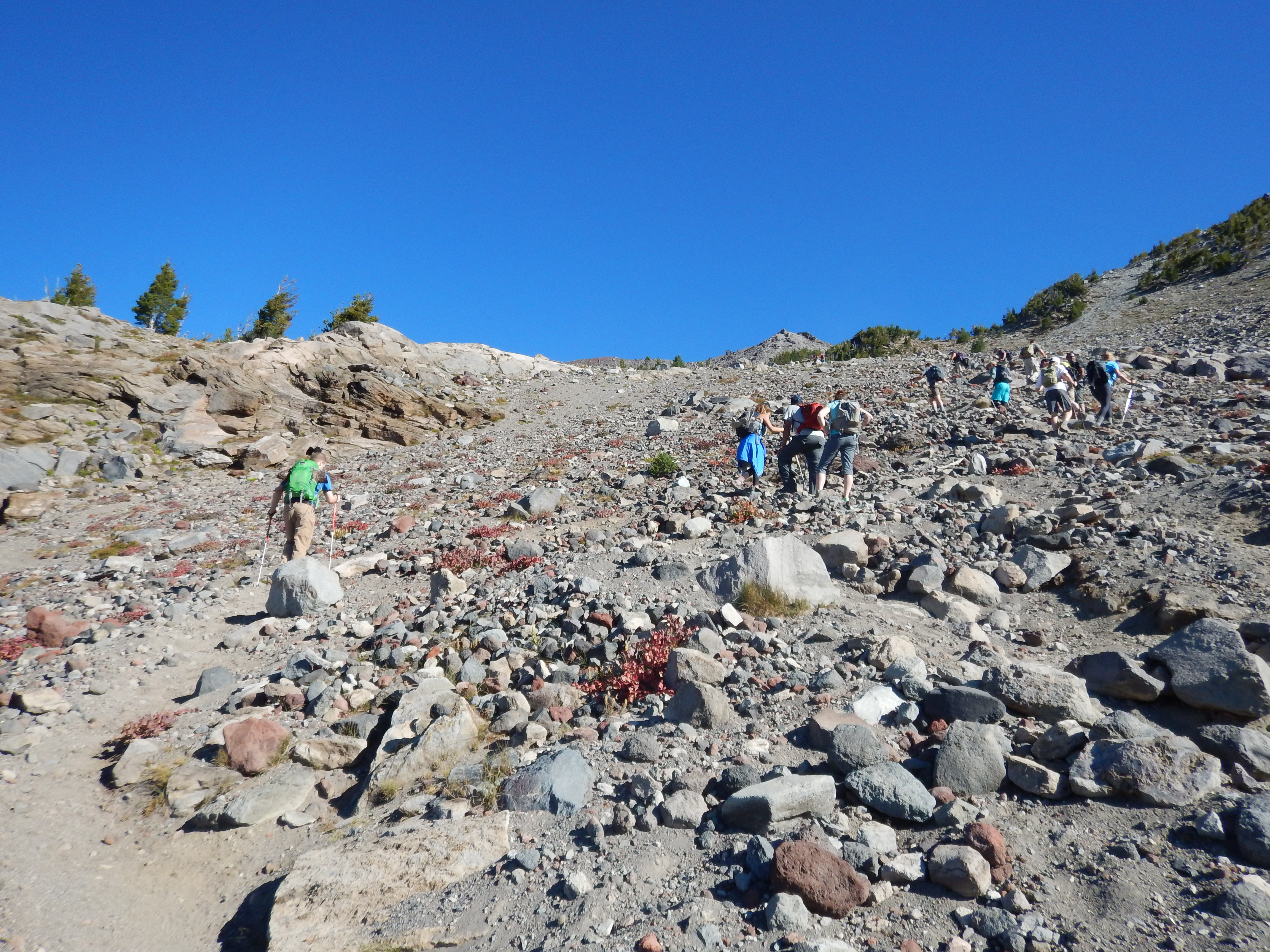 For most of my adult life I’ve had problems with my plantar fascia. At its worst, after walking even a quarter mile I’d feel a tearing sensation on the bottom of my foot, and I’d be forced to hobble home. After seeing a doctor who recommended surgery, I instead read Chris McDougall’s Born to Run and started down the path of barefoot travel. It took me a few years, but I’d finally reached a point where I could walk around town in my Five Fingers without issue for at least a few miles.

Since South Sister is an 11 mile round trip hike, I wanted as much assurance as possible that I wouldn’t feel the tear and need to limp home. As long as the trail was dirt or crushed stone, I’d been wearing my Five Fingers to try to prevent problems. But on gravel, my shoes were rapidly filling with little stones, which can lead to a whole new set of problems.

Just above 8000 feet we stopped at a common lunch spot, overlooking a little late below Lewis Glacier. 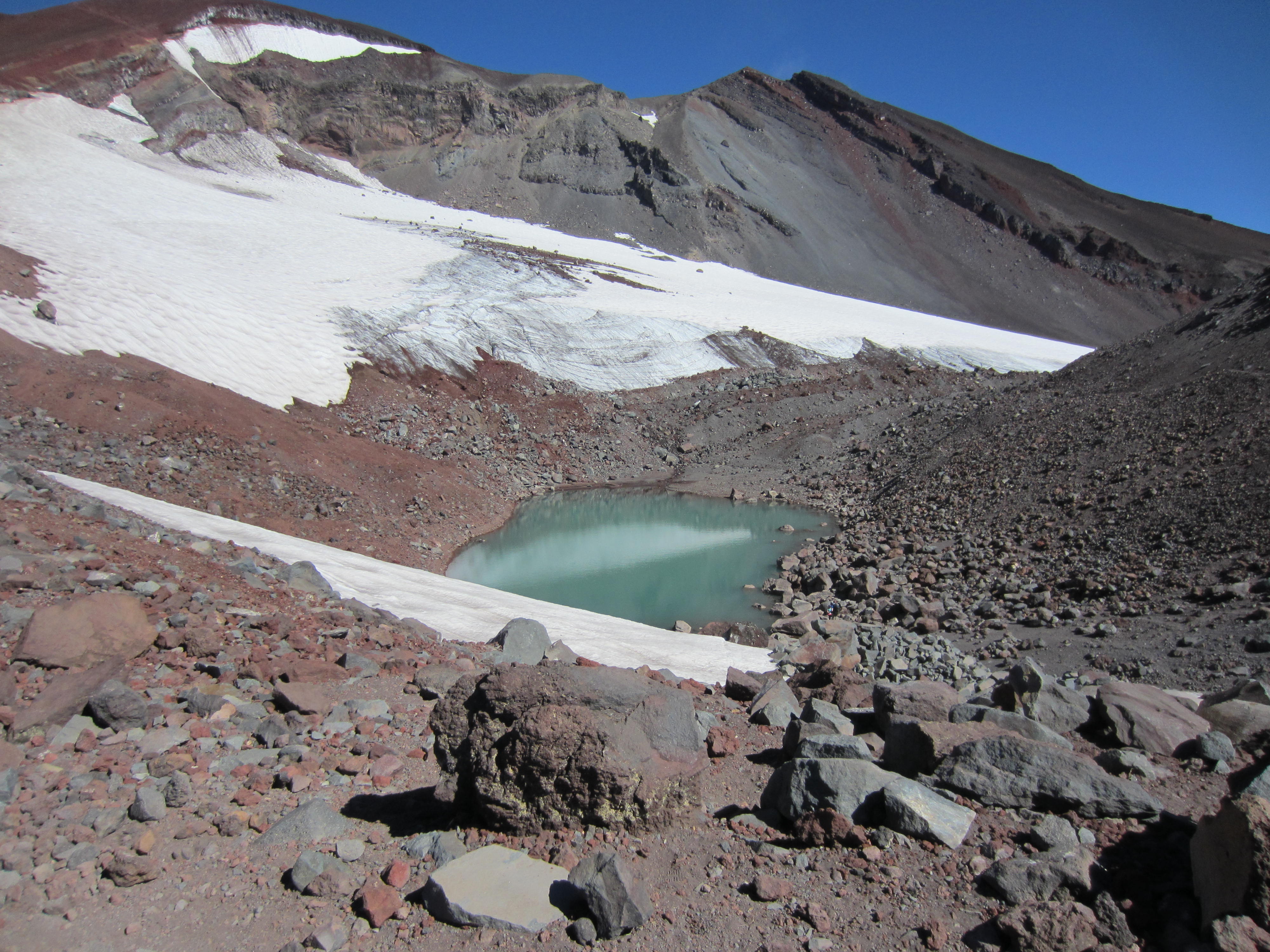 Before we started moving again, I switched over to my Vivobarefoot Trackers. They’re as close to barefoot boots as I can find, and when I added some snow gaiters, I had no rock issues the rest of the hike.

But I did have altitude issues. By the time we’d gotten to this ridge, I was starting to feel a headache, and was having to stop every fifty vertical feet to let my heart rate slow down and catch my breath. I wasn’t feeling bad enough to turn around, so we pressed on.

From here things turned somehow even more sharply uphill, on an exposed scree slope. If you look closely, you can see people most of the way up the mountain. 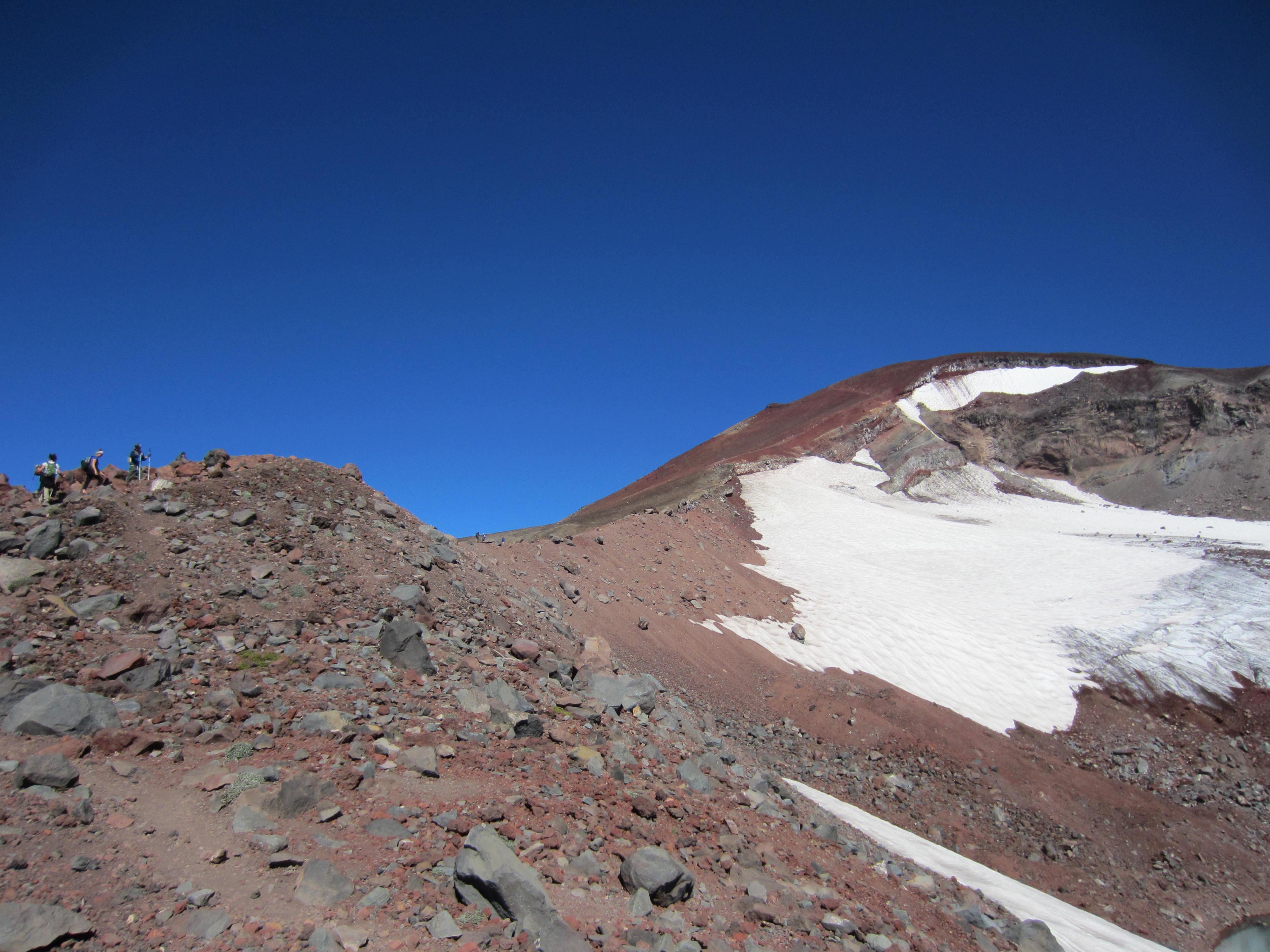 I didn’t realize how loose the rock was until the trip back down, but I’m glad we climbed in the morning, when everyone was moving slowly uphill. In the afternoon, when most people are coming off the mountain, there’s a lot of people who don’t pay attention to the danger posed by rocks they kick down the mountain while descending in a hurry.

I also stared to struggle with my knee. I’ve had trouble with my left knee for twenty years, and I’m actually pretty happy to have made it to over 9000 feet without any problems. I might look into knee sleeves to see if adding some compression around the knee helps to prevent issues, but without the discomfort that comes with a brace. I was happy to be hiking with trekking poles, which helped take some weight off my leg. 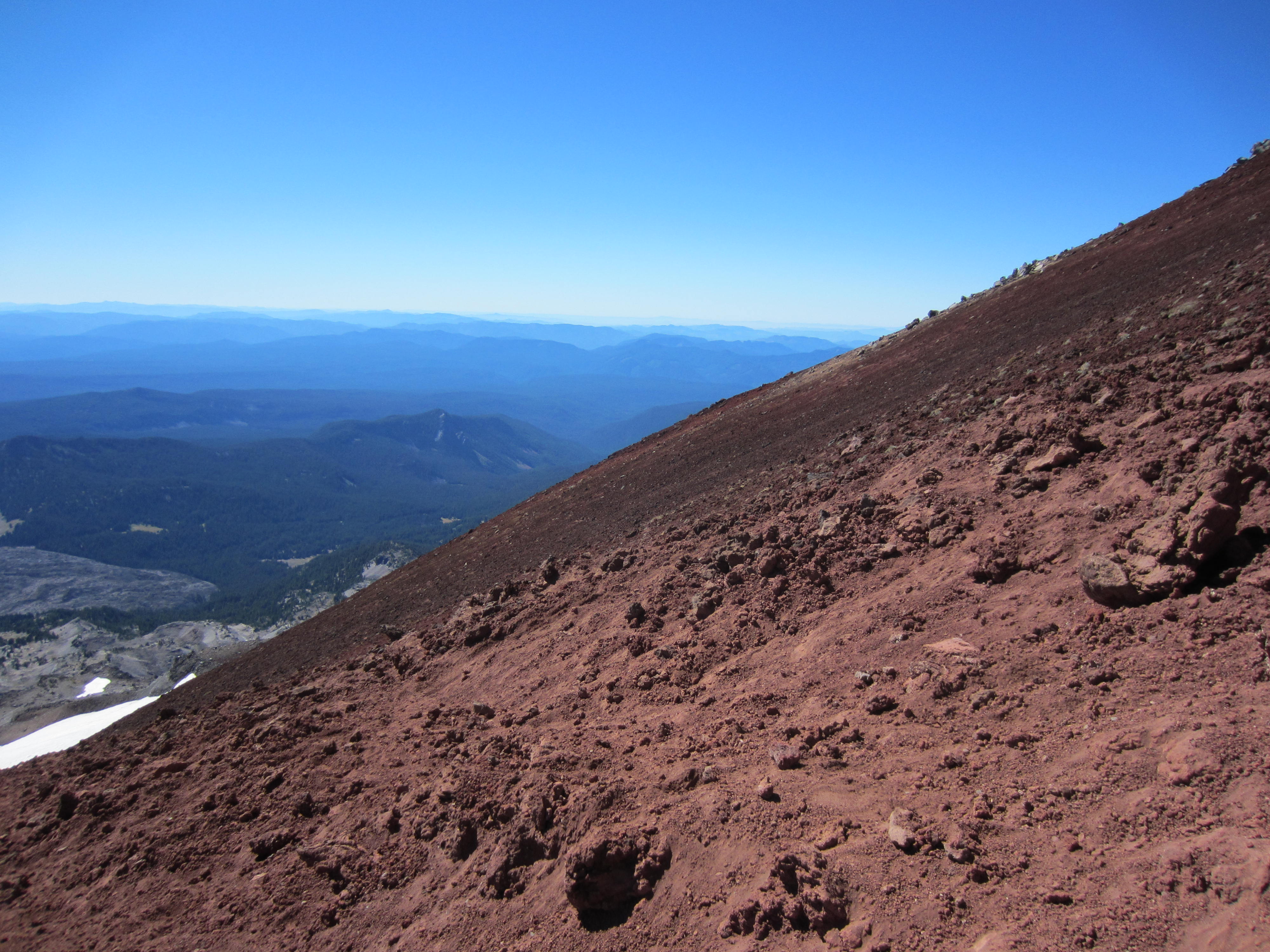 At some point I stopped to put my brace on, which helped keep my knee problems from getting any worse, but I still found myself favoring my right leg, to a point where by the end of the hike only my right leg was sore.

Though we were on one of the shortest section of the hike, we easily spent the most time here. In the last few hundred vertical feet I was stopping at every large rock. More worryingly, I started to feel like I was on the edge of nausea. At least the views were good. 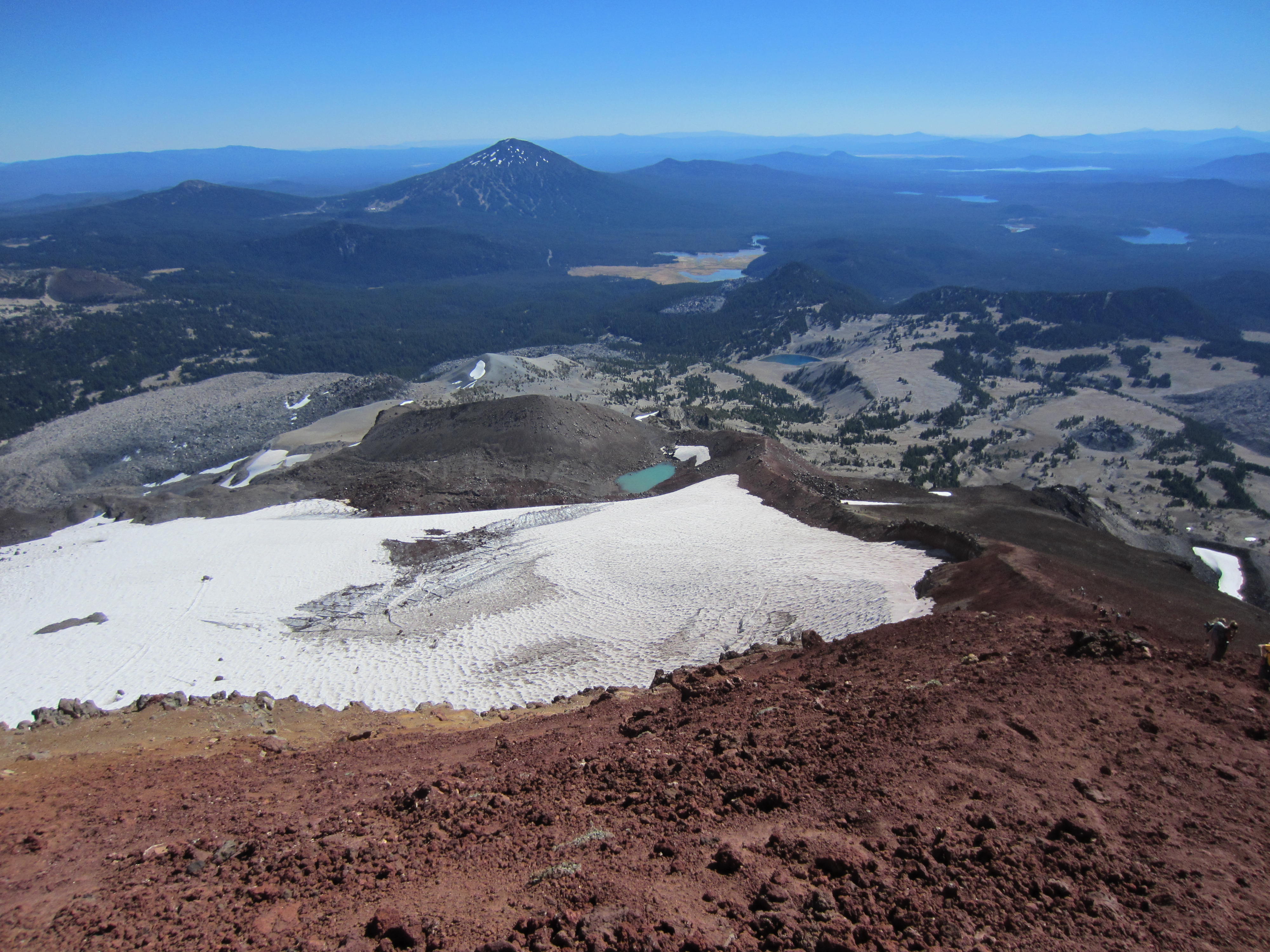 Despite my issues, we made it to the top. Mike was able to head out onto the ice. I stayed on the rim, since I’d left my sunglasses sitting on the table at home where I wouldn’t forget them. 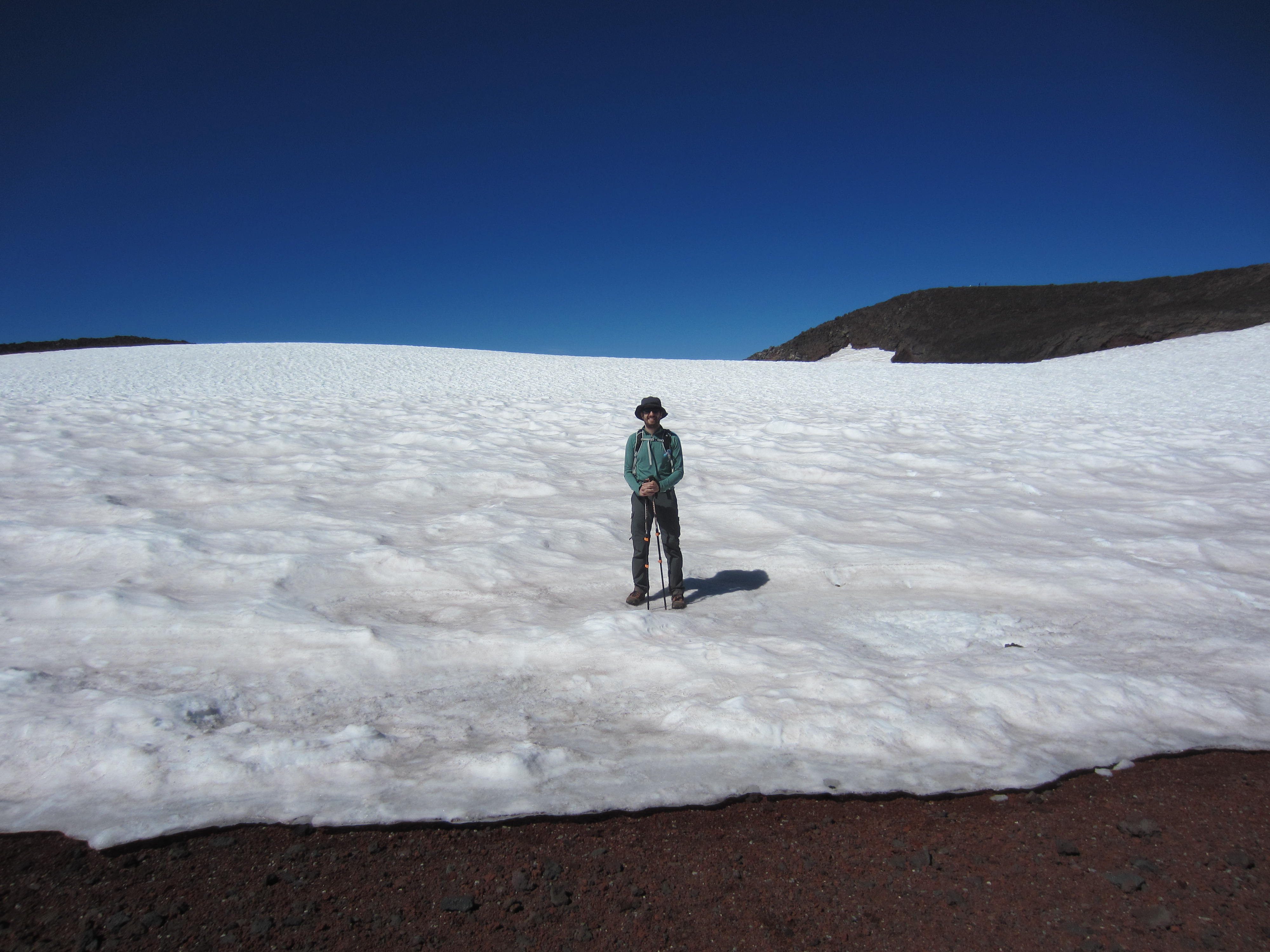 We saw one guy camping with his dog on the rim (though this picture features a different man and dog). That seems like a great way to explore this mountain. There’s a number of wind breaks built around the rim if you need some more cover, and the views would be absolutely spectacular at night. The official summit is about a hundred feet higher up, on the north side. Mike climbed it, while I napped on some rather sharp rocks, afraid to climb higher on my knee and with my altitude issues. I’m sure I could have made it, but it would have taken and hour and we were running out of time. We’d told our wives to get worried if they hadn’t heard from us by nine that evening. Though we’d be out of the woods by then, we were a two hour drive from cell service (T-Mobile’s service in the Oregon Woods is fairly deplorable). Since there was no question Mike could move a lot faster than me, he summited and reported he could see mountains on the north side of Hood, some 150 miles away.

Around two, we headed back down to the car. We’d returned to the lunch spot within an hour, and had dried salami, cheddar, and DIY Pesto pita sandwiches. A bit of rest, food, and the lower altitude made me feel a lot better. Some of that nausea feeling may have been my steady diet of bars all morning. Next hike, I’ll try to be a little more aggressive at having real food at breaks.

While I’d been hurting the whole way up, I was fine by the time we returned to 8000 feet, and it was Mike that was hurting on the way down. He’d developed some foot issues (though no sign of blisters) and each step hurt. And he wasn’t the only one. At least one group we passed on the way down was struggling to walk at all, and were very grateful for some Advil.

Heading back to the car, we passed a lot of people that caused us concern. There were people hiking in jeans, people in casual sneakers, people without enough water (we went through about 2.5 liters each), people heading for the rim far too late in the day, and people with backpacks more appropriate for a school bus. One man stood out in particular, who didn’t make it home that night, but who was carrying his partner’s backpack on his chest, and had a determined look on his face as he hiked fifty yards ahead of his partner toward the summit.

We were back at the car by six, enjoying Powerade and homemade cookies from our cooler. Despite drinking more or less constantly, neither of us had needed to stop on the side of the trail since seven that morning, meaning we should have drank quite a bit more. I was also very sunburned, even though I’d put sunscreen on somewhat regularly. I’m now in the market for a hat for further hikes at altitude.

Right as we entered Eugene, around 8:45 that evening, we finally had cell service and were able to get a message to our wives and let them know where we were. I may need to switch back to Sprint’s network before my next hike outside greater Eugene.