A while back I stumbled across a YouTube video of a man cooking possibly the most ridiculous dish I’d ever seen.

Naturally, I had to try making one.

After watching the video a half dozen times, it was time to recruit some help. There was simply no way I was going to make that entire dish by myself, especially with an infant in the house. Kate, from previous adventures, stepped up.

Fortunately for us, the producer of that video had posted the entire recipe on reddit. After a combined three trips to different grocery stores to find everything, we got together at 10am on a Sunday morning to get started.

Just like in the video, first step was to get the sauce going. We used one giant onion quartered. A medium onion halved would have probably been better. 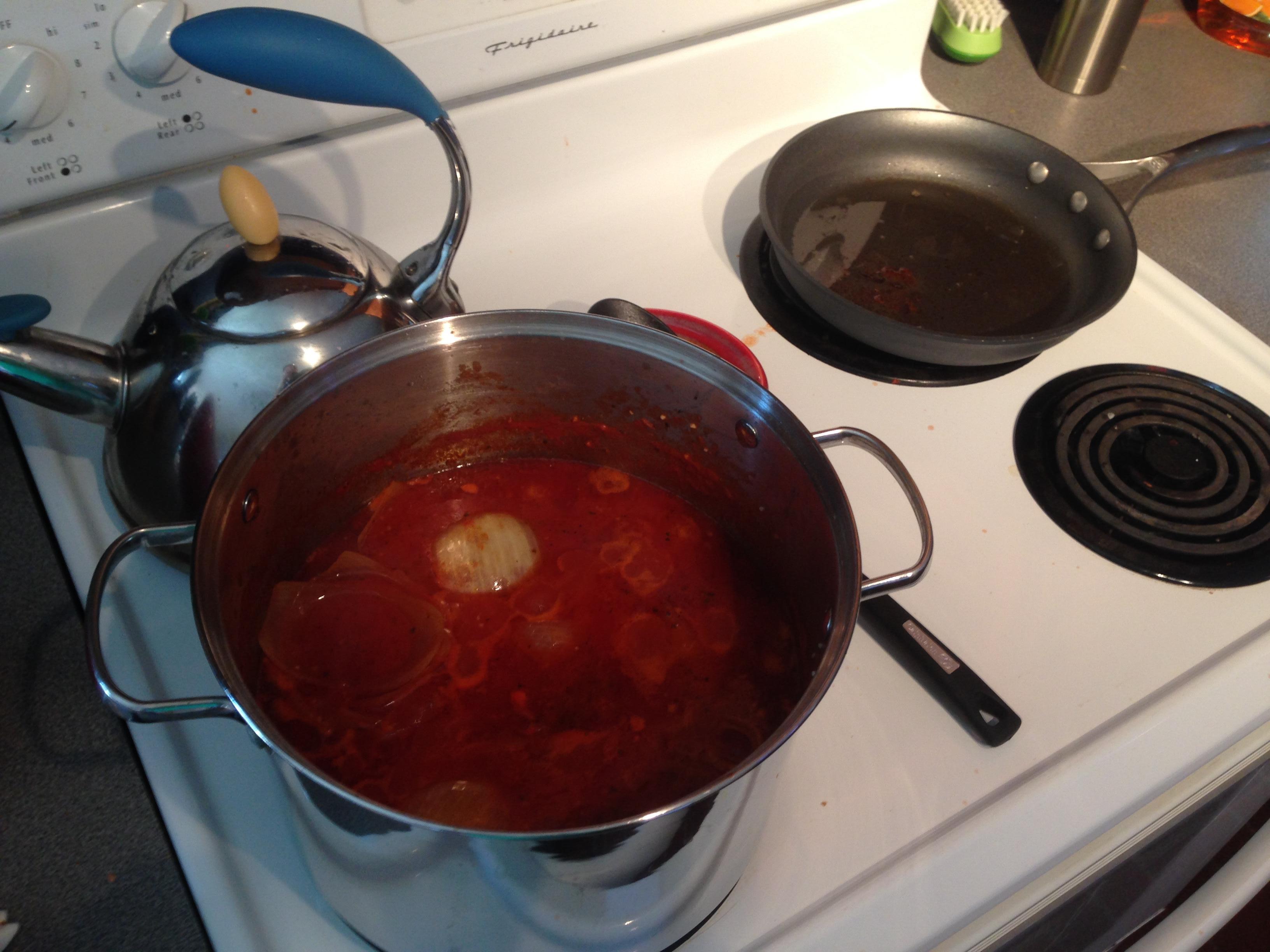 Next step was to start the meatballs. A couple changes had to happen here. We’d originally planned to buy cuts of meat and grind them in my food processor, just like in the videos. But Cuisinart put a stop to that. Finding ground beef and pork was easy. We decided to substitute some bulk Italian sausage for the short rib, and after Kate consulted at length with the butcher at Market of Choice, he recommended we substitute a meatloaf ground meat mix for the veal.

Unfortunately, I’m also without a stand mixer, so we tried to make due with my hand mixer. Shortly afterward, I thoroughly cleaned my kitchen walls. Kate then rolled all our meatballs. 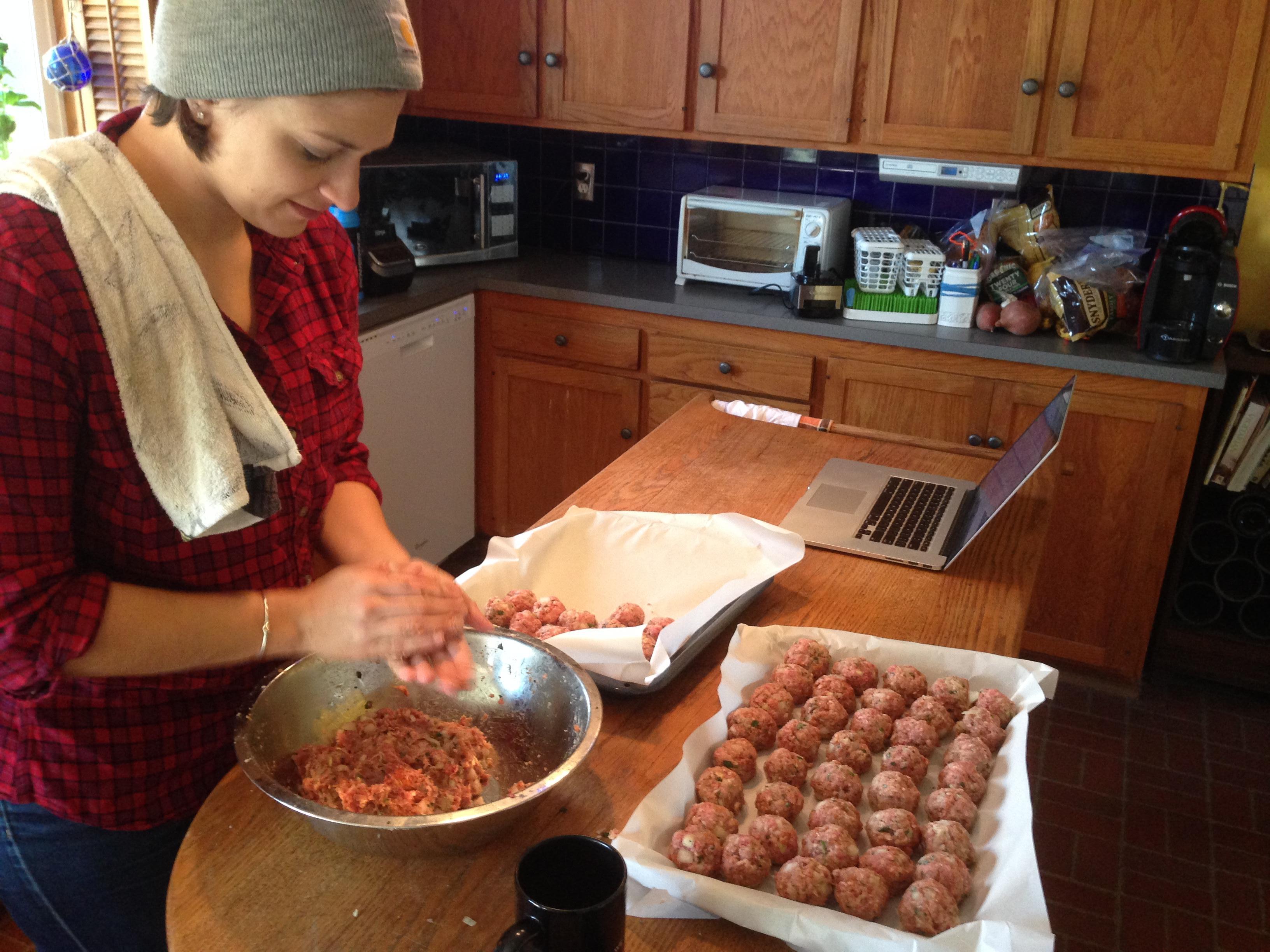 Because I don’t own a gnocchi striper and we didn’t want to start this whole process a day early (to give the pasta time to dry), we just used some fancy fusilli and skipped that entire step. That gave us two hours to have some lunch and do some completely unrelated computer work.

Here’s a time lapse of everything so far, including a couple trips by me to come over and feed Hudson. Sorry about the quality, this was shot with a web cam and a shell script.

Next step was our dough. We were actually using Tipo 00 flour, which has a really great consistency like sand. The recipe called for 15oz of flour, which I needed to convert into cups. I did some math and came up with 3¼ cups. We ended up with the strangest dough consistency we could imagine. We consulted the video, and he adds not only egg, but also oil (whereas in the recipe, he only calls for egg). We added oil. Still weird. Then we added more eggs, and wound up with a vaguely doughy mass with egg all over my counter. Time to try again.

I made a fourth trip to the grocery store and grabbed the last bag of Tipo 00 flour as well as another dozen eggs. Meanwhile, Kate took a crash YouTube course on how to make dough.

When I got home, the first thing I checked was my math. Totally wrong. We only needed 1⅞ cups. The new dough was so much easier to work with. 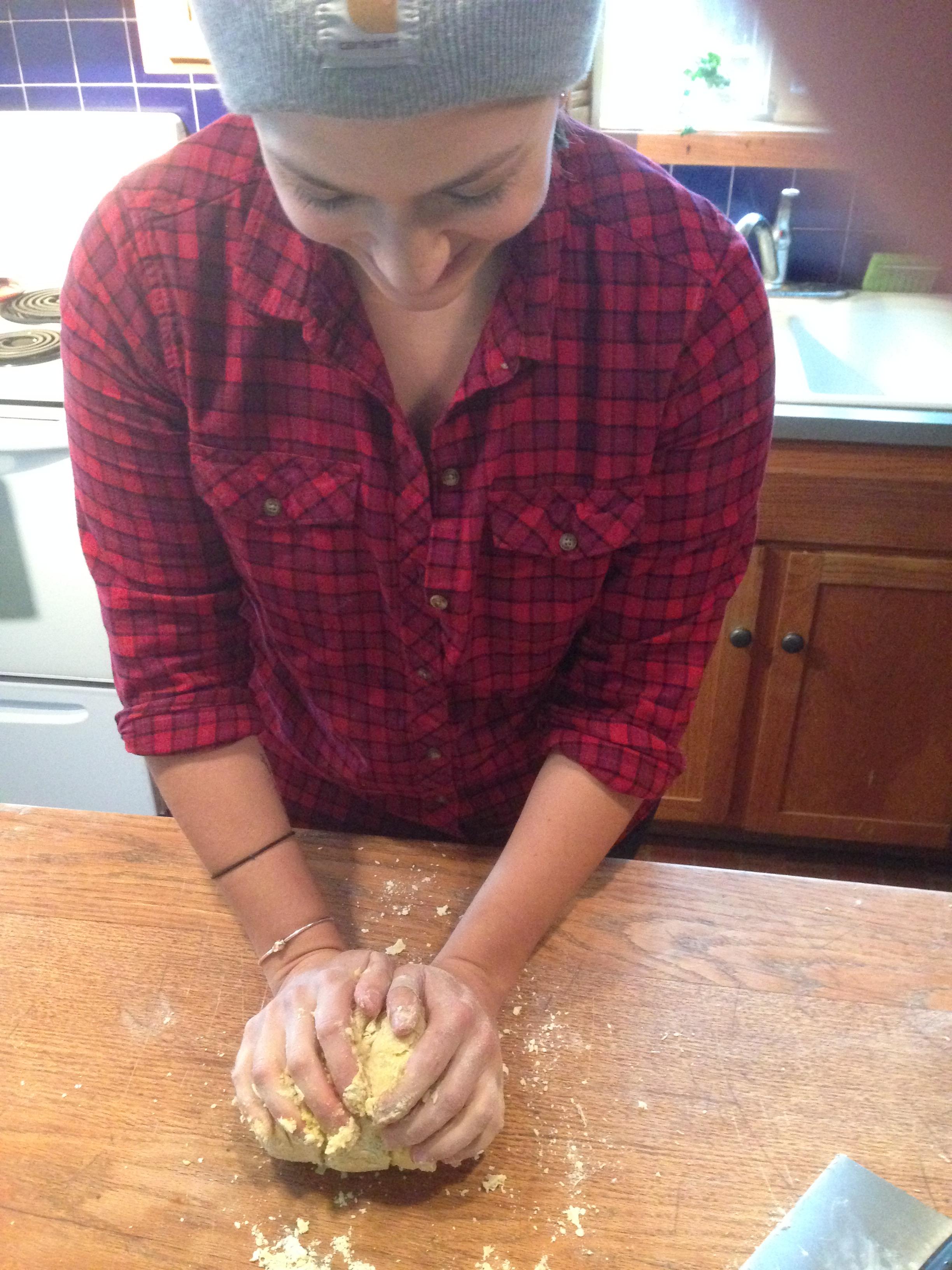 After letting the dough sit plastic wrapped for half an hour, we rolled it until we could just make out the surface below it. 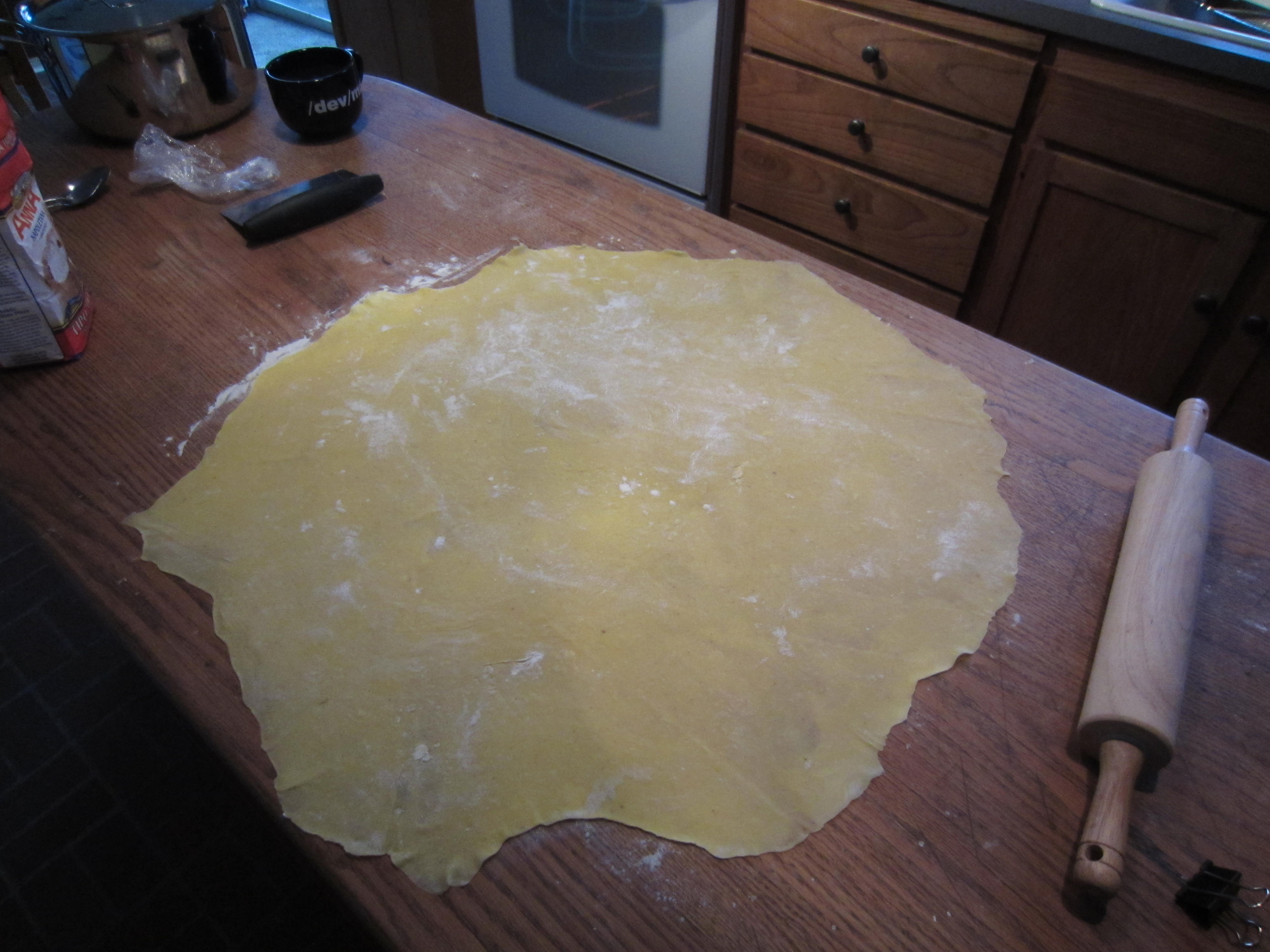 And then time to carefully roll and unroll the dough.

Once the dough was rolled, it was time to layer and fill. Hudson helped supervise. 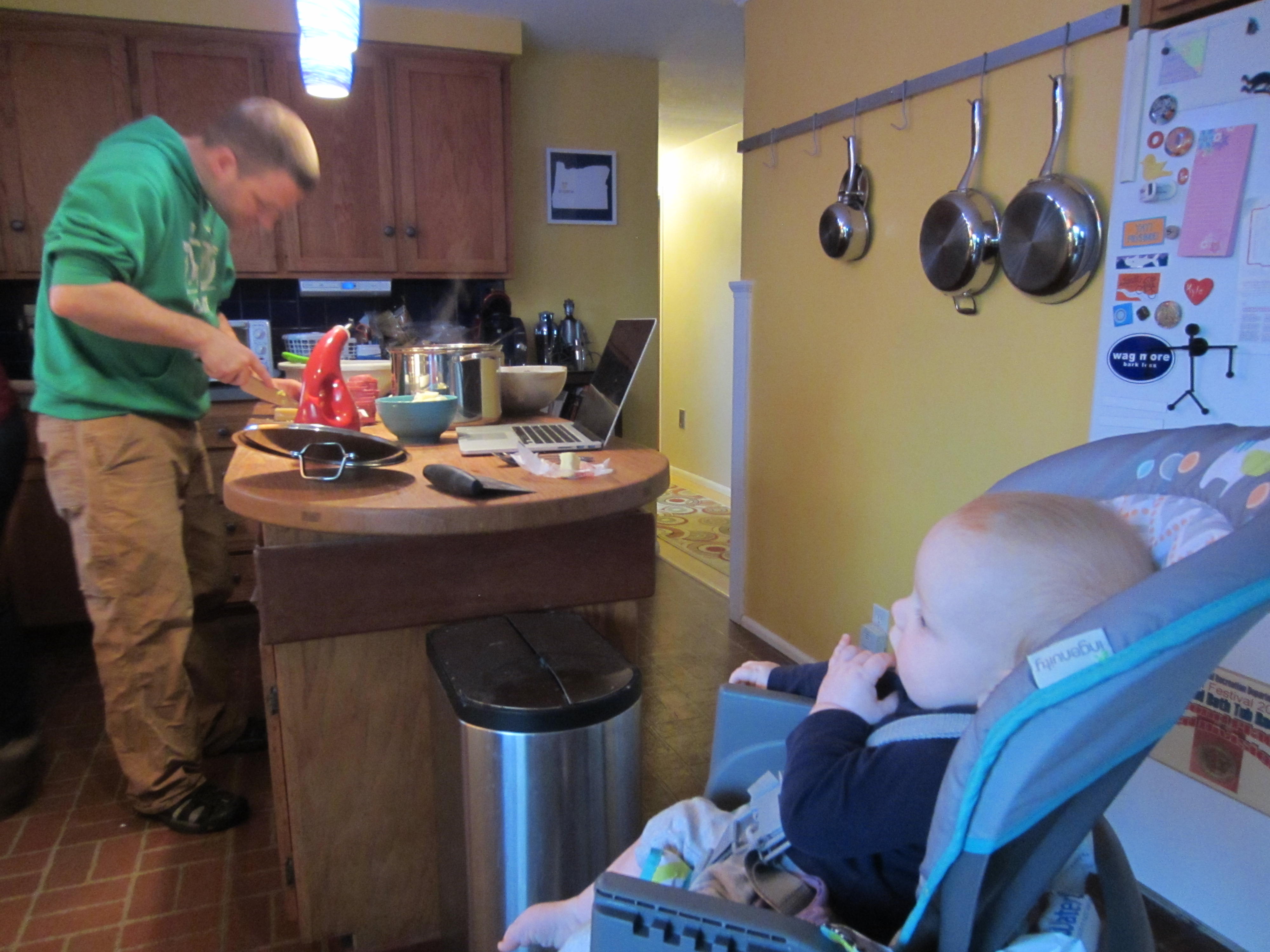 There was a lot of layering to be done. 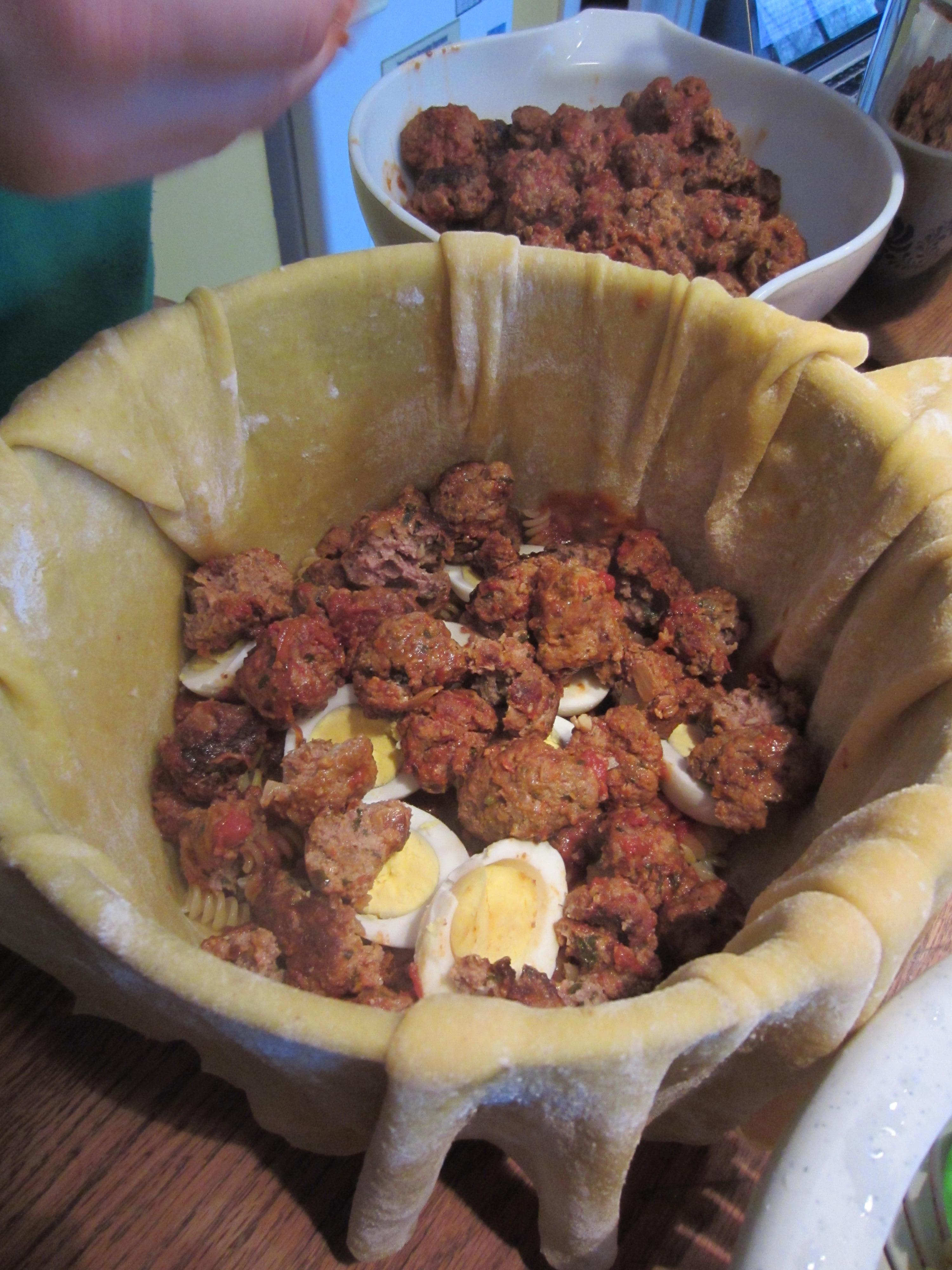 A lot of layering. 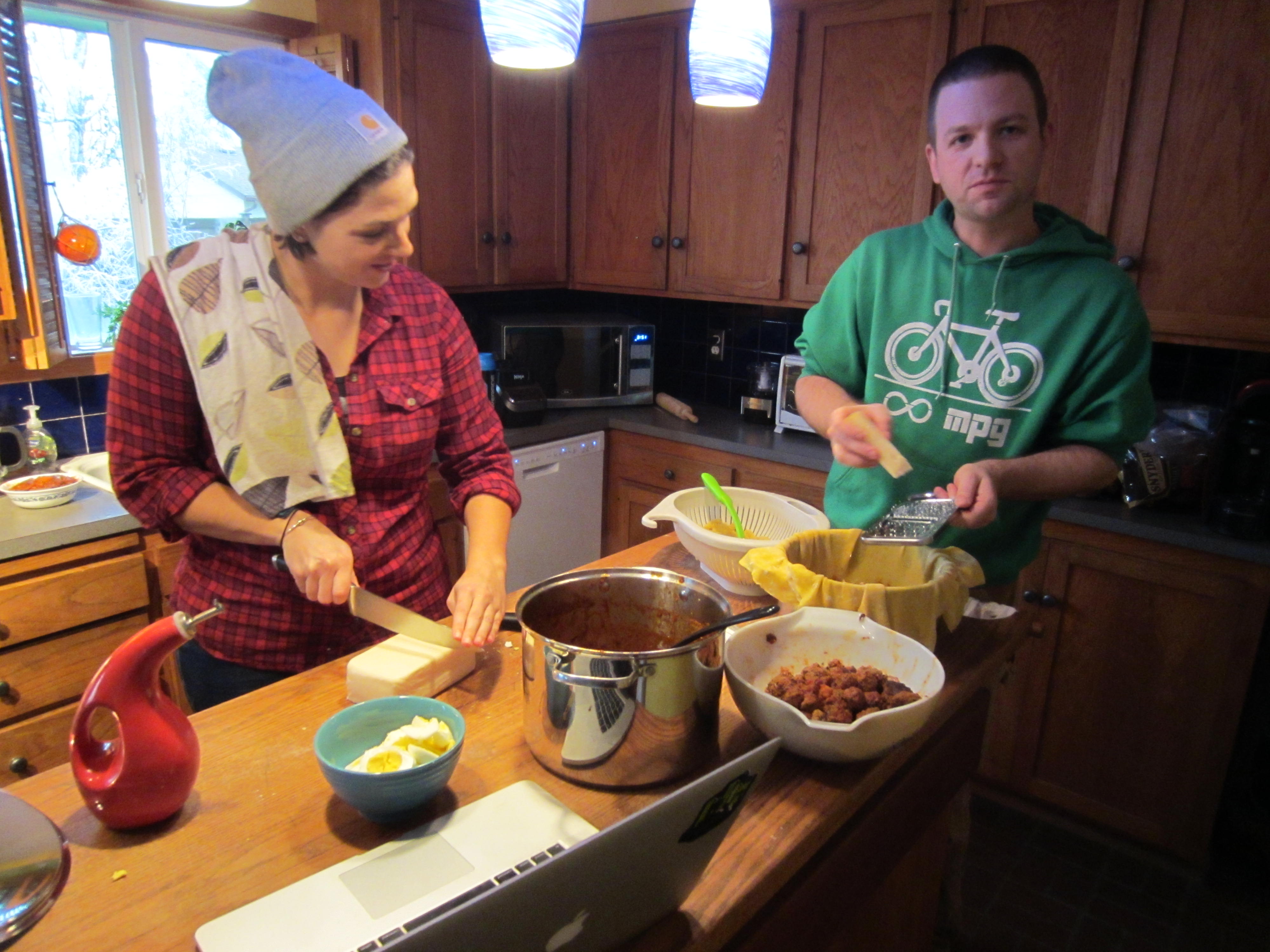 Rather than use a dutch oven, we simply used a large sauce pan. But we still had some great color when it came out. 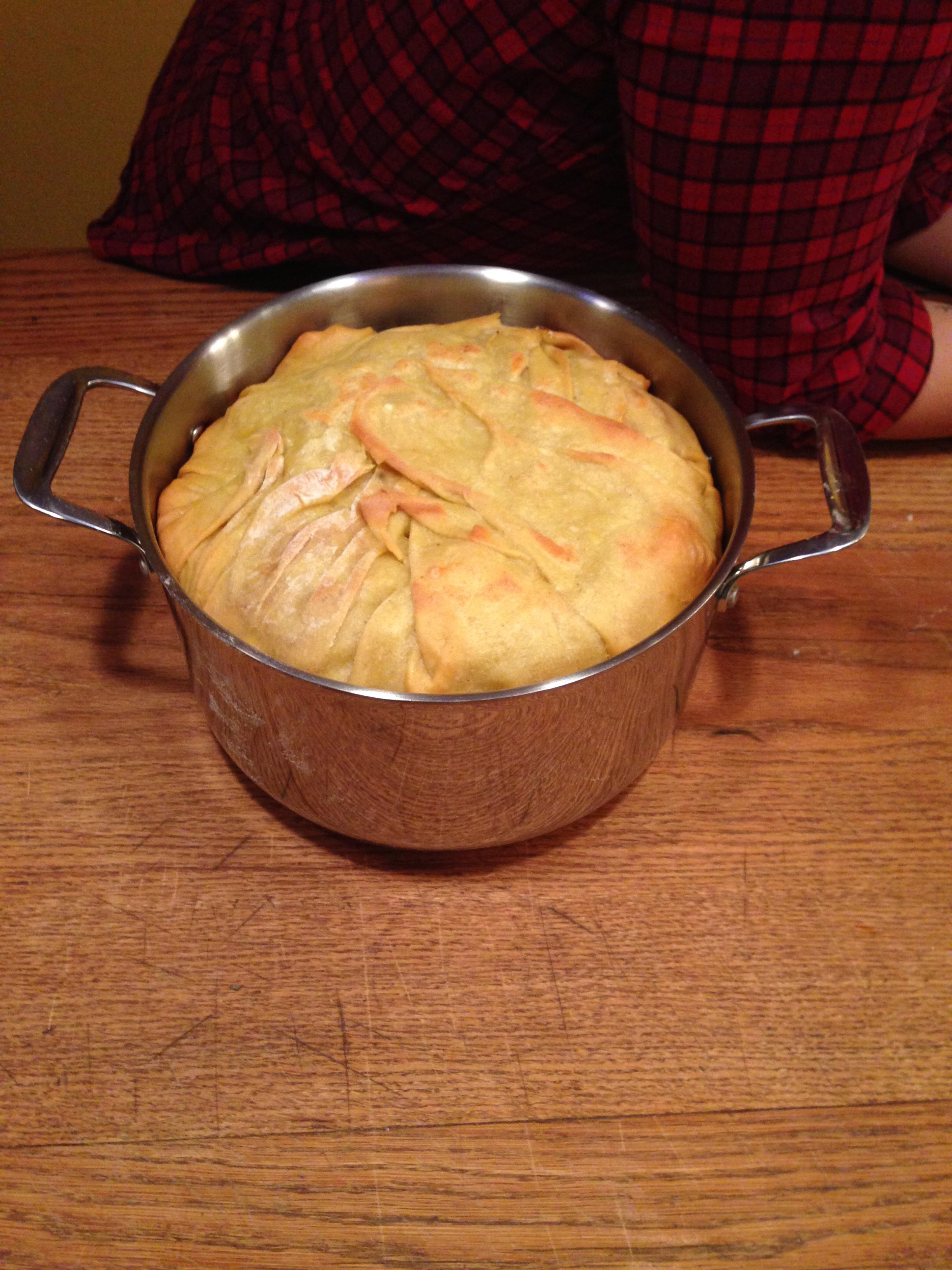 Then it was time for the flip and reveal

In retrospect, I think we’d should have made the dough a little thicker and used a little more butter on the inside of the pan. Our layers weren’t quite as well defined as I’d wanted, but I’m still happy with it. 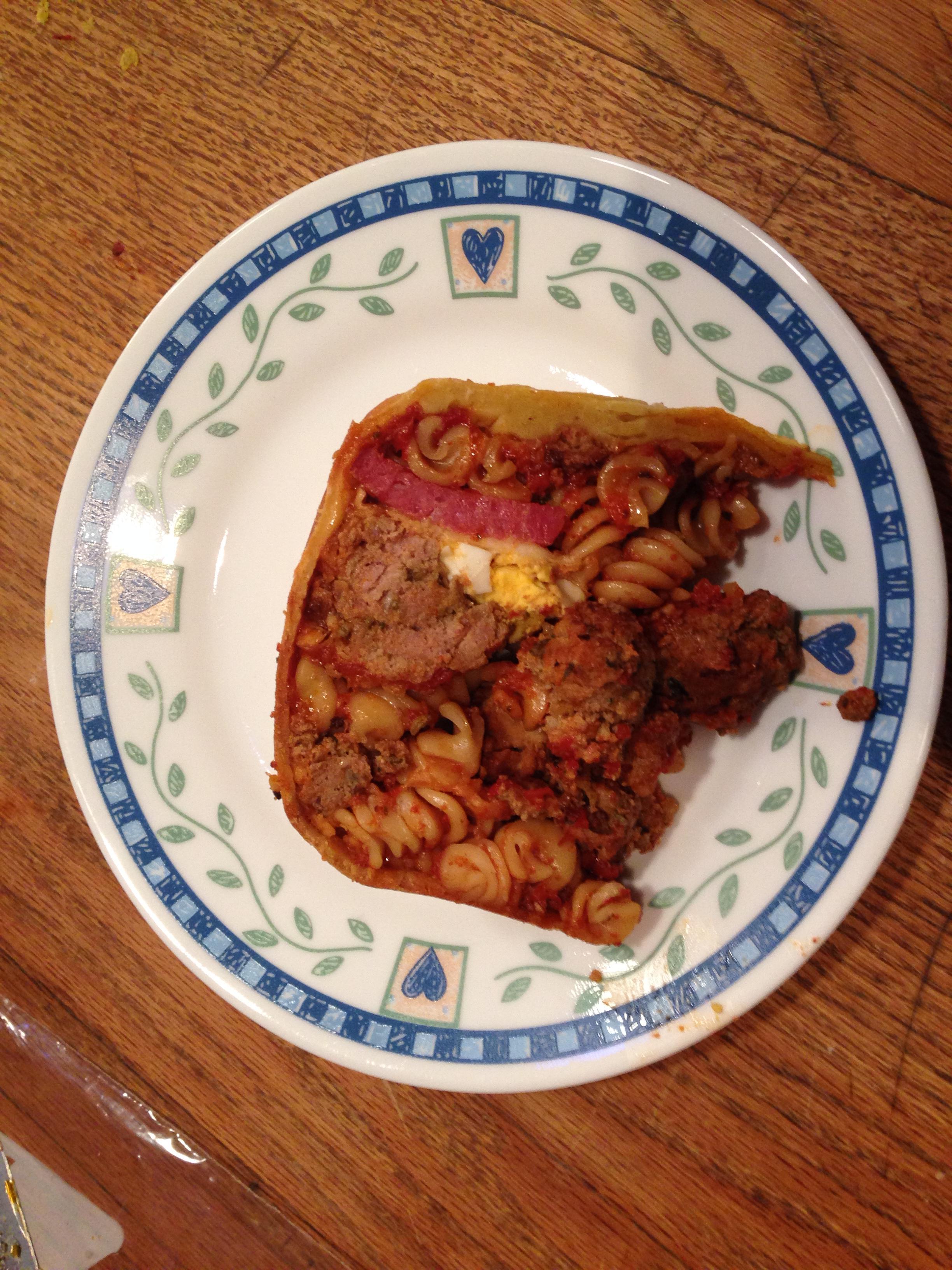 Somehow, it really was different than just a Italian lasagna cake. The egg was a surprising addition, but good. But the whole thing was dense. The five of us could hardly make a dent. 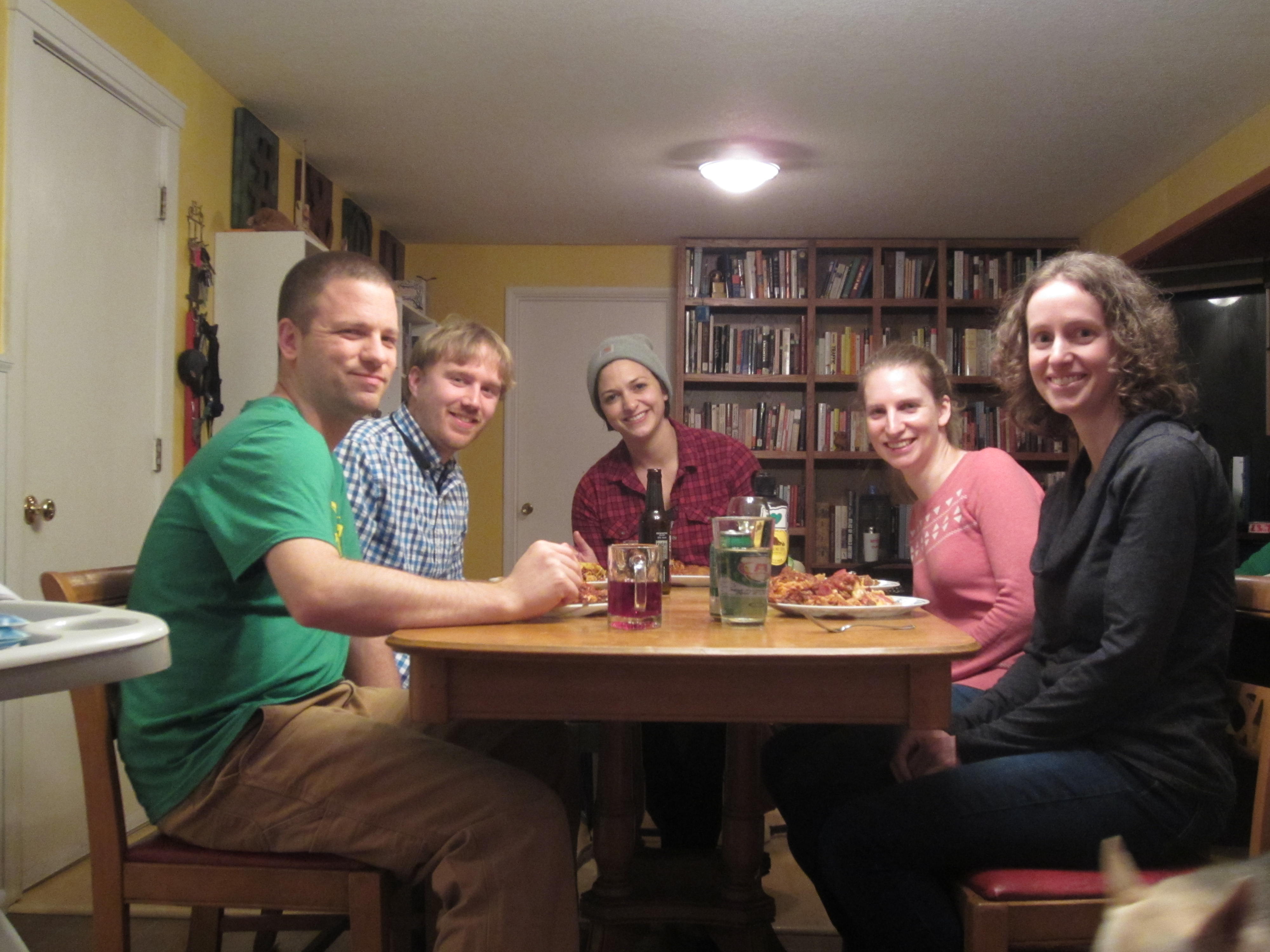 There’s also an album of images from this adventure.