Last year, we made a Timpano, based on the recipe provided in a Binging with Babish episode. Kate and I wanted to have another go at it, and see if we could do any better.

We started our sauce at 9am. 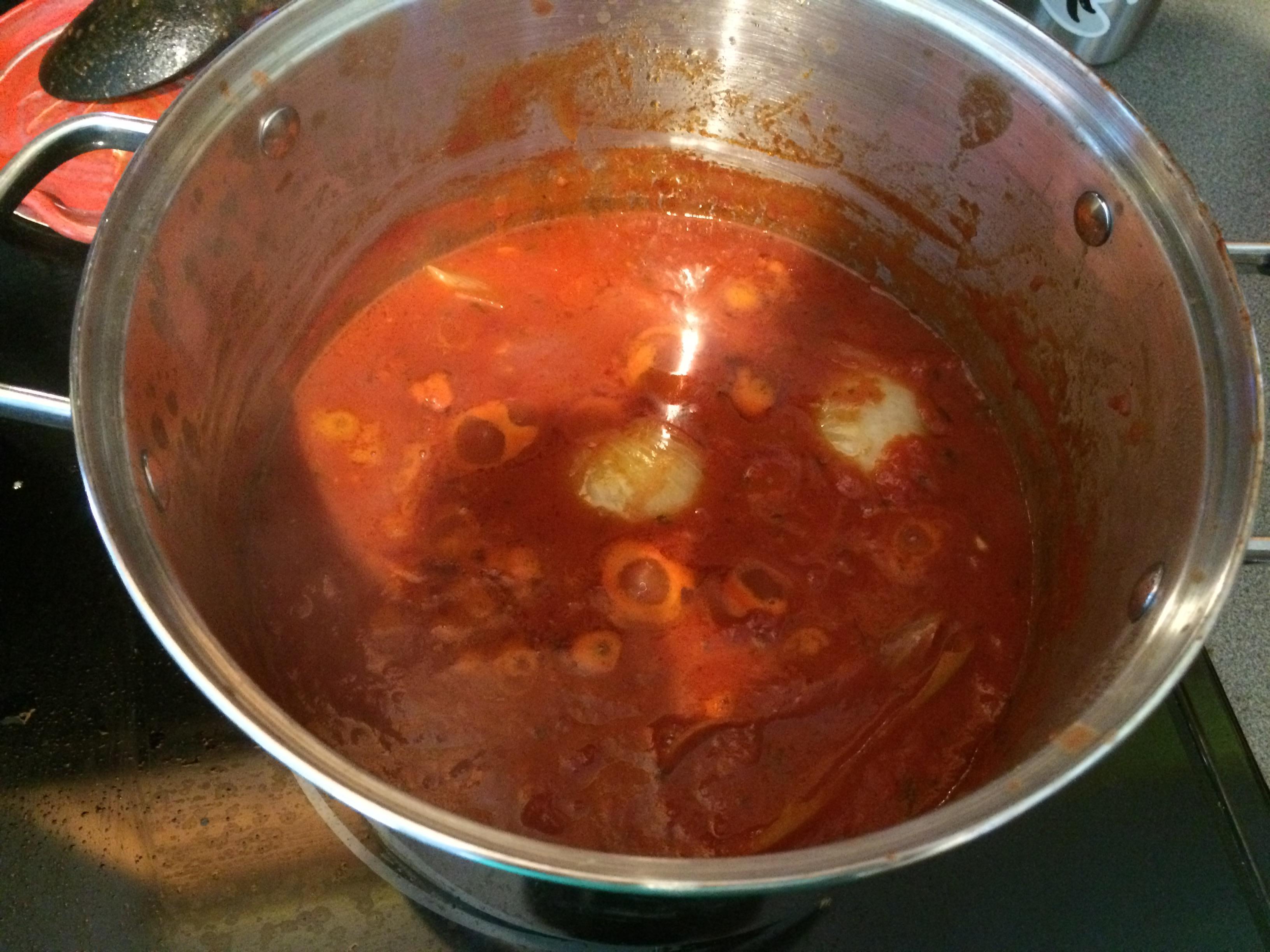 My sister was kind enough to loan us her KitchenAid, which made making meatballs much easier. No need to clean any meat off the walls this year. 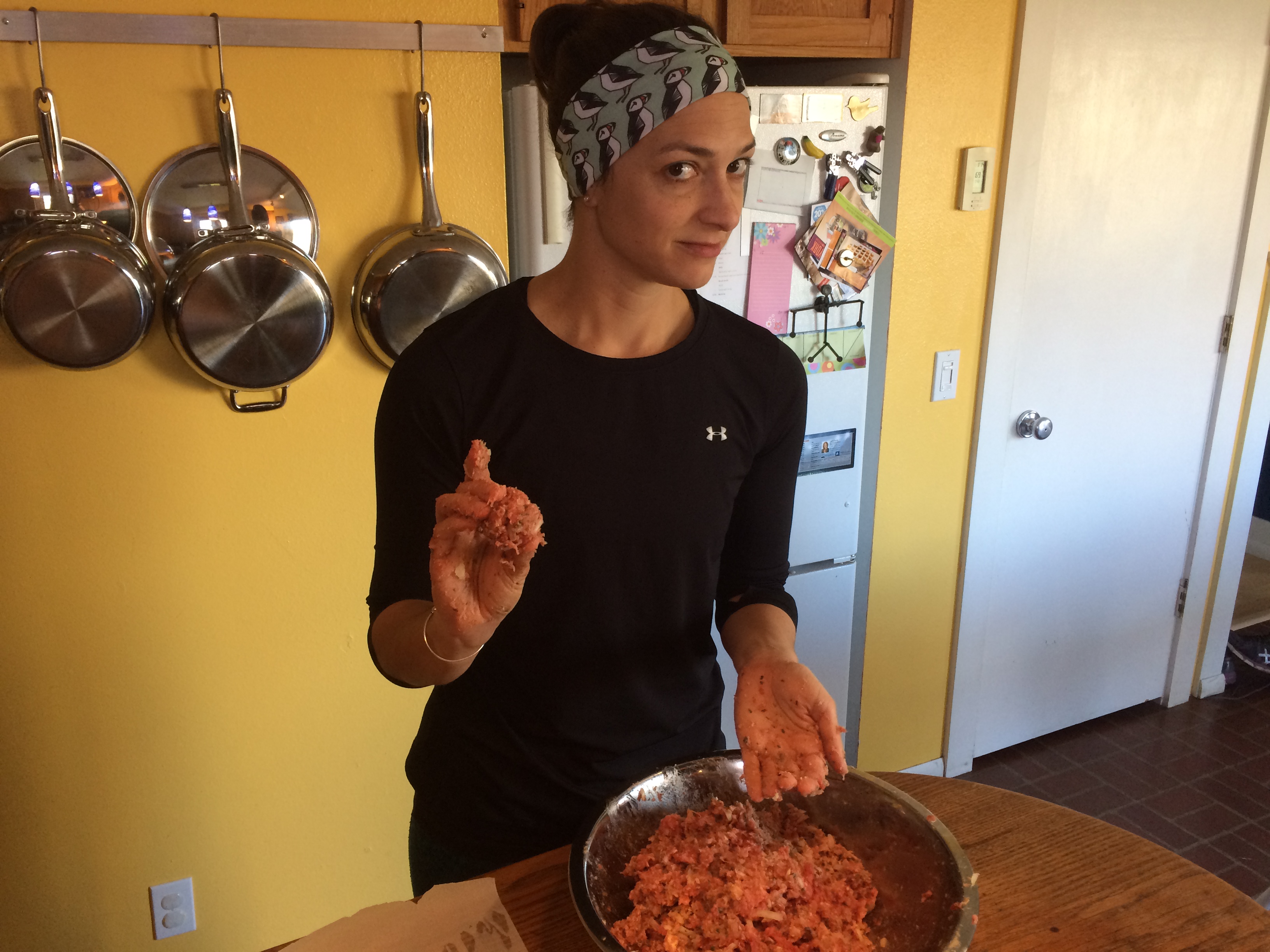 We also upped the quality of meat, including grinding our own chuck with some awesome meat from friends down in Roseburg. No sausage or meatloaf this year: we used veal, pork, and chuck. 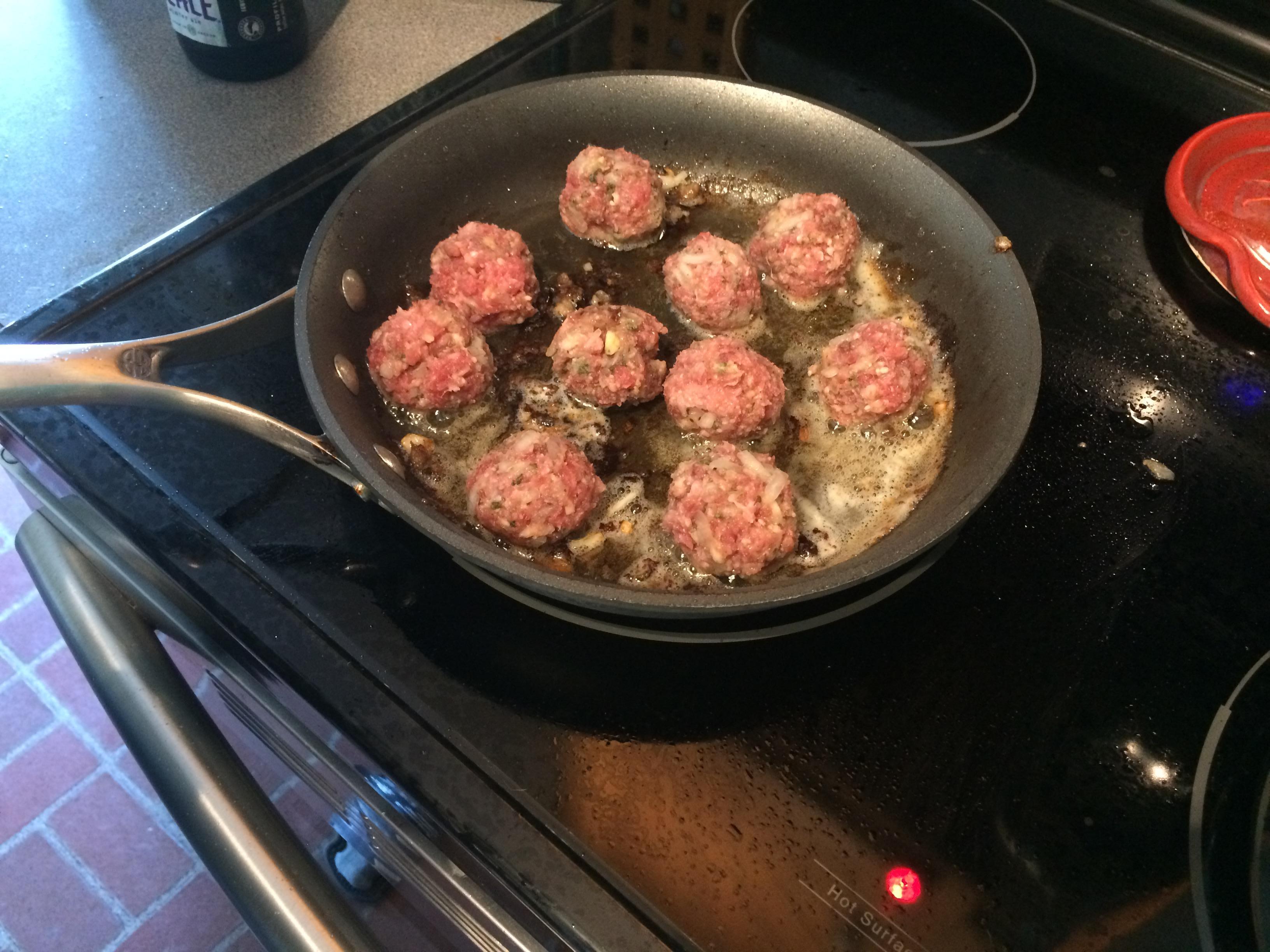 To keep things authentic, we watched the first three or four episodes of Frasier while browning meatballs. It’s better than I’d remembered.

We cheated again on our pasta, because I still don’t own a gnocchi striper. We used the fanciest fusilli we could find, and only cooked it two minutes this year, instead of almost five.

While we measured out the right amount of flour for dough, we had a bit of trouble rolling it out. 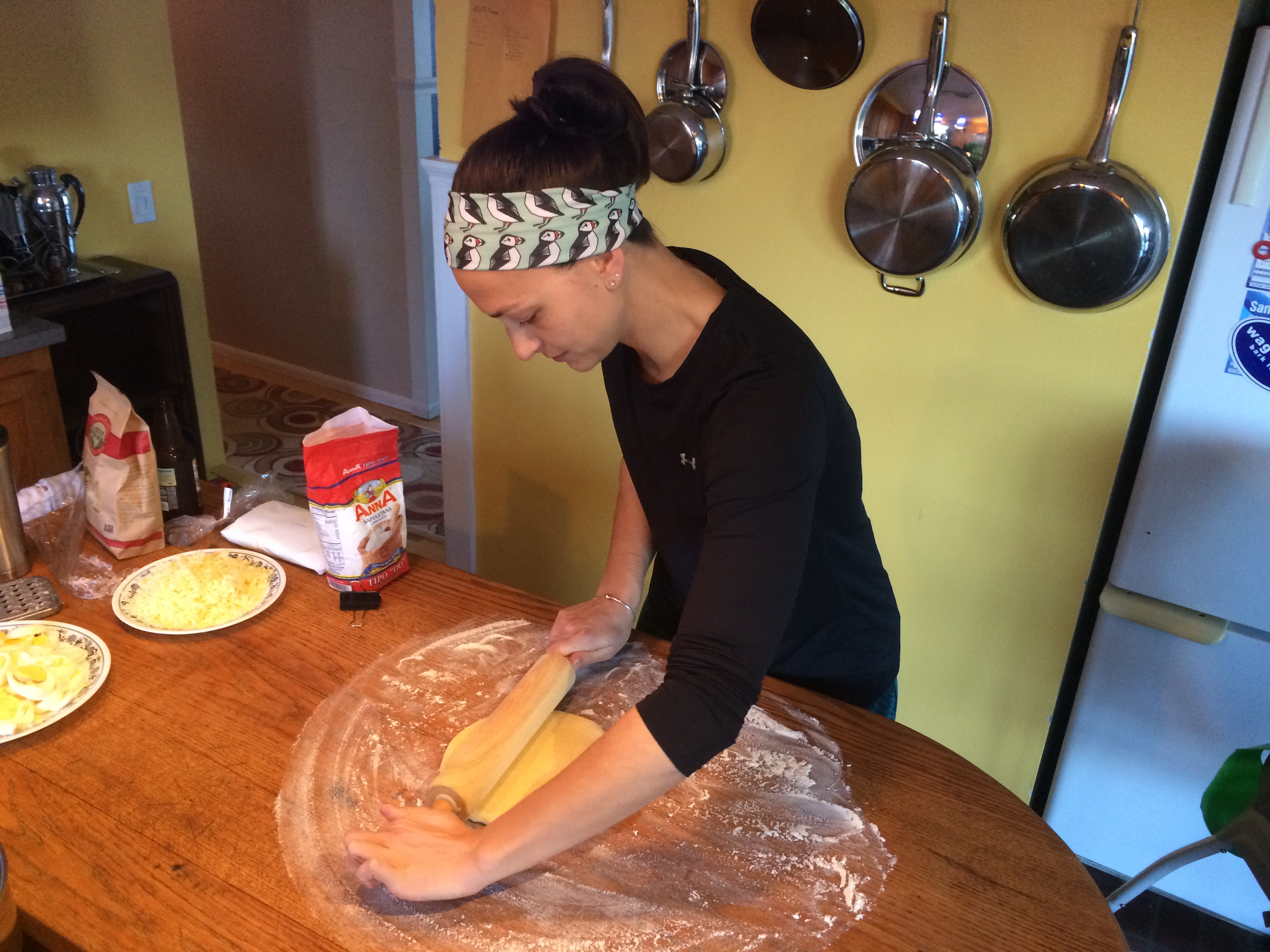 The first time we tried to move it into our pot we were about six inches short. After carefully spreading it out again, we both took turns rolling it with as much weight as we could. We really had to work hard to get it thin enough, and the handles on my rolling pin were scraping the dough. Next time, we’ll need a French style rolling pin which just has tapered sides.

We made some improvements to our layering process. Rather than halve the eggs, we cut half inch strips. And rather than the quarter inch rounds of Genoa salami, we used deli thin slices. But I still think we haven’t perfected our cheeses. I wish we’d added cheese in almost every layer, to hold things together a little better when serving.

This year we had more than twice as many dinner guests, so there was some added stress when unveiling:

This year’s timpano tasted a lot better. The better meatballs, the better sauce, and the fresh grated nutmeg at the end really made it a dish to remember. It took all 13 of us, but we finished off the entire thing, as well as some fresh bread our neighbors brought, and most of a piecaken: 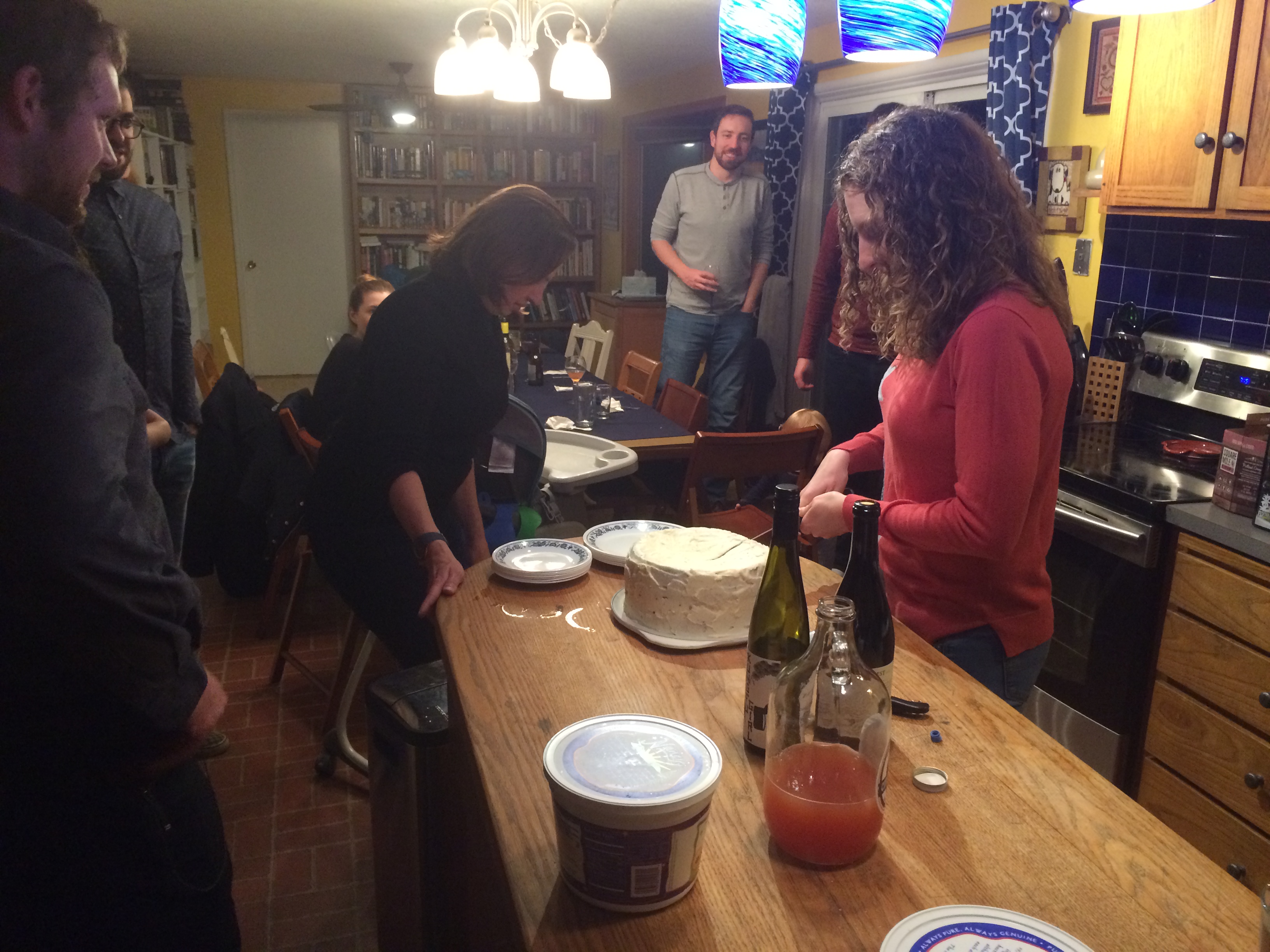 This ridiculous dish includes several pies baked into cakes, then stacked on top of each other and covered in butter cream frosting. I didn’t have high hopes, but it was actually really, really good. A perfect dessert to match the meal.

We’re taking suggestions for next year, even if they’re not timpano.

There’s also an album with additional images from this adventure.