A while back, I was playing around in Google Maps and stumbled upon this weird looking feature east of town:

That led to quite a bit of googling to figure out just what I was looking at. It turned out to be the largest monolith in Oregon, a gigantic chunk of rock towering 900 feet over the surrounding forests (check out the spectacular video I stumbled on during my search!). I had to go.

An opportunity came up months later, in November, when rain or snow was a risk any day. My good friend Mike (from some past adventures) agreed to join us, on what ended up being a perfect weekend.

We both knew this was going to be a casual trip, since there wasn’t much chance of us actually climbing Wolf Rock, which is a difficult scramble. Instead, we’d be content to just get out into the woods. We’d spend Saturday exploring the rock and see what the scramble route looked like and then spend Sunday climbing Carpenter Mountain.

Temperatures were supposed to go quite low at night, and with us likely camping at about 3000 feet up, there was no question it’d be under freezing. But once, while on the way for a 3 day backpacking adventure in north central Pennsylvania, my friend Paul had introduced me to a simple rule: every trip, you get one new piece of gear. That way, you won’t buy too much. And, if there’s some gear you really want, you need to get out into the woods — also a good thing. My new piece of gear was going to a Patagonia Nanopuff jacket. I ended up only taking it off only while hiking uphill, and I’m not sure if I could have made it through the trip without it. I don’t know what took me so long to purchase a puffy. Probably a lack of time in the woods.

We struggled a little bit on the drive out, worrying if we were going to have trouble finding the rock. We shouldn’t have. 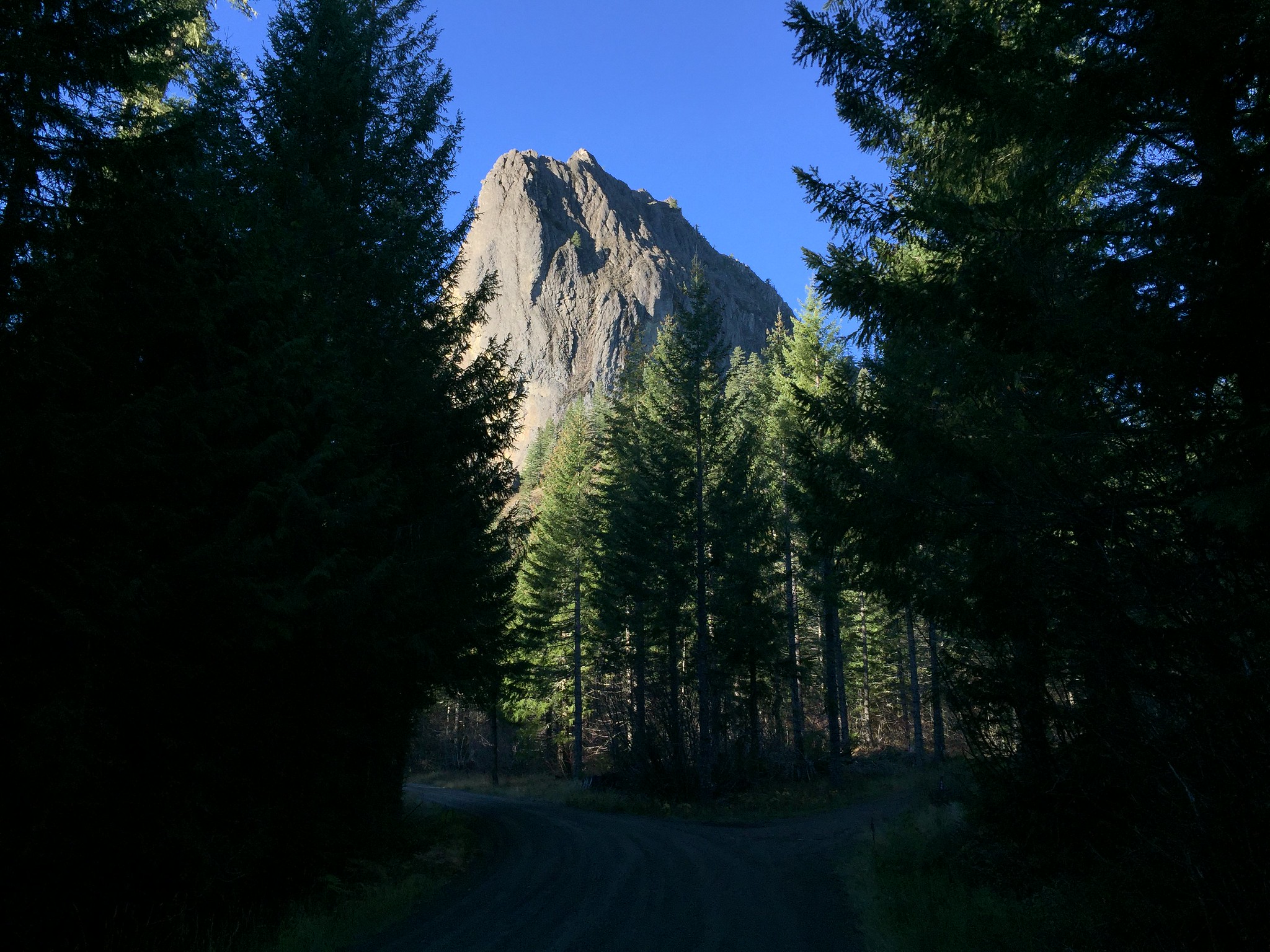 I had hoped to have the entire rock to ourselves, but there was a pickup already there. We parked right behind it and headed up. The people in that pickup ended up being one of the best parts of this trip. 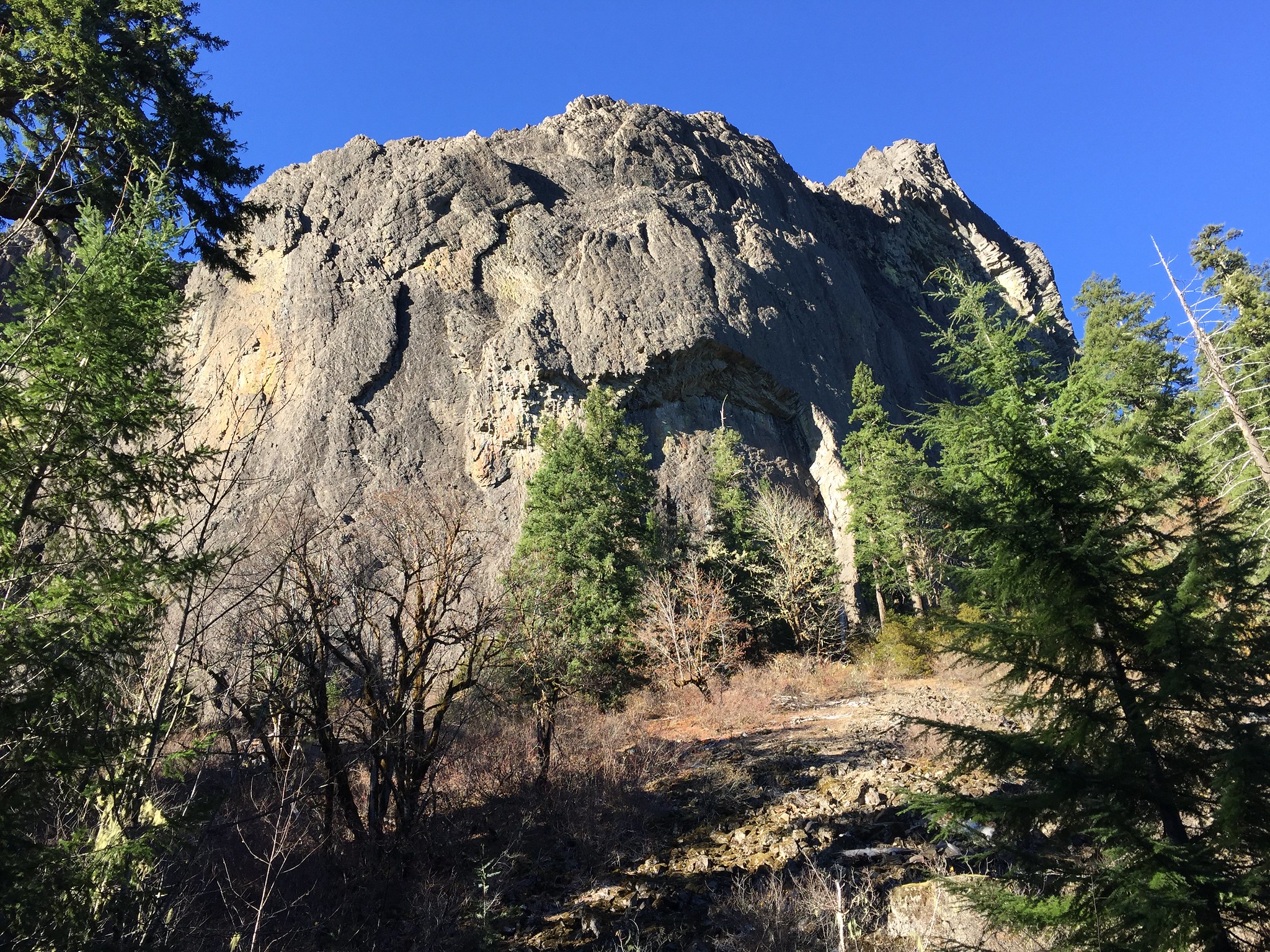 We followed a very faint trail up to a sheer rock face, then came around a corner to find the owners of that truck, climbing on the face. After we all got to talking, they gave us some clues on how to find the trail for the scramble. Those directions involved returning to the road, going down the road a hundred yards or so, then heading back toward the rock at a culvert, and staying to the left of a big amphitheater like thing. We thanked them for their time, and they said to just holler real loud if we got into trouble.

We followed their directions as best we could before turning up another faint trail. Sure enough, we soon found the amphitheater. 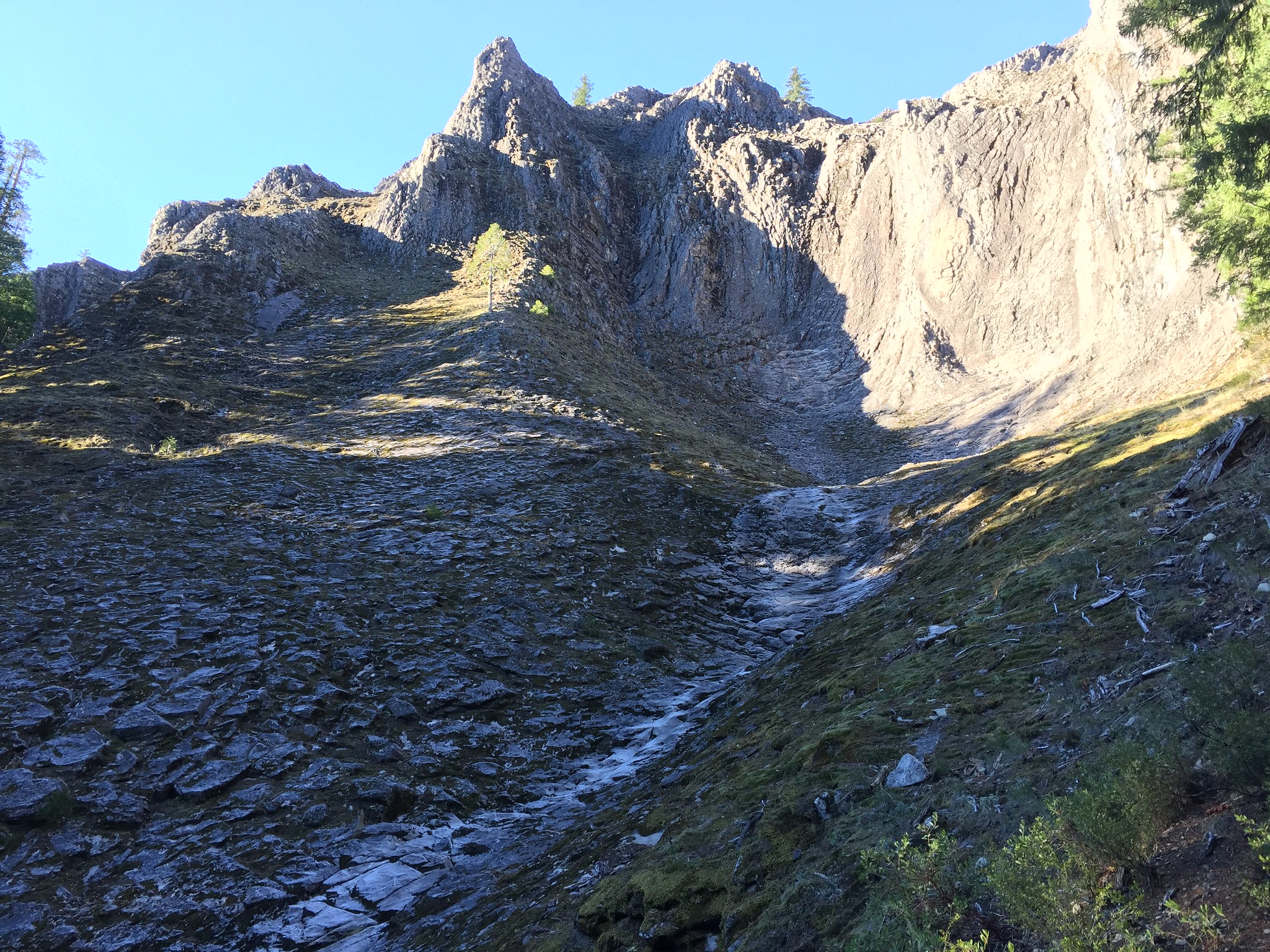 Our problem was that there was no way to stay left, as that bright line through the center of the picture was slick looking rock with a steep ravine at the bottom. But the trail did stay to the right. We reasoned that maybe that couple had meant you had to go left at the amphitheater. We hiked up, thinking there might be some sort of shelf you could cut across. 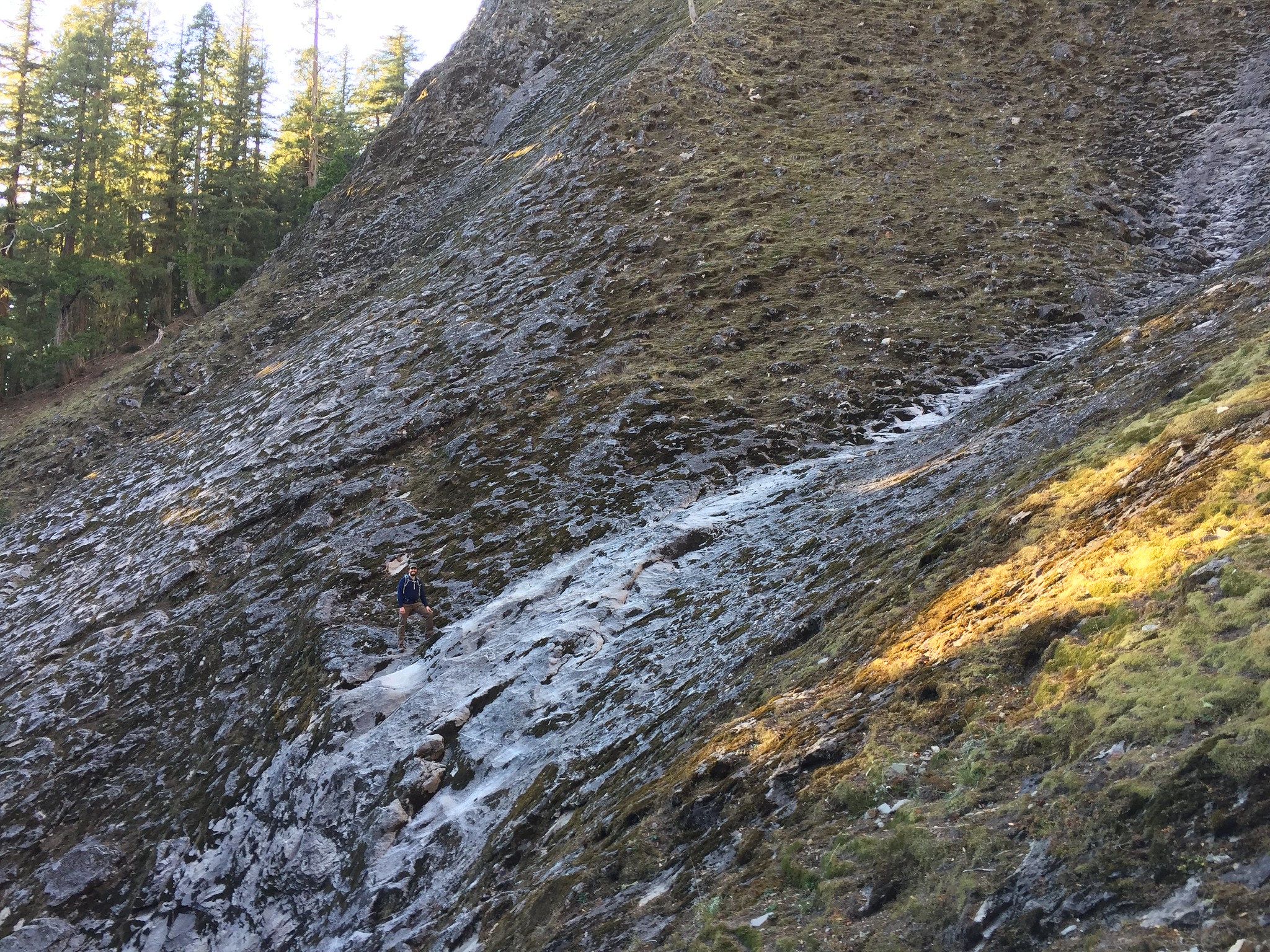 We ran into one of those classic mountain problems where you’re too close to the terrain, so you can’t where your line is going, and you end up in completely the wrong direction. We moved through some sketchy rock trying to find our way over, but only found moss and slick stone. Since it was going to be dark soon, so we opted to go back the way we came and maybe try again in the morning. Here’s picture that better shows the terrain we were on. 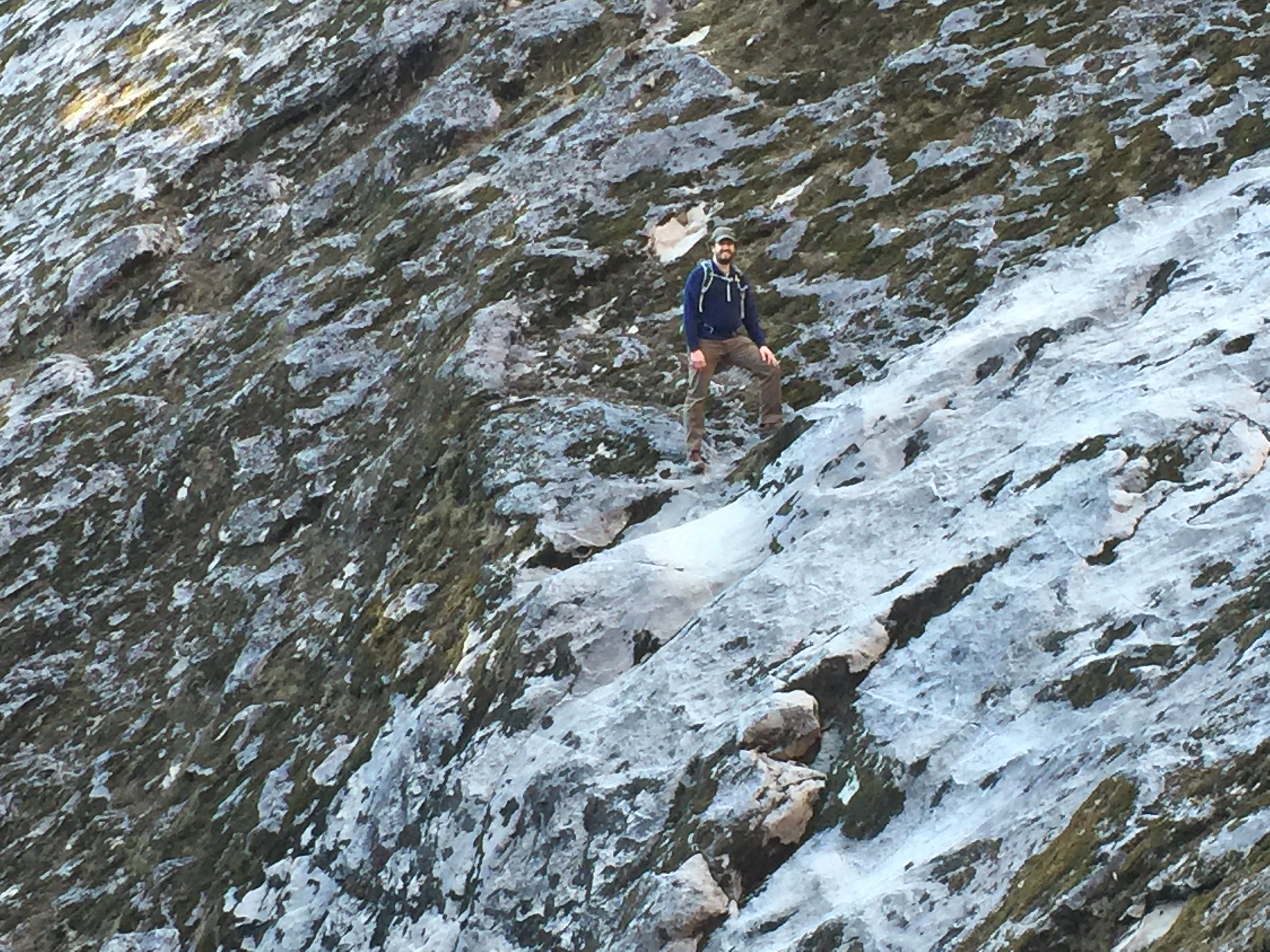 But on our way out we find the climbing couple walking up to meet us. They’d been headed out when they realized: there are two culverts. We’d turned at the wrong one. They were kind enough to guide us right to the start of the scramble, so we could find it if we returned in the morning. Then we followed them back to the vehicles, having all sorts of great conversation. You meet good people in the woods.

Right as they were about to take off for home, they asked if we’d found a campsite. We’d actually found many on the way in, and thought we’d just return to the first one we came across driving back toward town. But they offered to show us their secret site (on the condition we never tell where it is, of course), and guided us there in their truck. As the site was hundreds of yards off the main road, we’d have never found it without them. It was possibly the best campsite I’d ever had. 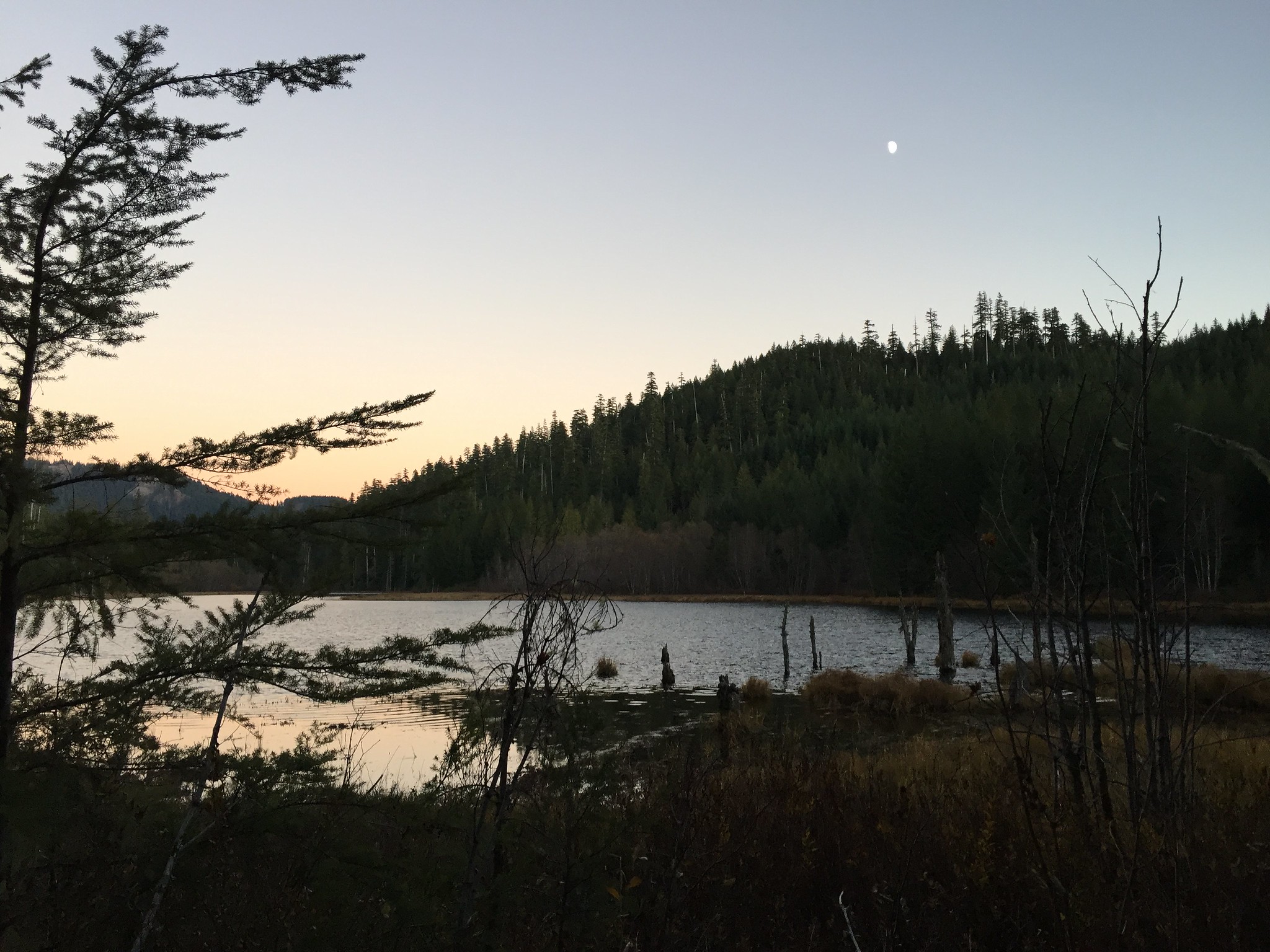 The site also had the best fire pit I’d ever seen, complete with a little spot for setting a pot over the fire. 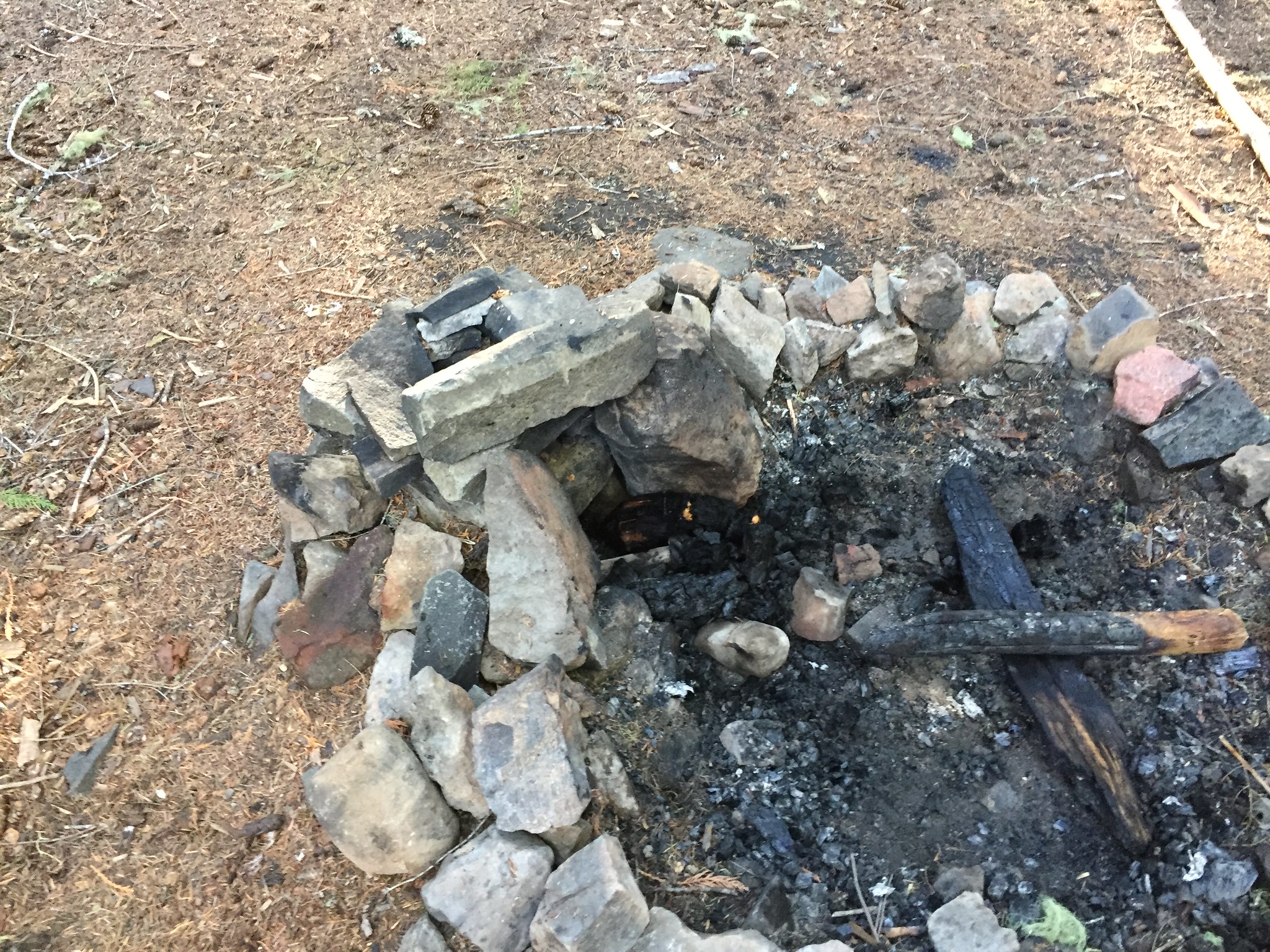 With dark on us by five, and no one for miles in any direction, we had plenty of time to make a fire and catch up. We made dinner, and sat by the fire on camp chairs, catching up.

As expected, it was a cold night. I slept in a 45 degree down bag, with a 30 degree synthetic bag on me as a blanket, on an air pad on a foam pad, wearing polypropylene tights and a wool/polypropylene blend long sleeve, my winter hat, my wool socks, and with a heated water bottle by my feet, and I still felt cold all night.

In the morning, we considered trying to scramble the rock again, but figured we wouldn’t have the time. Instead, we drove nearly twenty miles to the Carpenter Mountain Lookout — located just a mile from the rock on a map.

The hike was brief, through some nice fields, and the lookout was unoccupied. The views were perfect, with great views of Jefferson and the Sisters.

We could also look down at the rock. 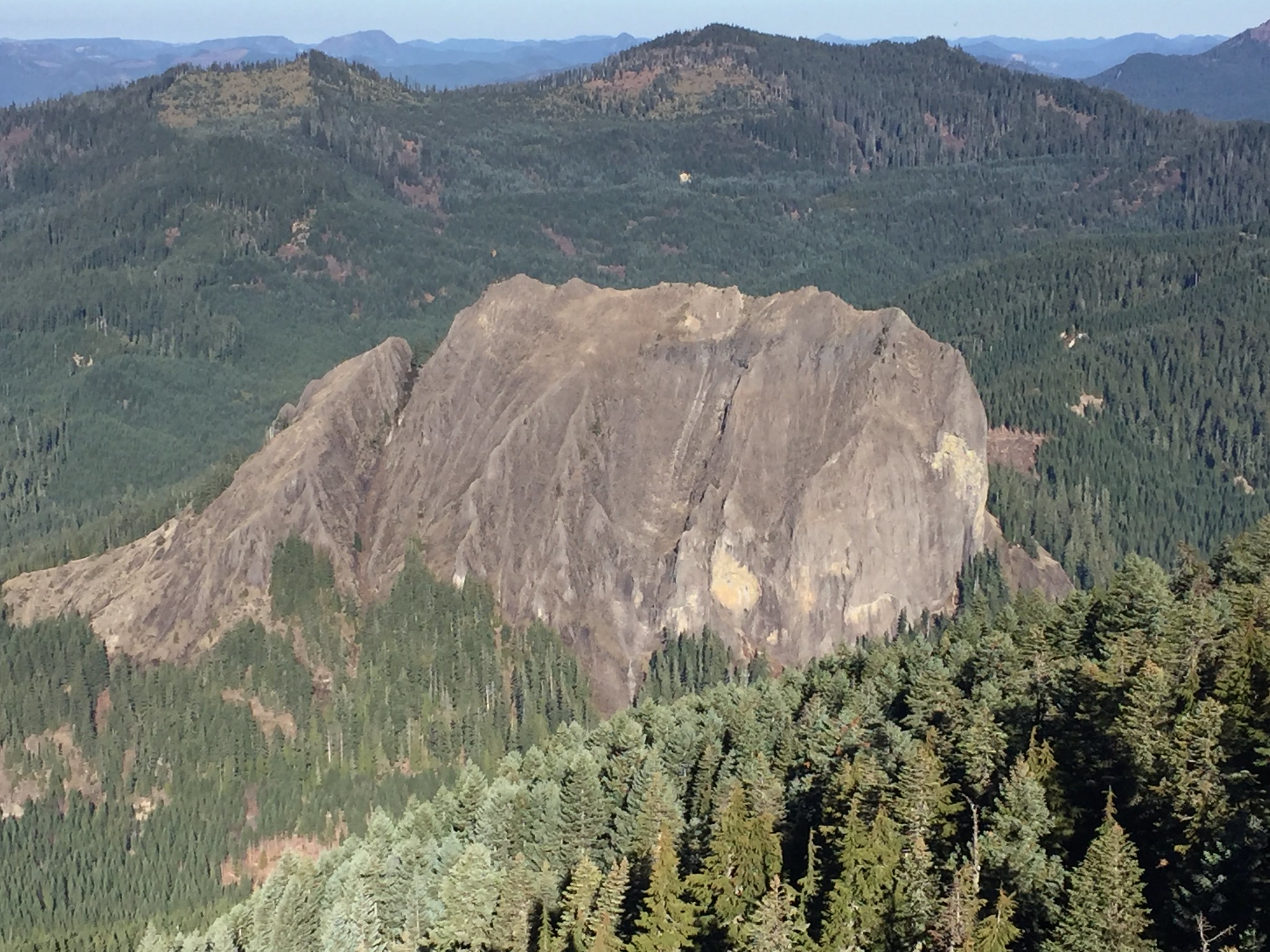 We needed to be back in Eugene by one, and we cut it close. In the end, a great trip, if short. We’re both hoping to go back soon.