One of my resolutions after my last trip was to get out into the woods a bit more. Almost immediately after that trip, Mike and I started an email conversation to find a location for a spring trip. But some unexpected good weather in late January made us overconfident, and we found a weekend to head out in the middle of February.

After a few dozen emails, we had a plan. To the northwest of Detroit, Oregon there’s a bit of forest with the Phantom Natural Bridge, Natural Arch, and the Rocky Top Lookout. We’d meet for breakfast in Mill City, OR, then drive to a dispersed campsite, and do a couple long hikes on both Saturday and Sunday.

But as the weekend approached, the weather got worse. Suddenly the forecast was calling for several feet of snow in the mountains and inches of rain in the valley. Everywhere, from the Olympics to the Redwoods, looked in for a very damp weekend.

Several feet of snow can be great conditions for certain activities outdoors, but unfortunately they’re the ones I don’t have the gear for. So I searched for a hardshell jacket to keep dry in, whether we were snowshoeing, mountain climbing, or just hiking in the rain. By chance, Patagonia was running a half off sale,and a new Pluma Jacket was soon on its way. I also had to replace my boots, which I’d discovered on the last trip were falling apart. While I’d ordered a pair of Merrell Trail Glove 4’s a while earlier, they weren’t going to help if we hit snow. I purchased the only waterproof minimalist boots at REI, just a few days before the trip: Altra Long Peak 4 RSM’s.

Of course, shoes and a jacket weren’t going to be enough for an actual winter trip. I only have a 3 season tent, a lightweight air pad, and a 30 degree bag. With the weekend rapidly approaching, and with our campsite probably well above the snow line, we started to think our Detroit trip wasn’t going to work out. After another twenty emails, we came up with a new plan. Rather than try to camp, we’d meet in Salem, leave a car at the REI there, and then head out to do Niagara and Pheasant Creek Falls, and with enough time, then do Drift Creek Falls, before returning to Salem for dinner and the drive home. It’d be a short trip, but one we could do in any amount of rain.

The morning of, I loaded the car and headed north under clear skies. While Saturday had been damp, and we’d anticipated being wet all day, the weather had taken another unexpected turn and the day turned out to be gorgeous.

The parking area at the Niagara Falls trailhead was fairly small, but had plenty of space. The trailhead starts at the left side of the parking area, and can be a little hard to see. Or, at least, that’s how the two cars after us felt, who had both started down the road, thinking it was a trail. The hike was short, but quiet.

We also grabbed our only selfie of the trip. 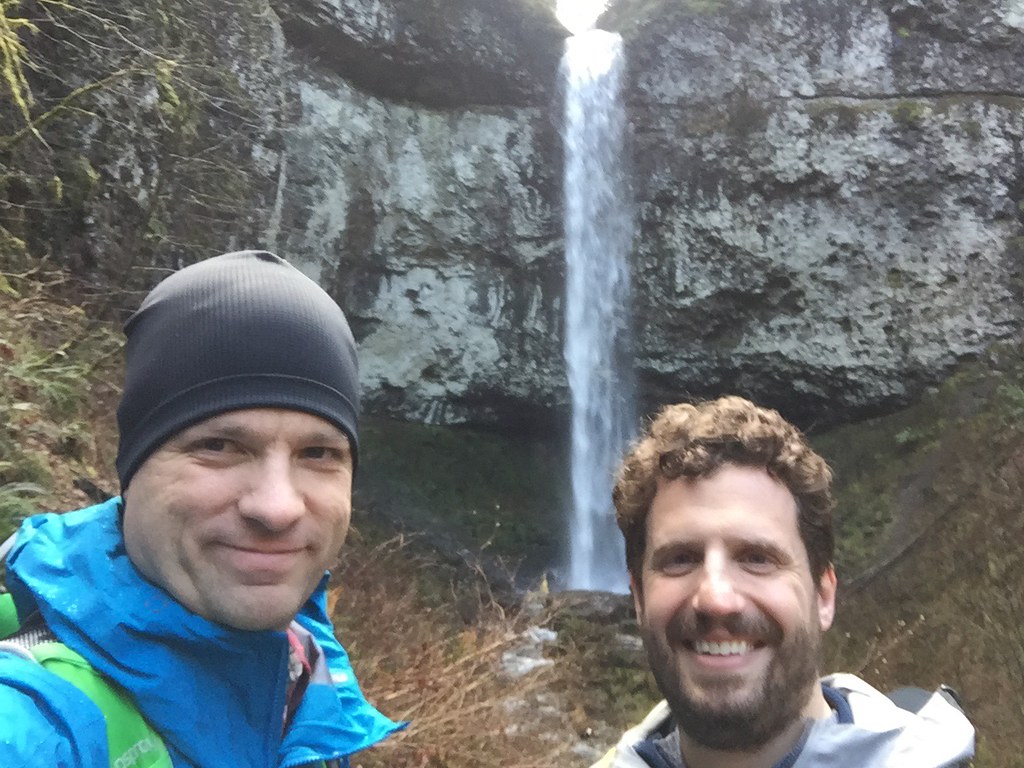 Back at the car, we first went west to US-101, then south looking for food. Although the market in Neskowin sounded promising, it was a little off the highway and we wound up at the Otis Pizzeria. Their recommendations were solid, and the prices fair for food on the coast.

The road to Drift Creek Falls was long and twisting, but easy enough to navigate. The parking area was very full, even on a day originally projected to have terrible weather, with cars parked on the side of the road. This parking area, being much more developed, required a fee. Since neither of us had thought to grab a forest pass, we planned to simply pay the requisite $5 when we got there. However, it’d been such a busy day that there were no envelopes left, leaving me to film myself putting the $5 into the receptacle, just to have some evidence to show that we had paid if ticketed.

The highlight of the trip was the bridge, 100’ above the gorge below. 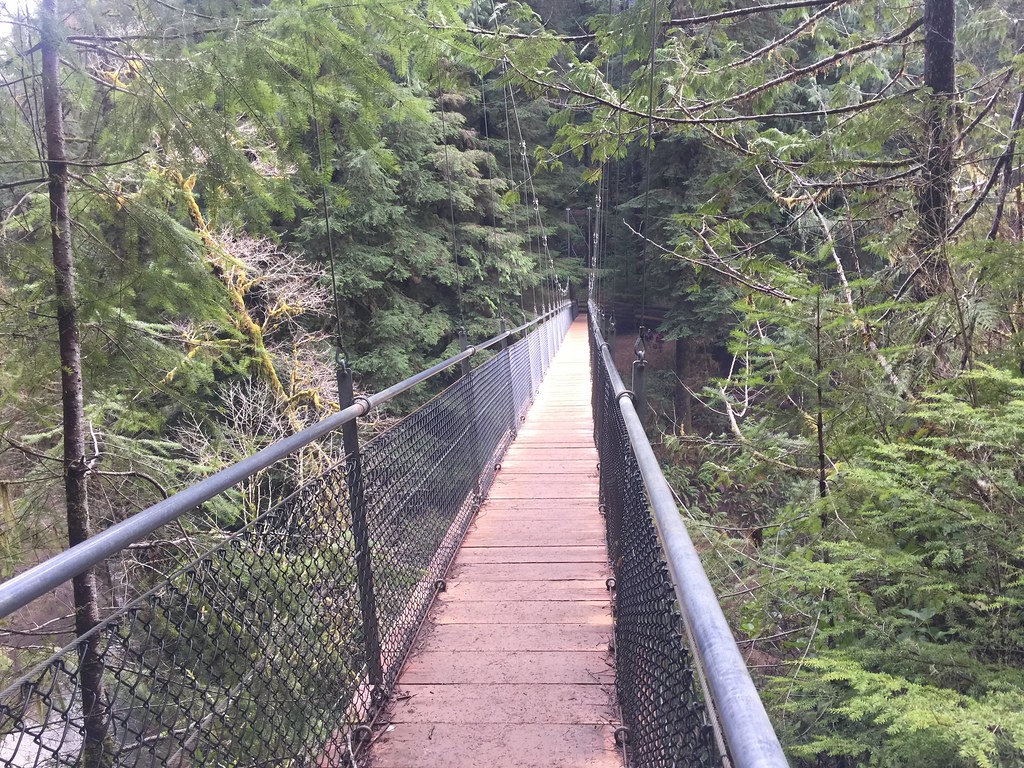 It swayed a little bit when on it, but a lot less than the one in Frederick used to.

Down at the bottom of the gorge was a great view of an 85’ waterfall under the bridge. 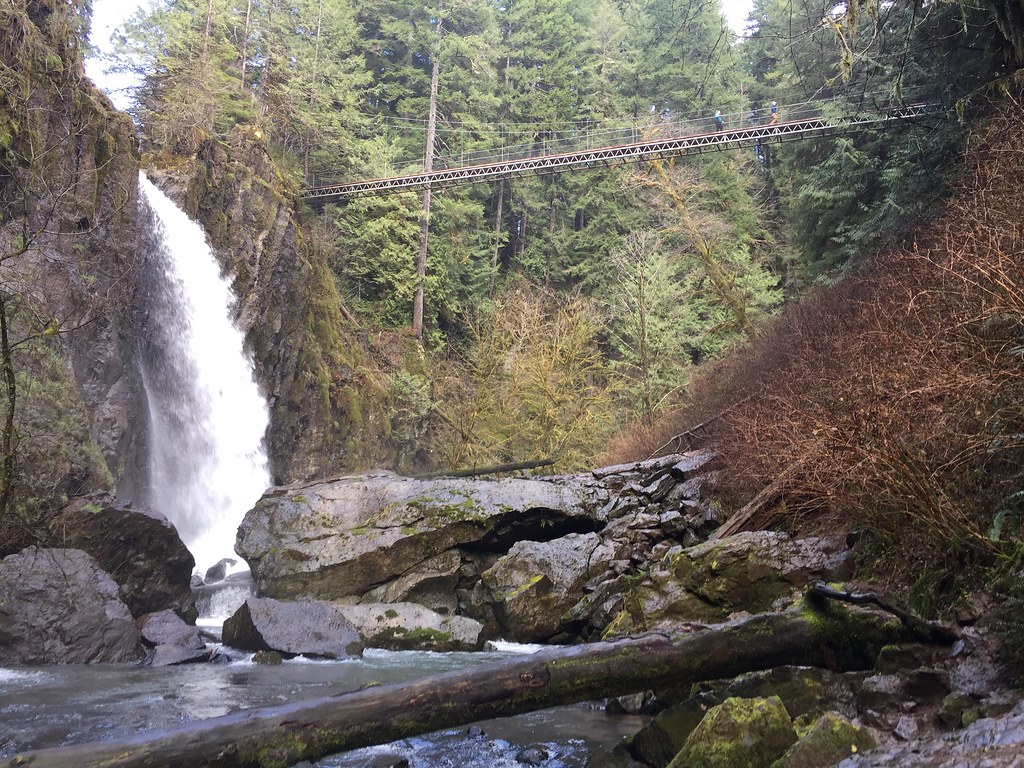 While not a long hike, it was certainly a nice one, and one I’d be glad to do again with the family. We returned to Salem, too late to stop at the REI, but with plenty of time for a dinner and a desert at Gustav’s Bargarden. A nice trip, if a bit much time in the car. Also a nice excuse to spend more time with the DSLR that had given me so much trouble on the previous adventure. I’m much happier with the photos from this trip (the last two in this post were with the DSLR - the other two were on my iPhone, which is definitely feeling dated).