Two years earlier, we’d made an attempt on Diamond Peak, via the Rockpile Trailhead, and had to give up short of the false summit, due to a combination of too much early season snow on the ground and my boots, which were not as waterproof as I’d hoped. With a weekend free, it was time to try and grab the peak.

While in the past we’d limited ourselves to overnighters, this time we’d try two nights to get an earlier start. We headed out early enough on a Thursday to have no problems getting a walk-up site at Sacandaga, just as few sites down from our previous one. We arrived early, and spent a really delightful afternoon making conversation with the botanists across the way, exploring some nearby trails, and enjoying an orzo jambalaya cooked over the campfire. We were both in bed before 9, with me asleep almost immediately and him reading for a while.

We left early, since we’d previously had trouble with daylight. One difficulty was in determining what to bring. While previously, my wet boots left me cold, on this trip temperatures during the day in the valley were forecast well above 100. But we were still early enough in the season that we were worried about encountering the previous winter’s snow as we got higher. I left with a very full daypack, with microspikes and an ice axe, but also with nearly 5 liters of water, a hat with neck shade, and sun sleeves.

We arrived at the trailhead not too long after dawn, and hoped to spend a minute or two putting boots on and generally getting things squared away. But as soon as we opened the door mosquitoes were everywhere. Fortunately, I’d brought mosquito netting, after remembering some friends who’d had a bad June trip around Broken Top. Mike, unfortunately for him, had brought nothing.

It’s somewhere between 3 and 4 miles to get from the trailhead to the treeline. We never stopped, even though we desperately wanted to remove layers, even though we wanted to drink, to eat, and to admire the view. So long as we moved at a brisk walk, the mosquitoes were manageable. If we slowed at all, even to a comfortable pace, they were all over us. Looking at Mike ahead of me, I can remember wondering where he’d found the mud to make black spots all over his pants. They were mosquitoes. Several times snow covered the trail for hundreds of yards at a time, making it difficult to know where to go. We simply pressed on in what we hoped was the right direction, checking on a phone on the move to steer us toward the trail once in a while.

Once we were above the tree line, a breeze returned, and things got a lot better. 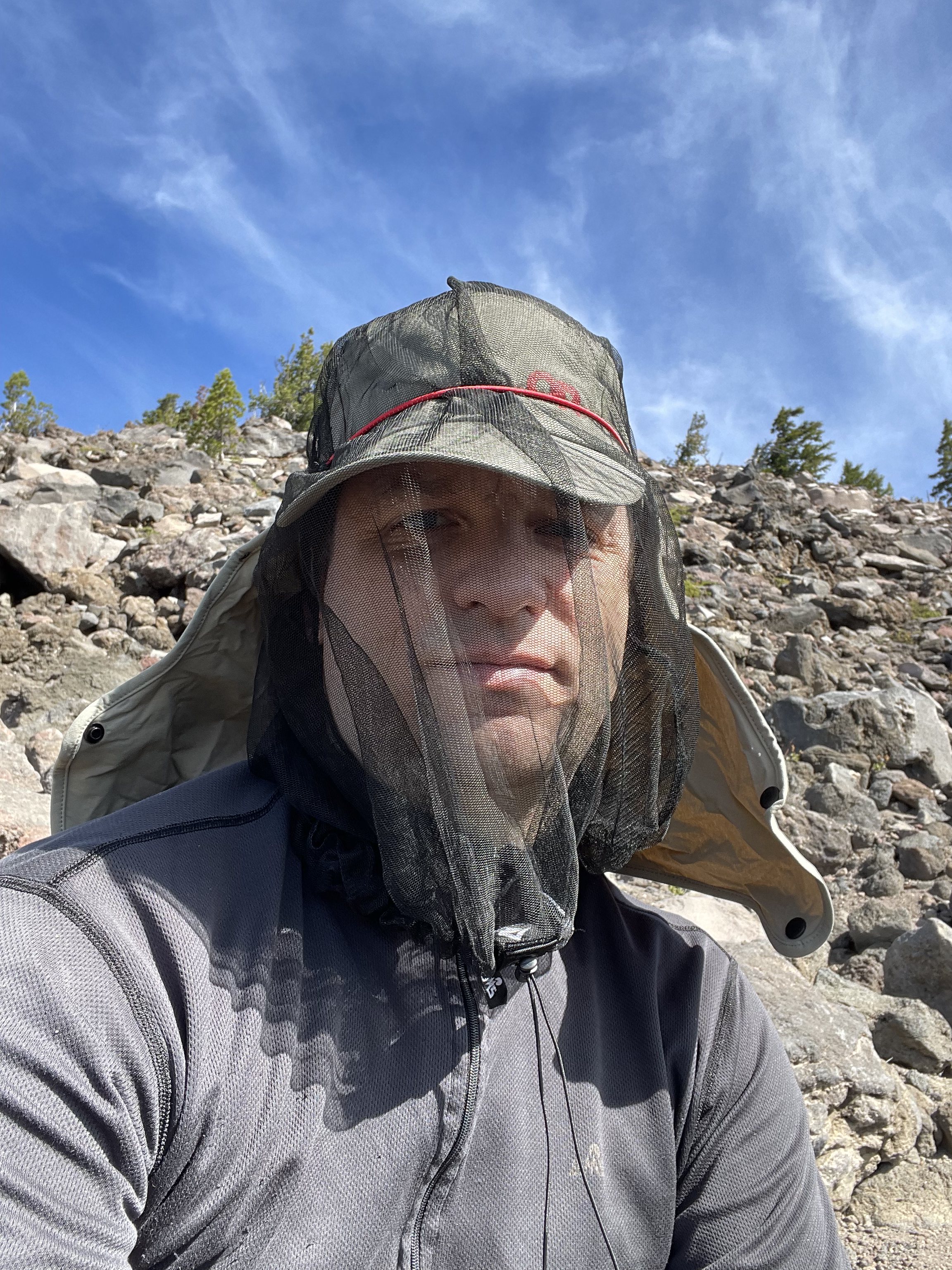 The climb to the false summit was uneventful, with the trail easy to find and completely lacking snow. We stopped there, deposited some gear, and started the traverse to the summit. 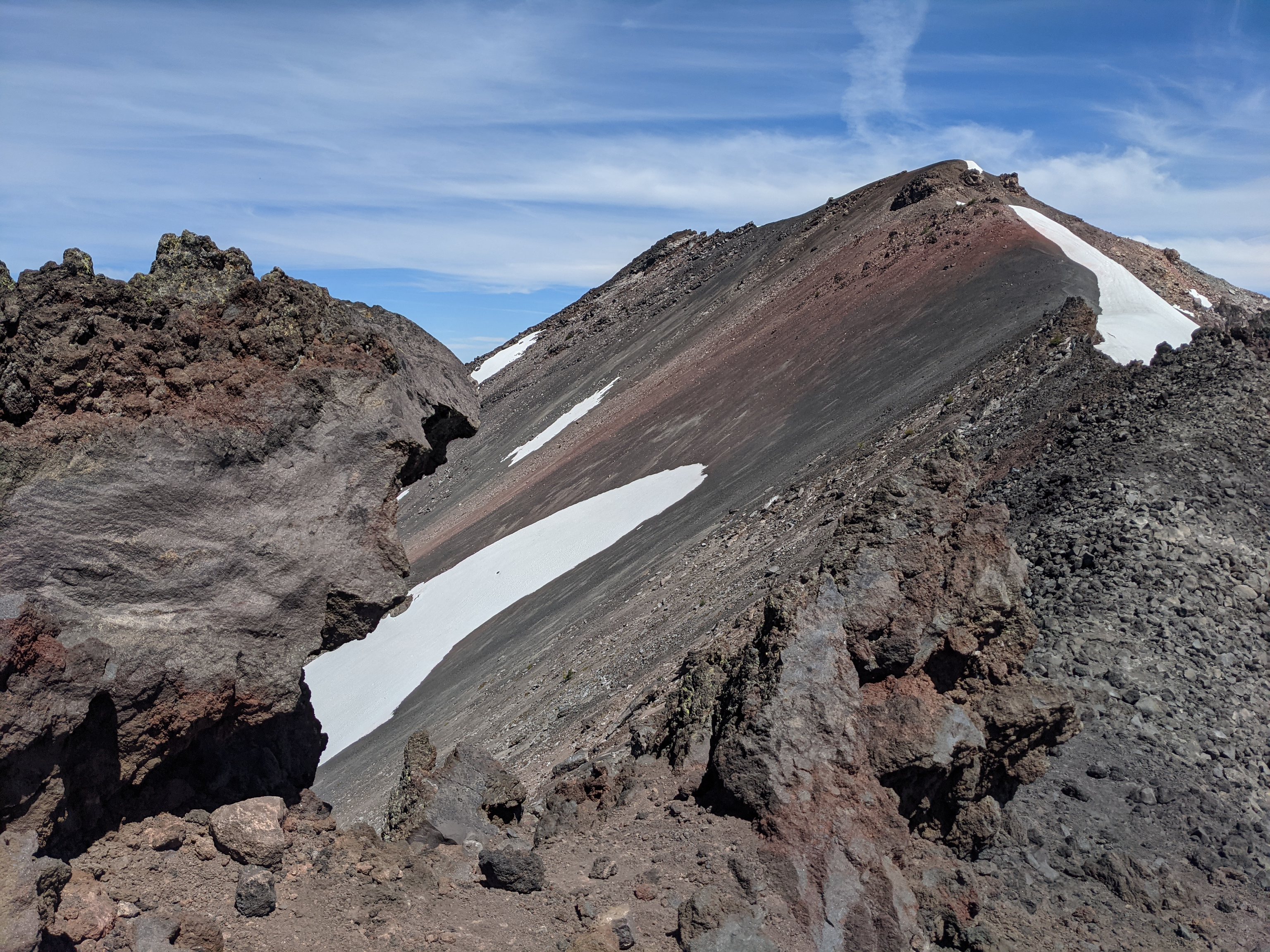 While it was difficult to capture in a photo, the traverse featured a number of very large rocks, with the trail difficult to spot. Climbing over them felt exposed, but wasn’t a serious issue. 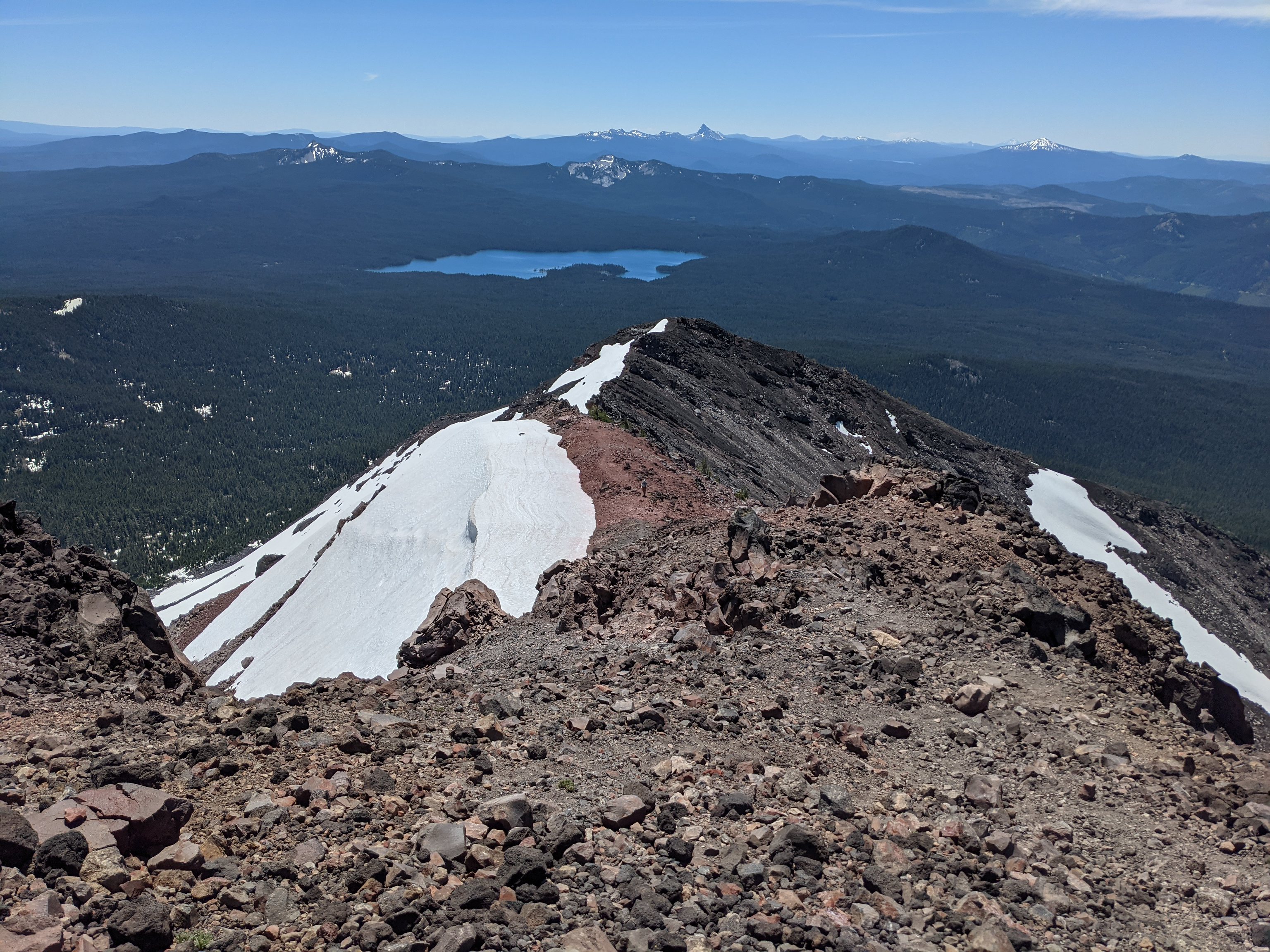 I was hurting, so Mike summited a good bit before me. Views at the top were fantastic, and we even had enough service to get a text to Jillian that we’d made it. 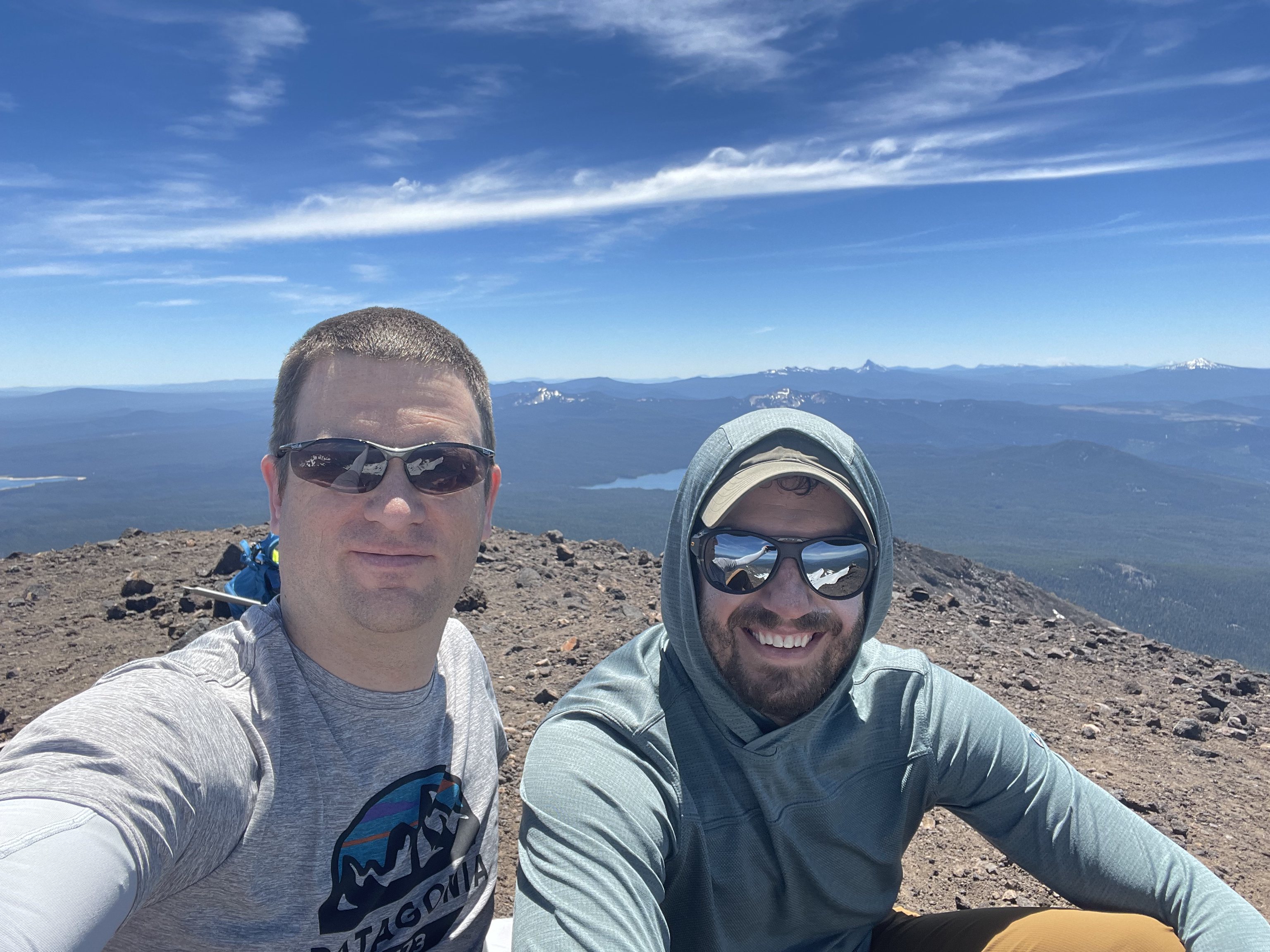 On the way down, we tried going around some of those rocks. 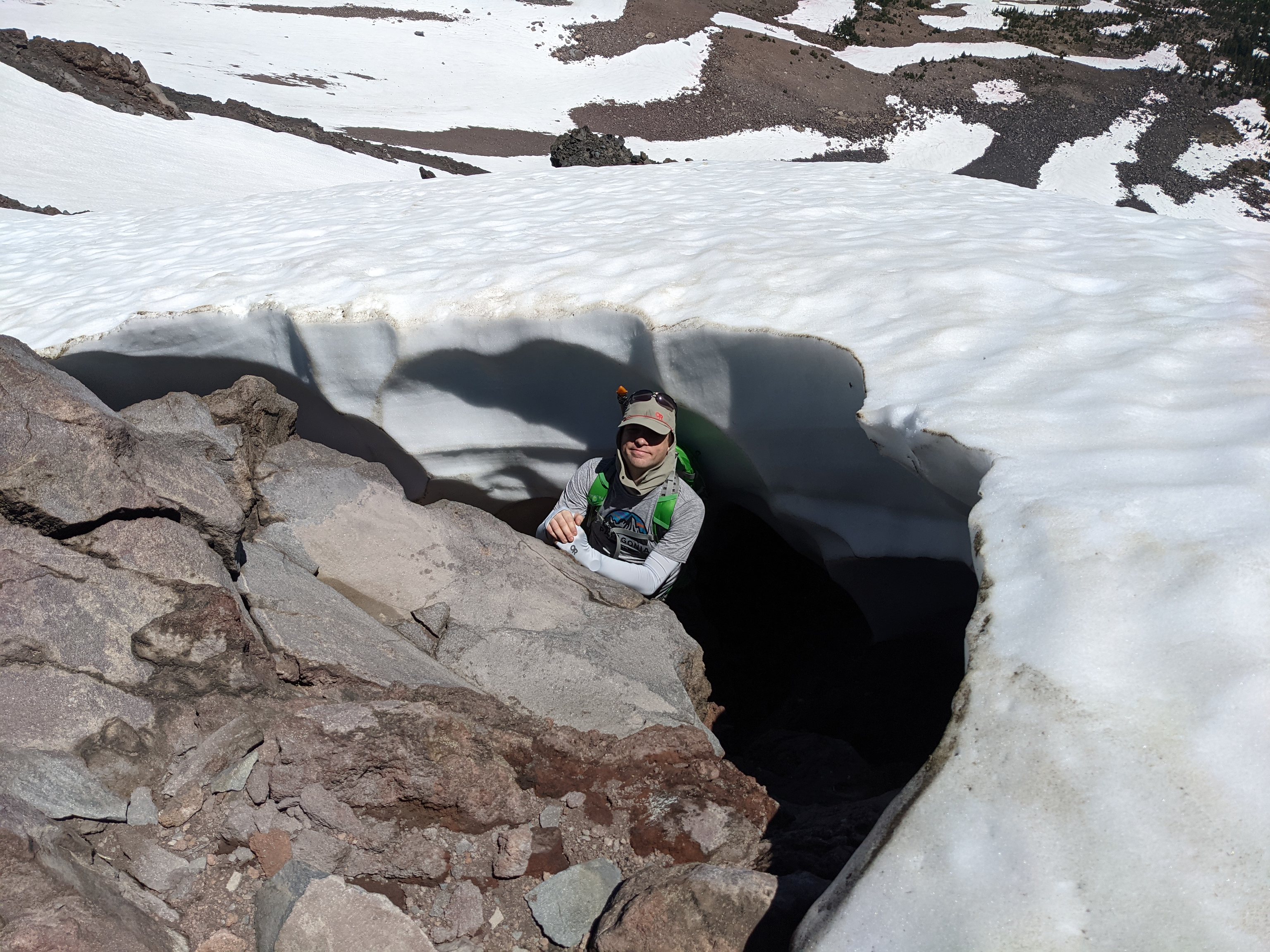 The snow had formed some pretty awesome formations, but I’m not sure how I’d have felt climbing on that much snow supported by those columns. 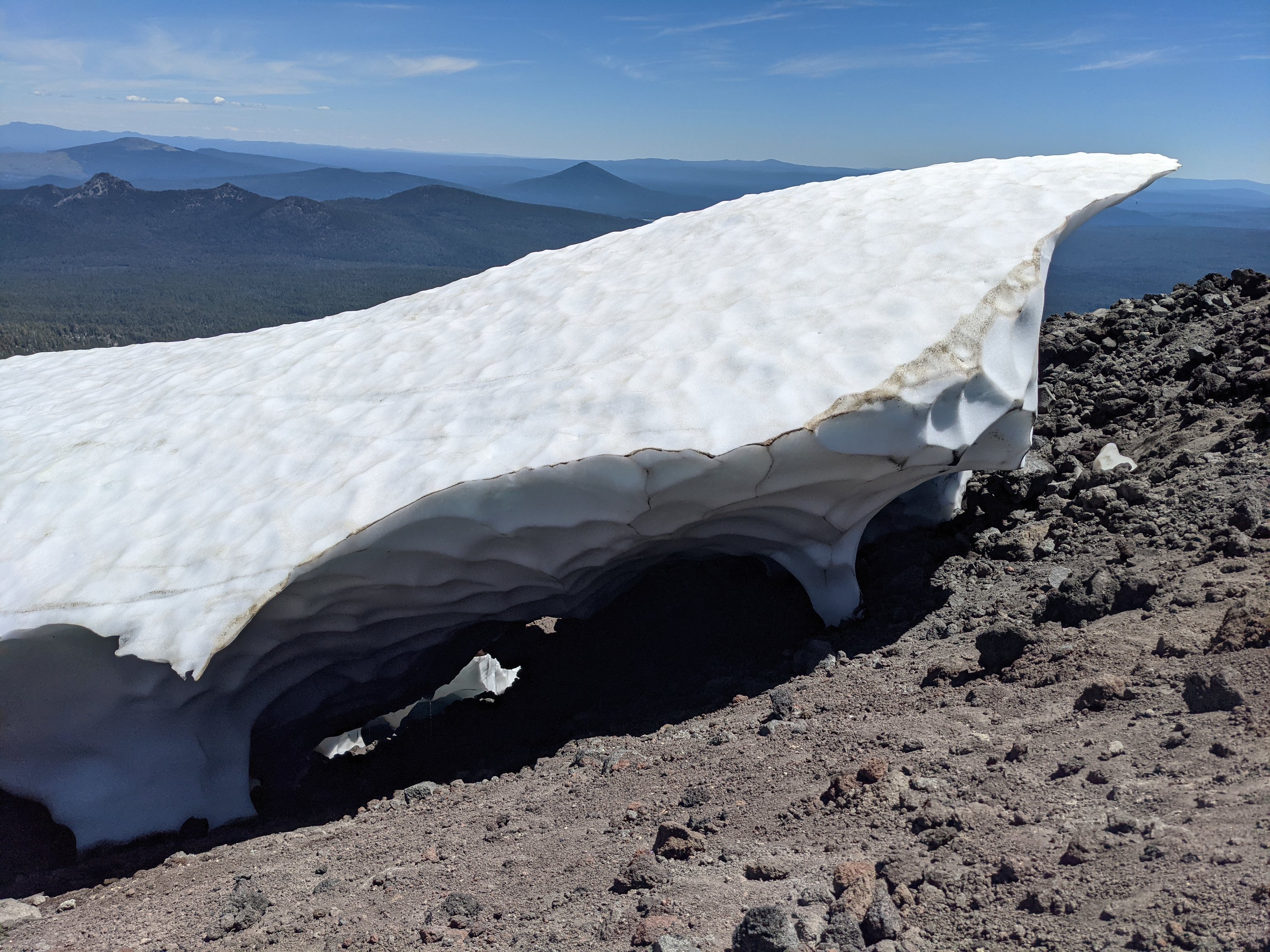 After a brief lunch at the false summit, it was back down the mountain. As we neared the trees, we knew what was coming. While on my way out, I’d worn a Techwick long-sleeve, on the way back, I only had on the white sun sleeves visible in that picture. And by now, I was hurting a lot more, due to a chafing issue that made every step hurt.

Me hurting was problematic. Mike couldn’t stop moving, or he’d be swarmed with mosquitoes, while I couldn’t move very fast at all. We had an unspoken compromise: he’d move forward, then either wait if he found a stiff breeze, or walk laps until I caught up.

With 2 miles to go, we finally decided to split up. He’d go as fast as he could, try to get safe in the car, and if I wasn’t there in another 30 minutes he’d come back looking for me.

Those 2 miles are some of the hardest hiking I’ve ever done. I’d finally realized the mosquitoes were biting right through my sun sleeves, and I couldn’t swat them away fast enough, nor put on enough clothing to keep them away without overheating.

As we neared the trailhead, each of us independently ran into a couple hiking in. Mike’s conversation was very brief, in his rush to get back to the car. Mine was a little longer, and I had time to realize they had no mosquito gear, he wasn’t even wearing long pants, and she looked absolutely heartbroken when I said we had trouble with mosquitoes right up to the tree line. I wish the best for that couple: they’d planned to spend the night at the somewhat swampy pond on the other side of the ridge.

After leaving them, I left the trail to find Mike pulling up (he’d decided to move the car closer to the trailhead). I’m not even sure the car stopped moving as I got in it, and we returned to Sacandaga, with me swatting mosquitoes in the car the whole way.

My arms were a little worse for wear. 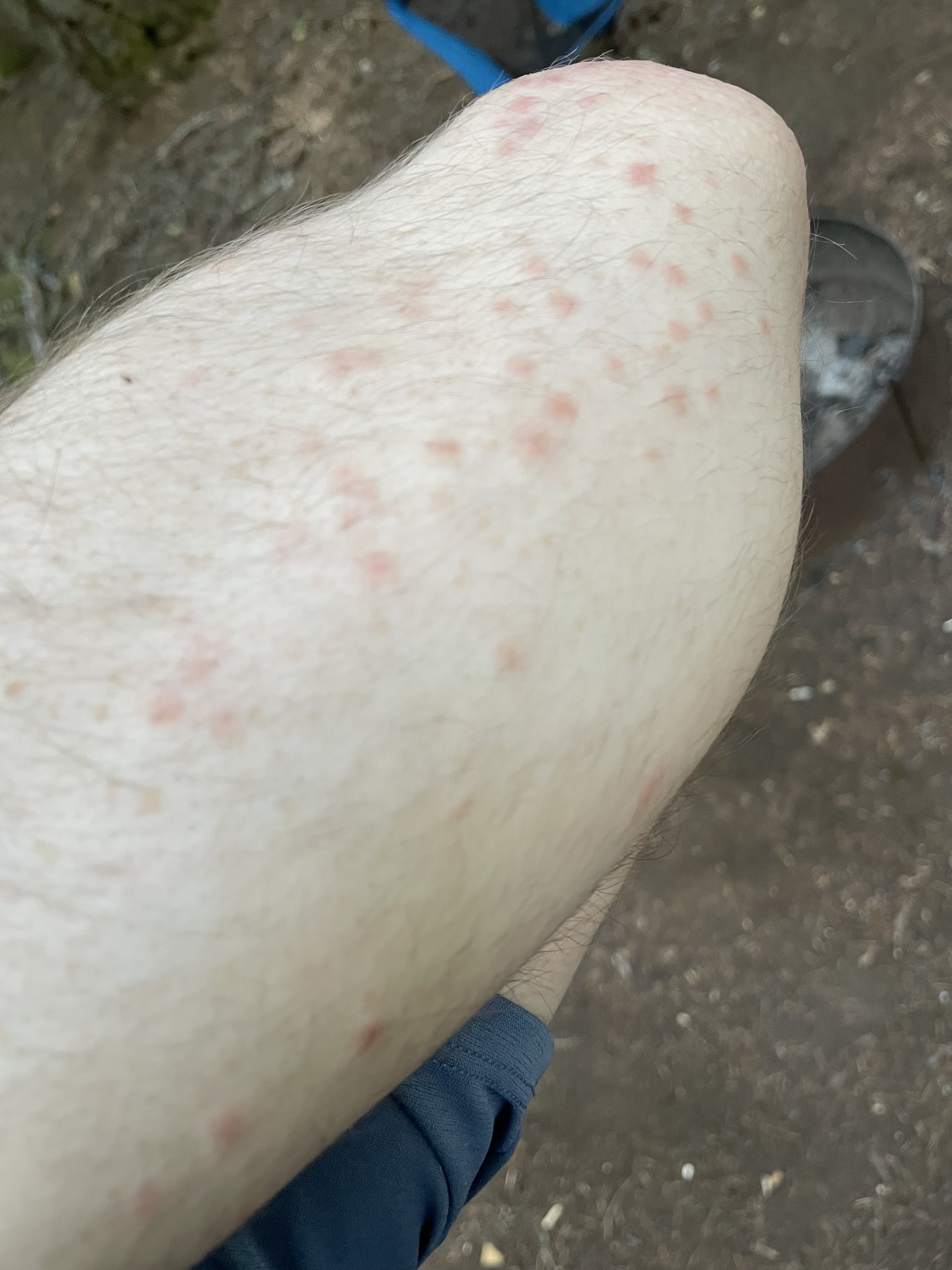 We spent another night. It started out ok, but by midway through the night it took all the mental energy I had to focus on not scratching.

By the time I got home, bites had turned into welts. 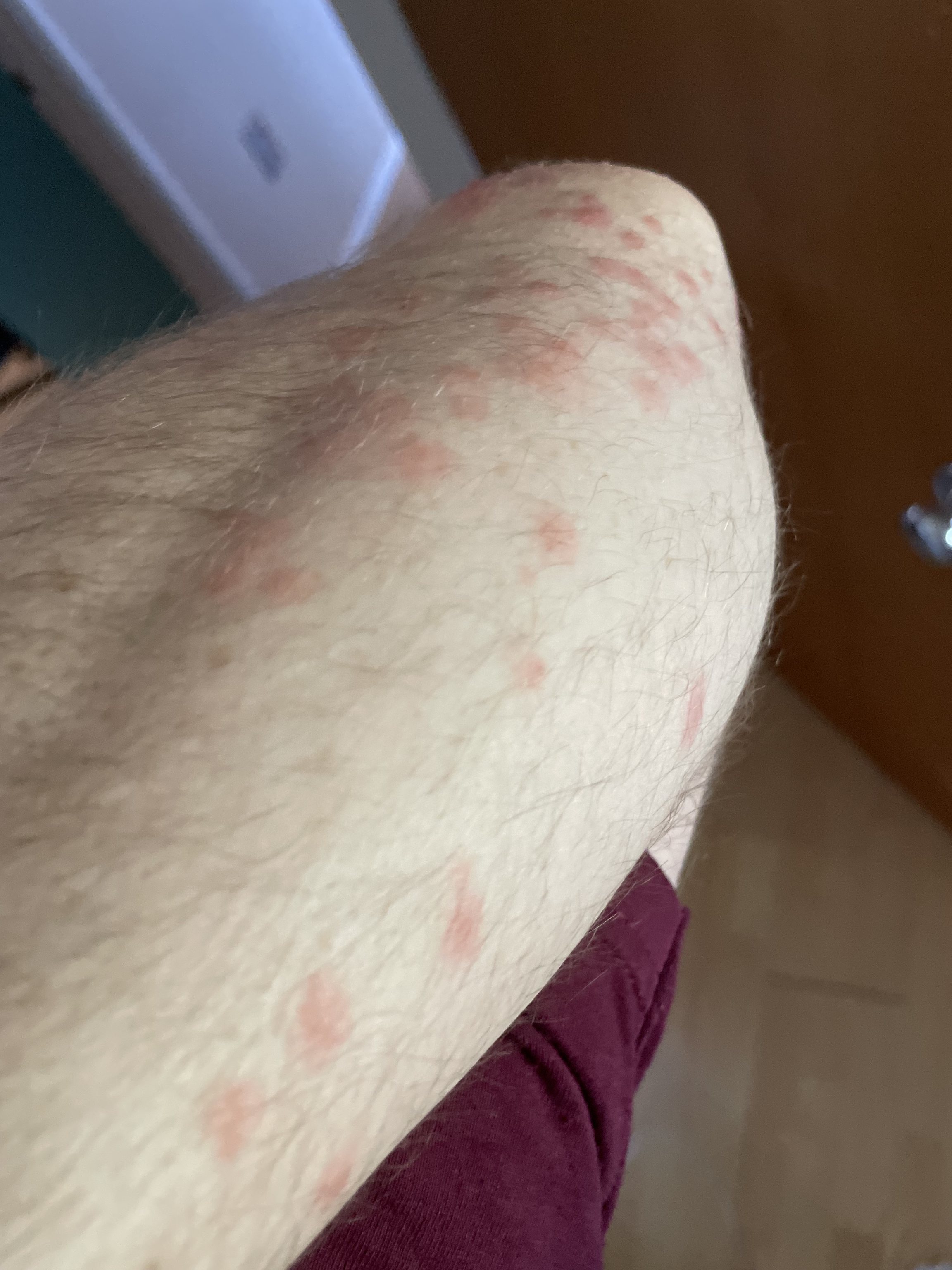 My arms ended up taking nearly a month to heal, and for several days I really couldn’t do much but smear anti-itch lotion on them and focus on not scratching.

Lessons learned: keep some lotion with the camping stuff, just in case. And next time, use a full body mosquito net.