Rather than day trip, for this one I started by driving out to Cold Springs Campground on a Friday afternoon. The way there was remarkably clear, despite some considerably growth in the Cedar Creek fire since my trip a few weeks earlier. I stopped at Dee Wright on the way there. This trip’s summit would be the tall, snowy covered peak in the background. 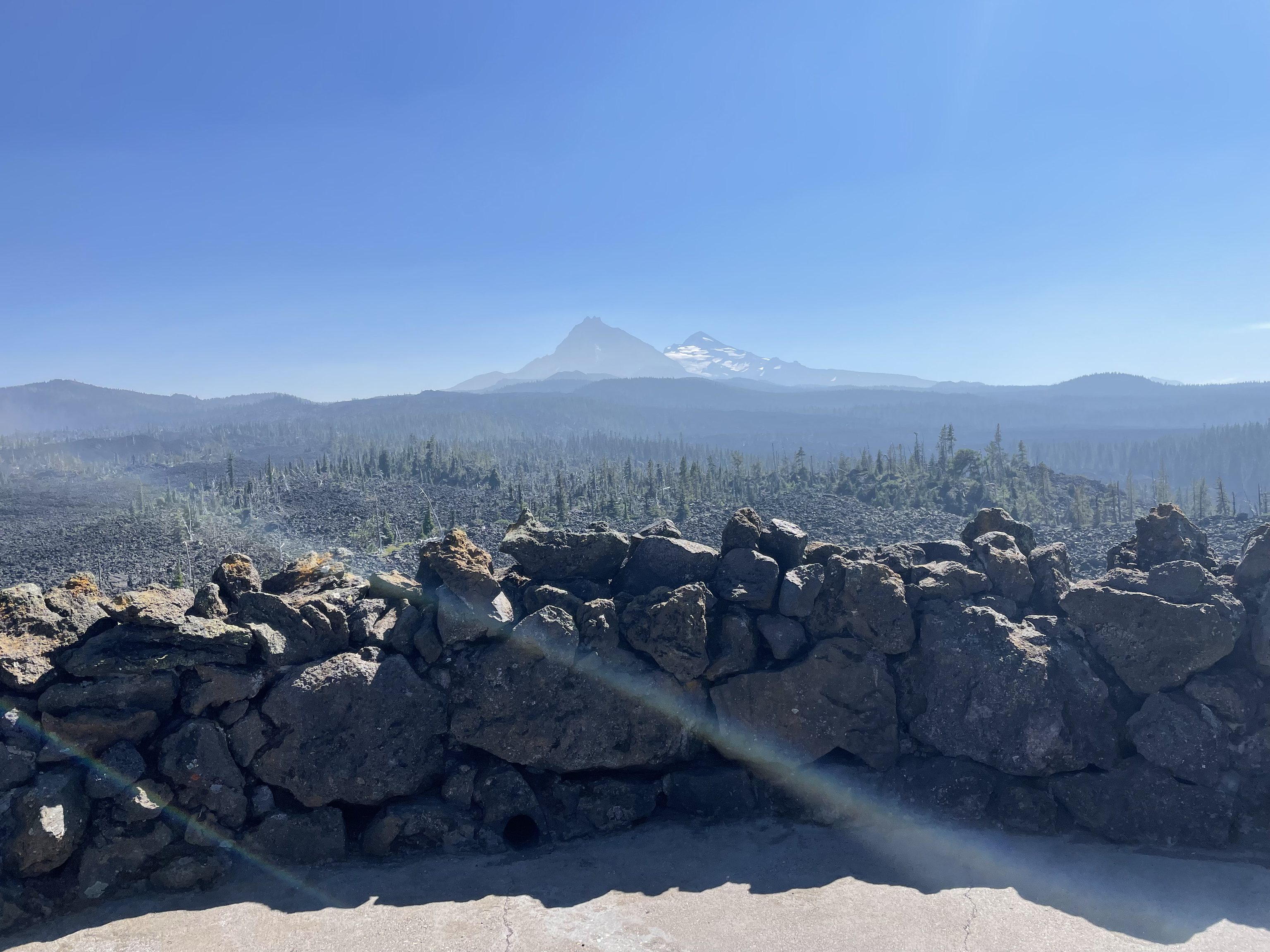 Mike met me there. Rather than rough it, we took advantage of being camped only six miles from Sisters to grab a long dinner at Three Creeks Brewing.

We started the drive to the Pole Creek Trailhead early, arriving there well before the sun was up. North Sister looked pretty awesome silhouetted against the sky. The big glowing thing in the sky in this picture is actually the Moon—this is one of the iPhone night shots. 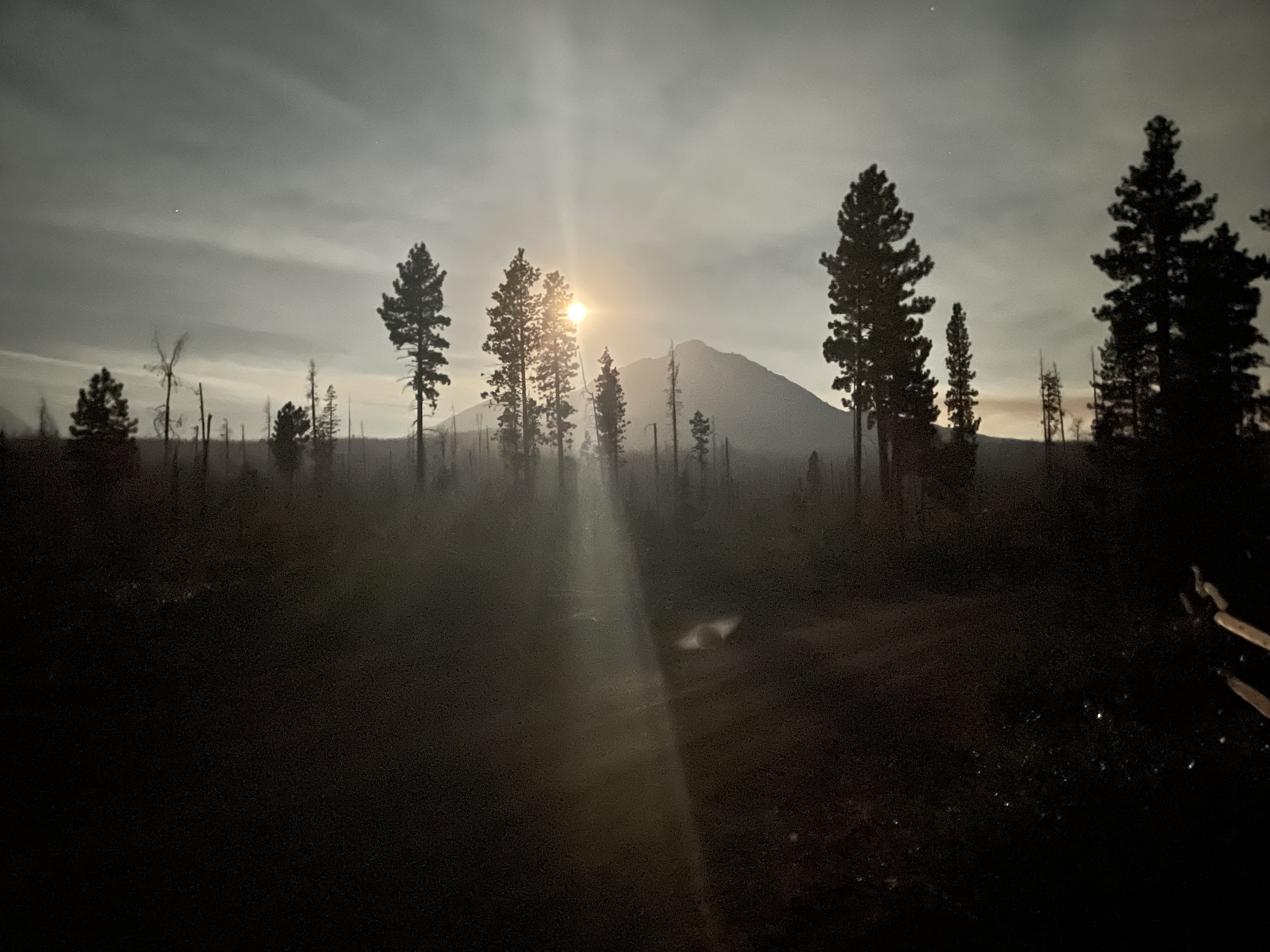 We were passed by another climber here, running pretty quickly despite the dark. I started to wonder if it was going to be another peak full of trail runners, but I need not have worried: I’ll end up describing almost every person we saw on trail.

A little while later, we had our first view of all three peaks. 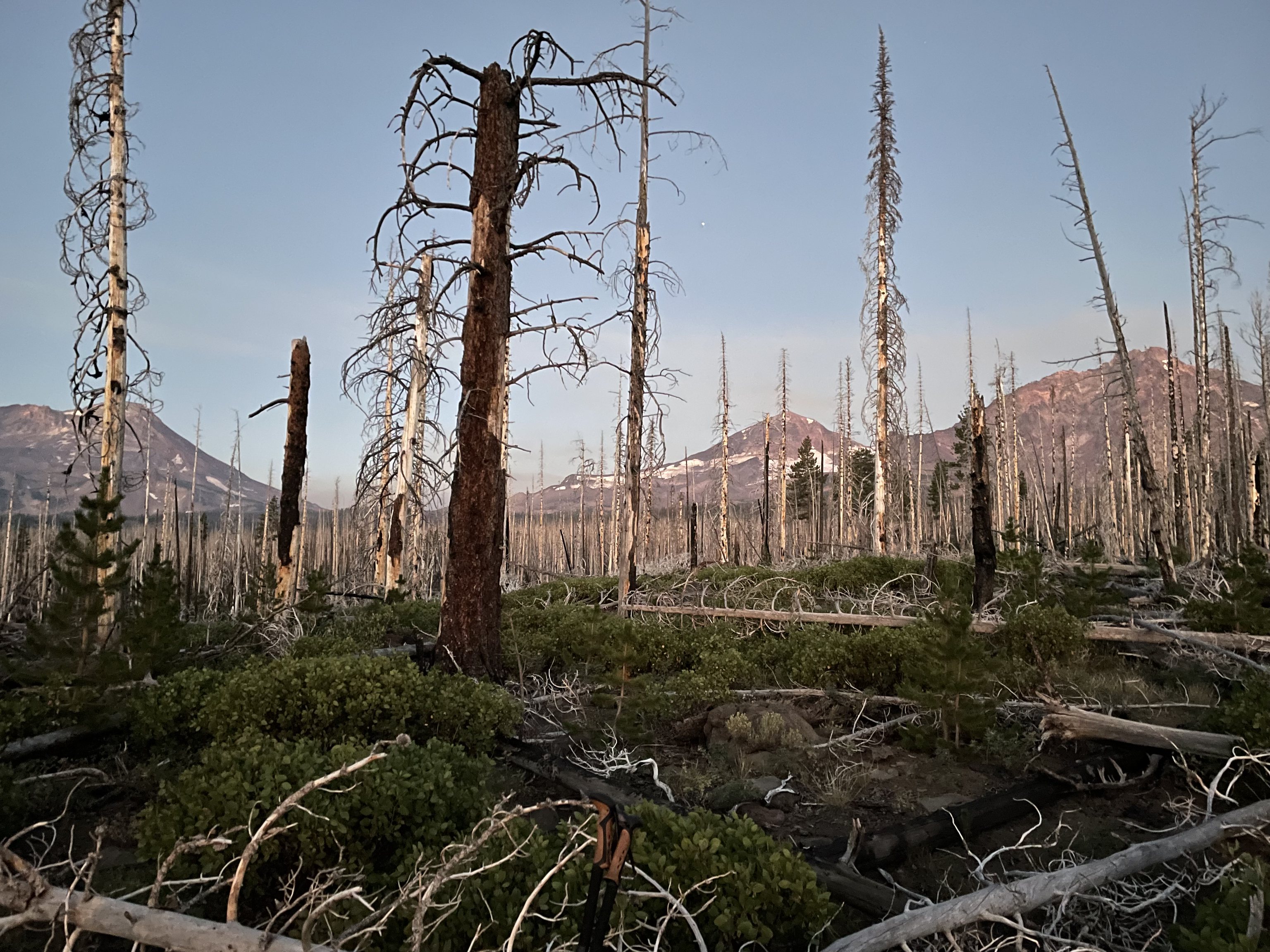 Not long after that, we saw our first smoke of the day. Note that line of smoke in the distance. We’re actually looking away from the fire here, but that line would move steadily closer to us. 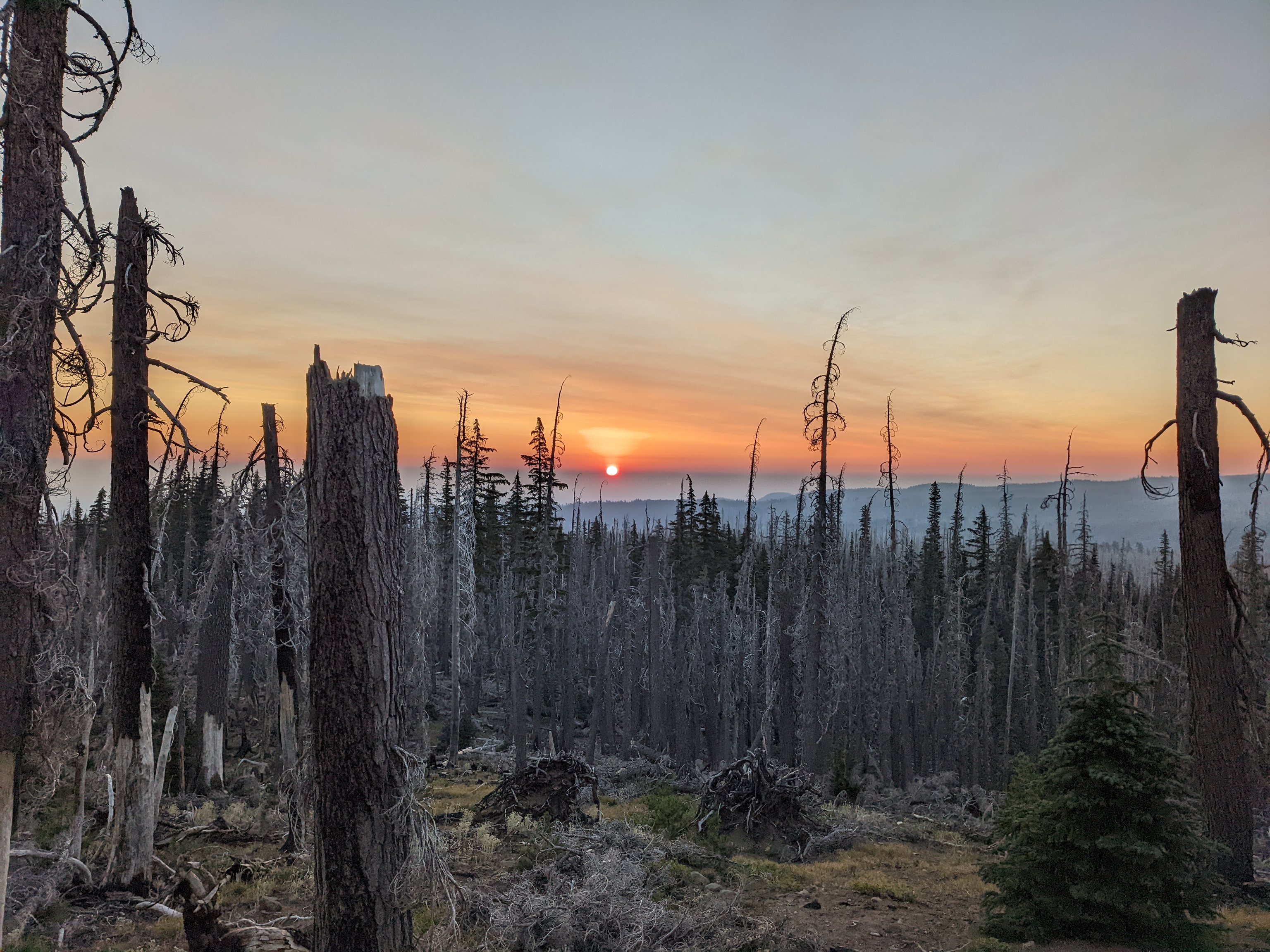 We’d missed a turn in the dark, and ended up hiking up a lovely parallel trail along a glacial stream. 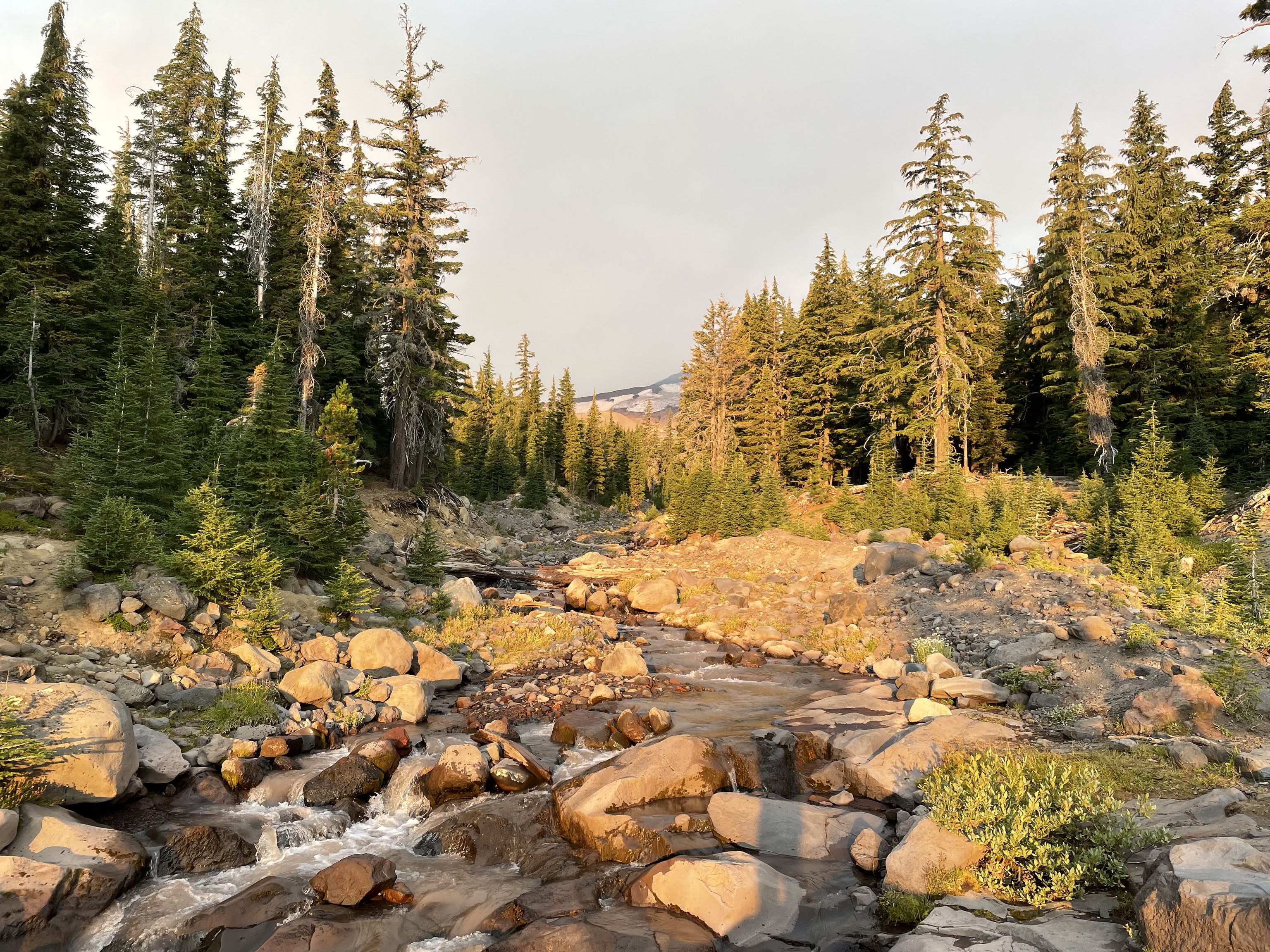 This hike had a very long approach. After the first couple of miles in the forest, and then the path along the stream, we spent a lot of time in fields like this one. 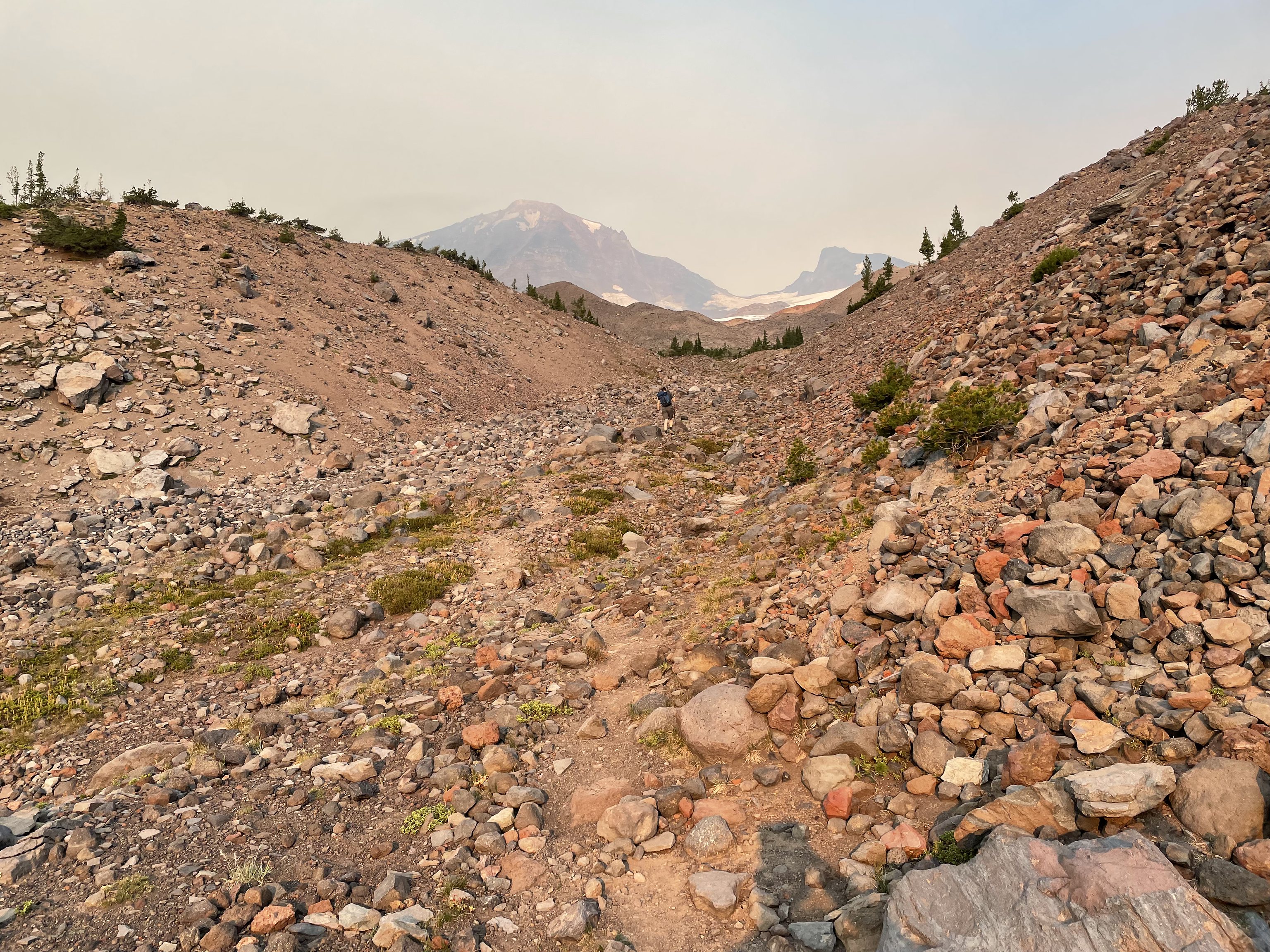 The smoke kept moving in, and the sun made the water look on fire. 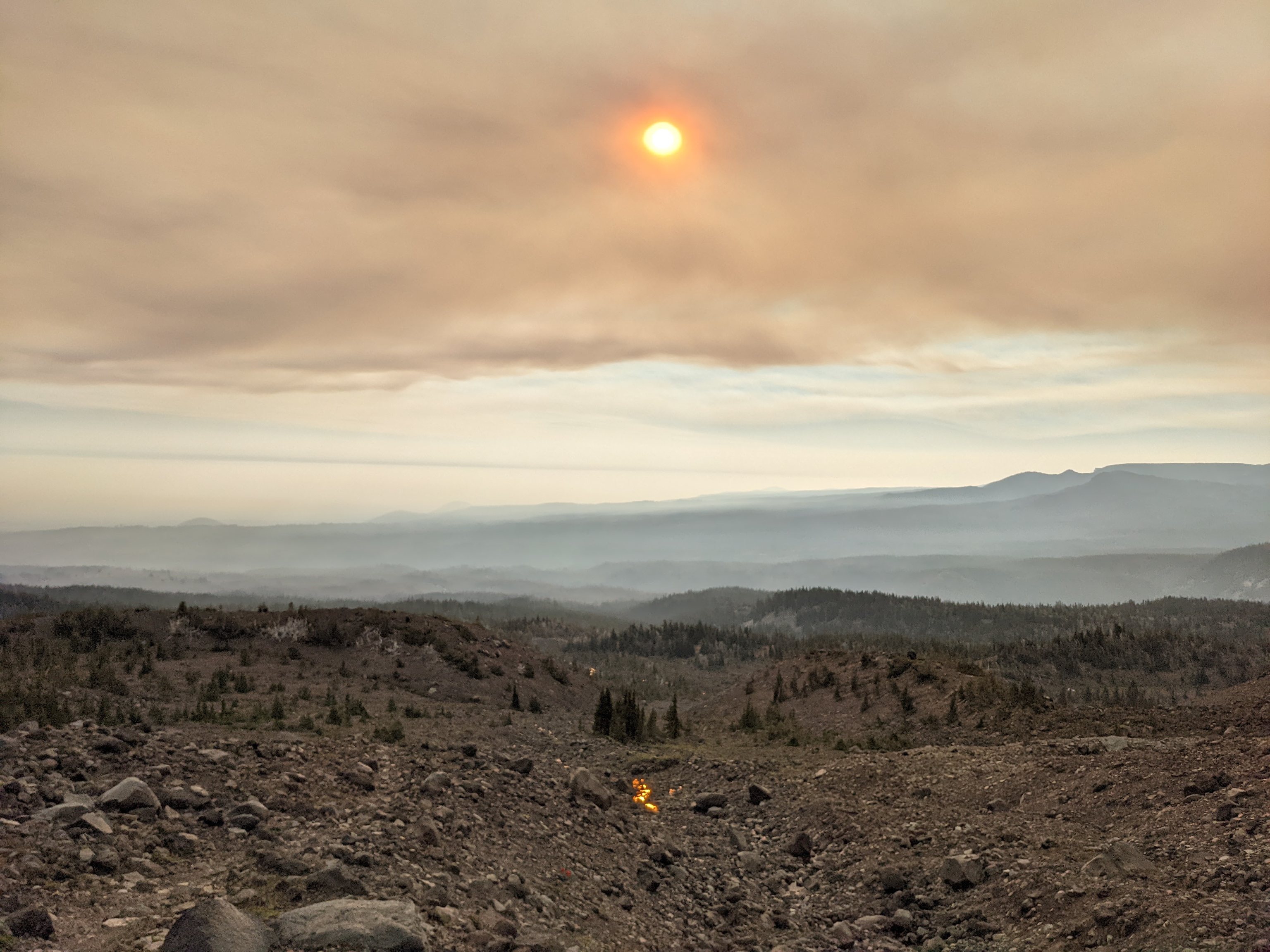 After cresting a few knolls, we could see Hayden Glacier, with Middle Sister in the background. 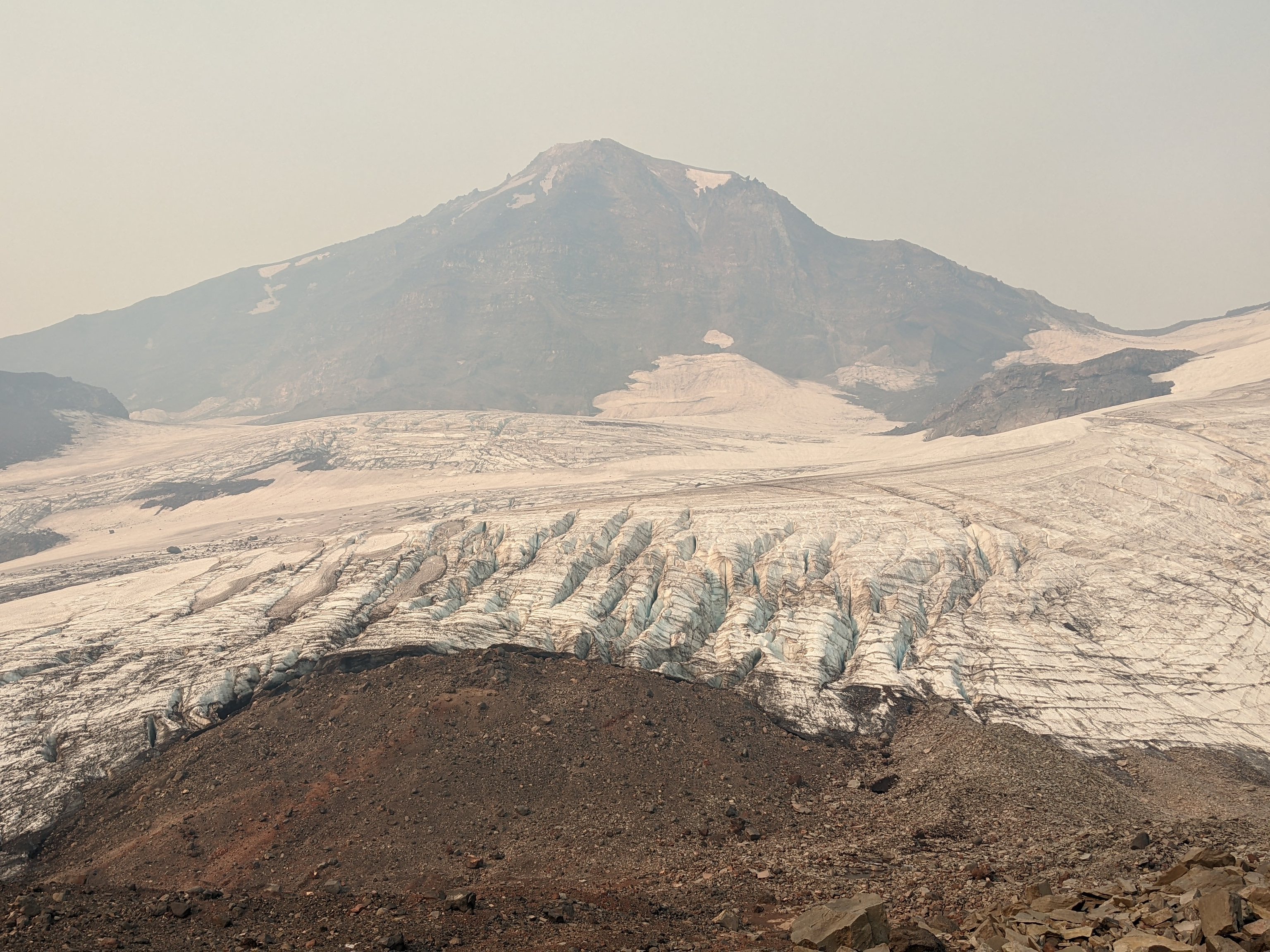 Earlier in the season, when the ice is more solid, the route crosses this glacier. But the crevasses were too much for us. We were going to take the summer route, to the right and around Prouty Point, the tall point in this photo. 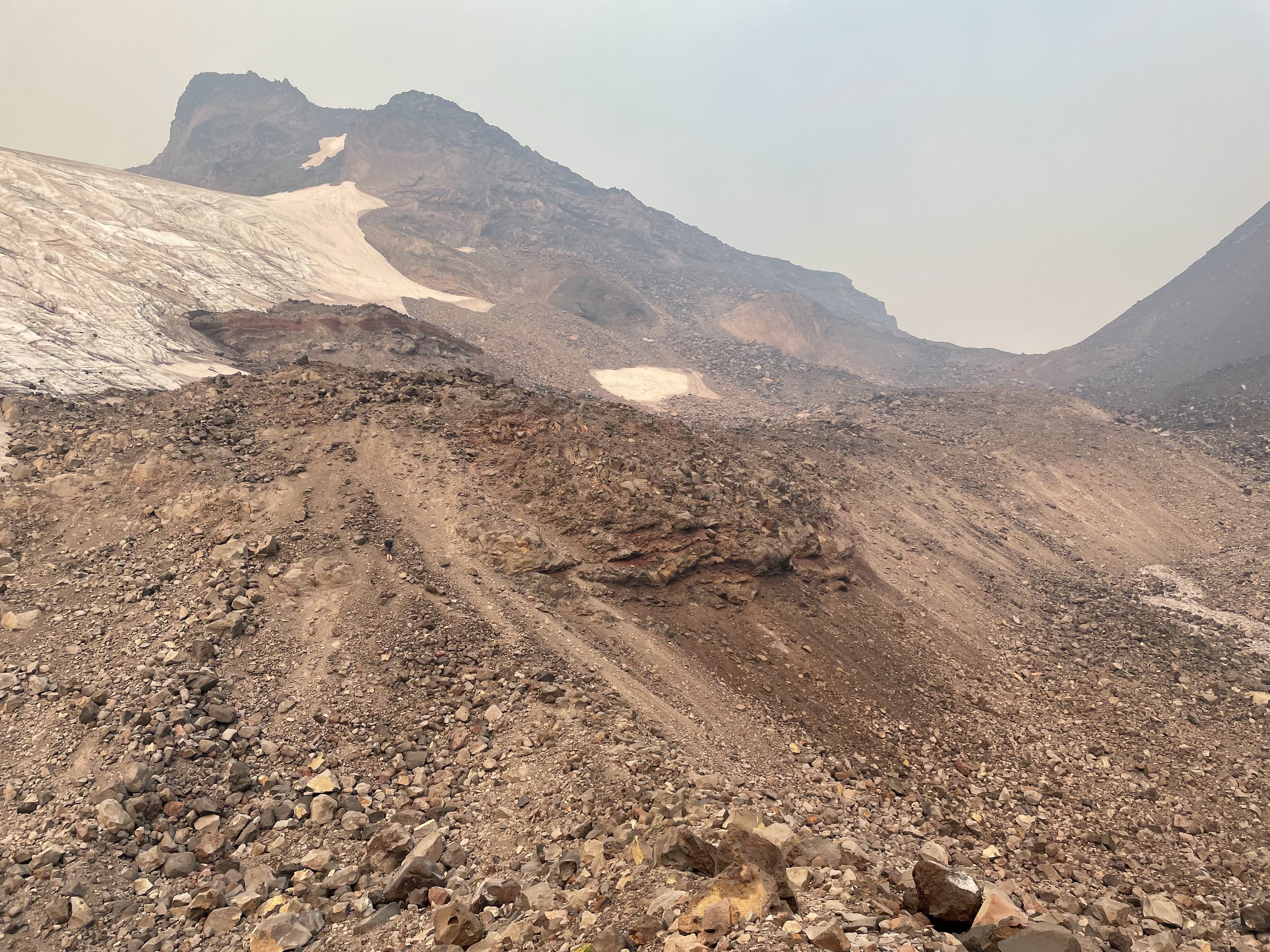 A pair of climbers passed us here, with their dog. They were on their way to do North Sister. We asked what sort of gear they were bringing, since we’d heard that mountain really needed some protection near the top. They said they were bringing none, and they’d heard Middle Sister was much too dangerous to try in the summer. We went our separate ways.

Once up to the saddle, we had to traverse a boulder field. This was one of the sketchier points of the trip, as the boulders tended to want to move as we walked on them, and we could hear boulders coming off North Sister.

Around here we started climbing with a couple who lived locally and very much enjoyed the extra jelly beans I’d brought as trail food. We also ran into the trail runner we’d seen earlier. He’d tried to glissade down the glacier, but fallen and cut his knee pretty bad. The woman we were climbing with provided him with her bandana, and he figured that’d be good enough to get back to the trailhead.

A few minutes later, the four of us ran into the glacier, and all got to try out our microspikes for the first time. Glacier travel was much preferred to the rocks, and much faster. 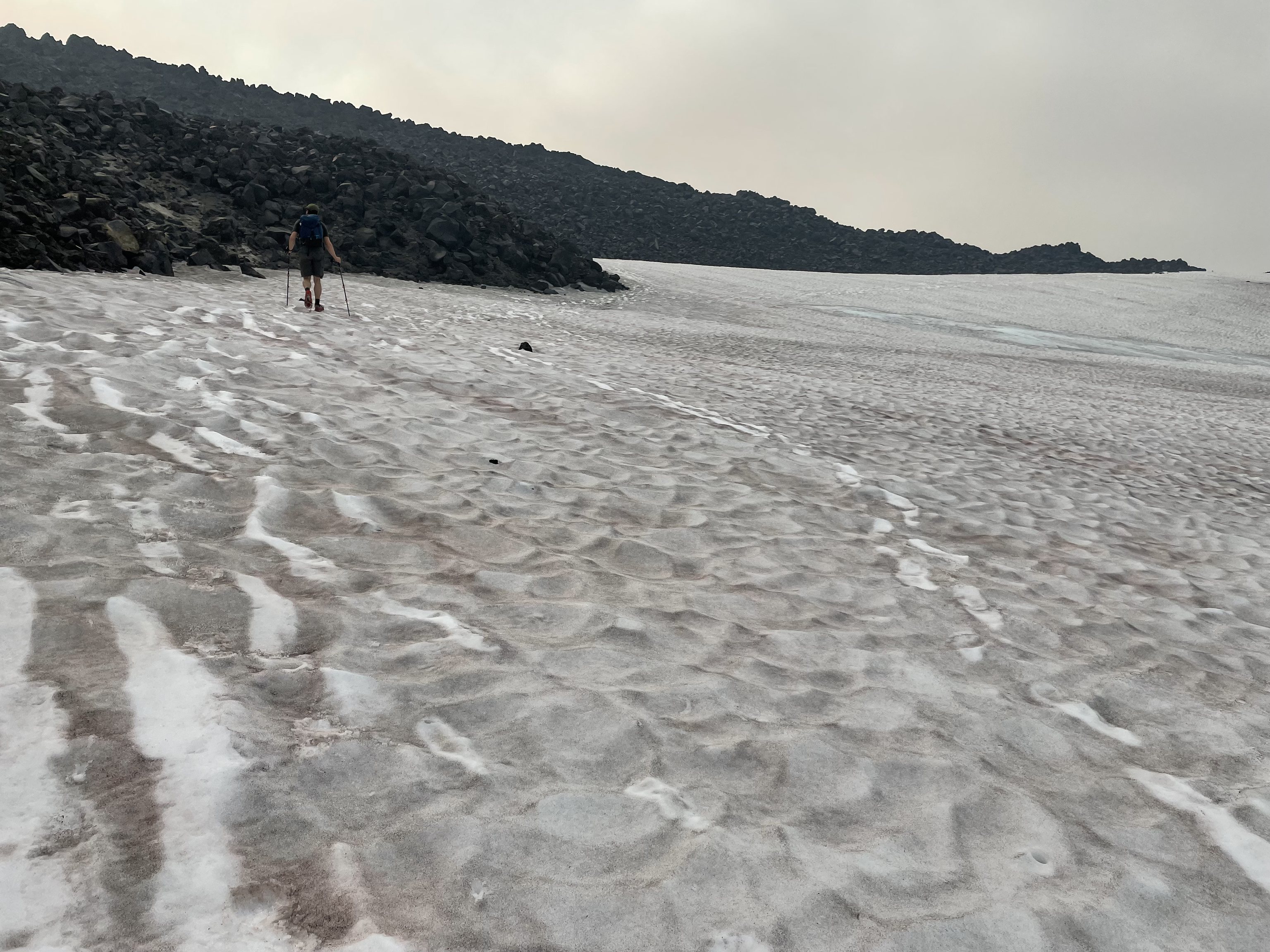 At the top of the glacier, there was a large pile of rocks, with the summit of Middle Sister behind. It looked very intimidating. 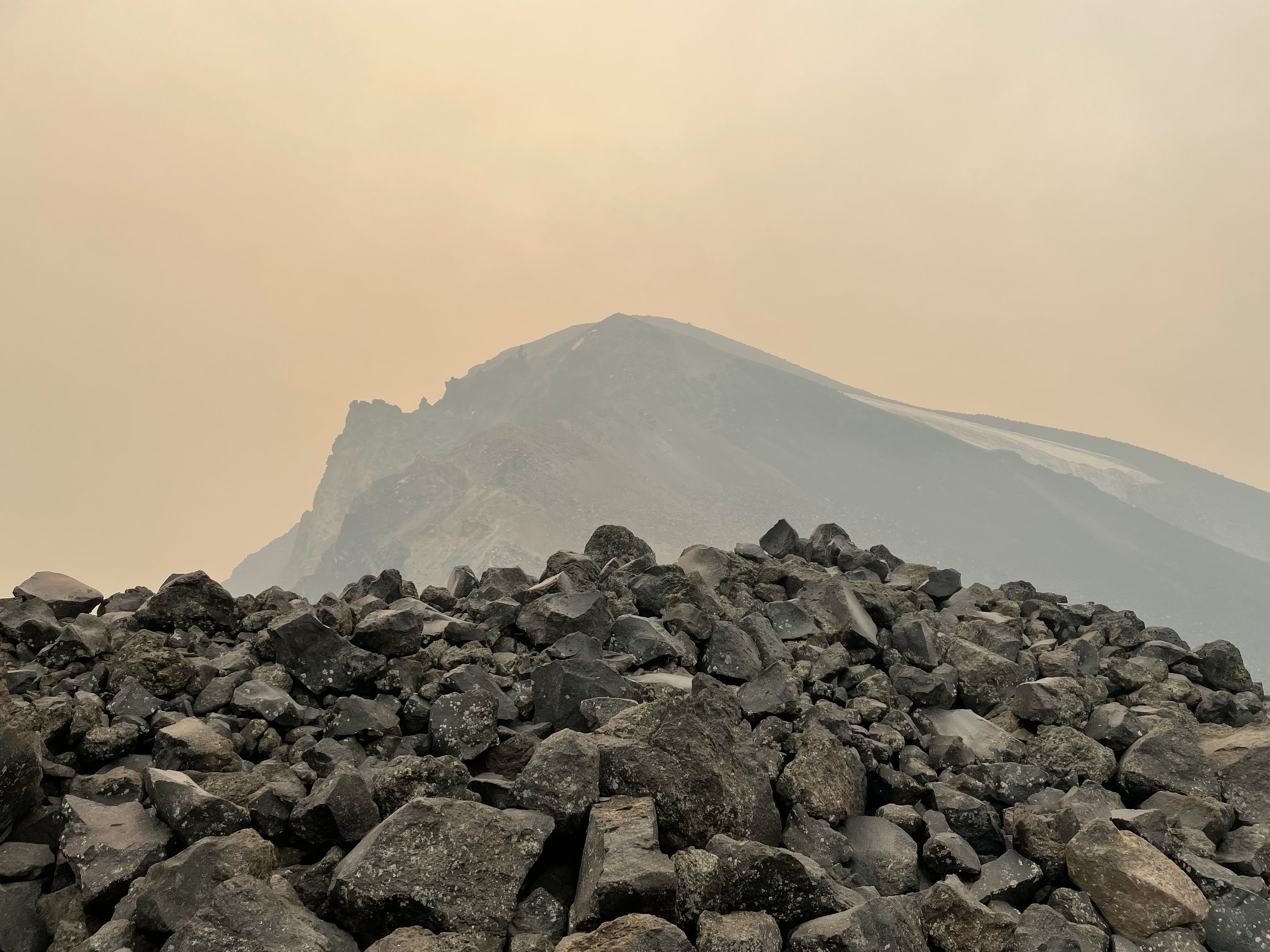 The four of us agreed: that face looked gnarly. We discussed turning back, but decided to go to the bottom of the saddle, then reassess. From the other side of the rock pile, it didn’t look much better. If you look very closely, you can see a set of switchbacks in the middle of the photo. 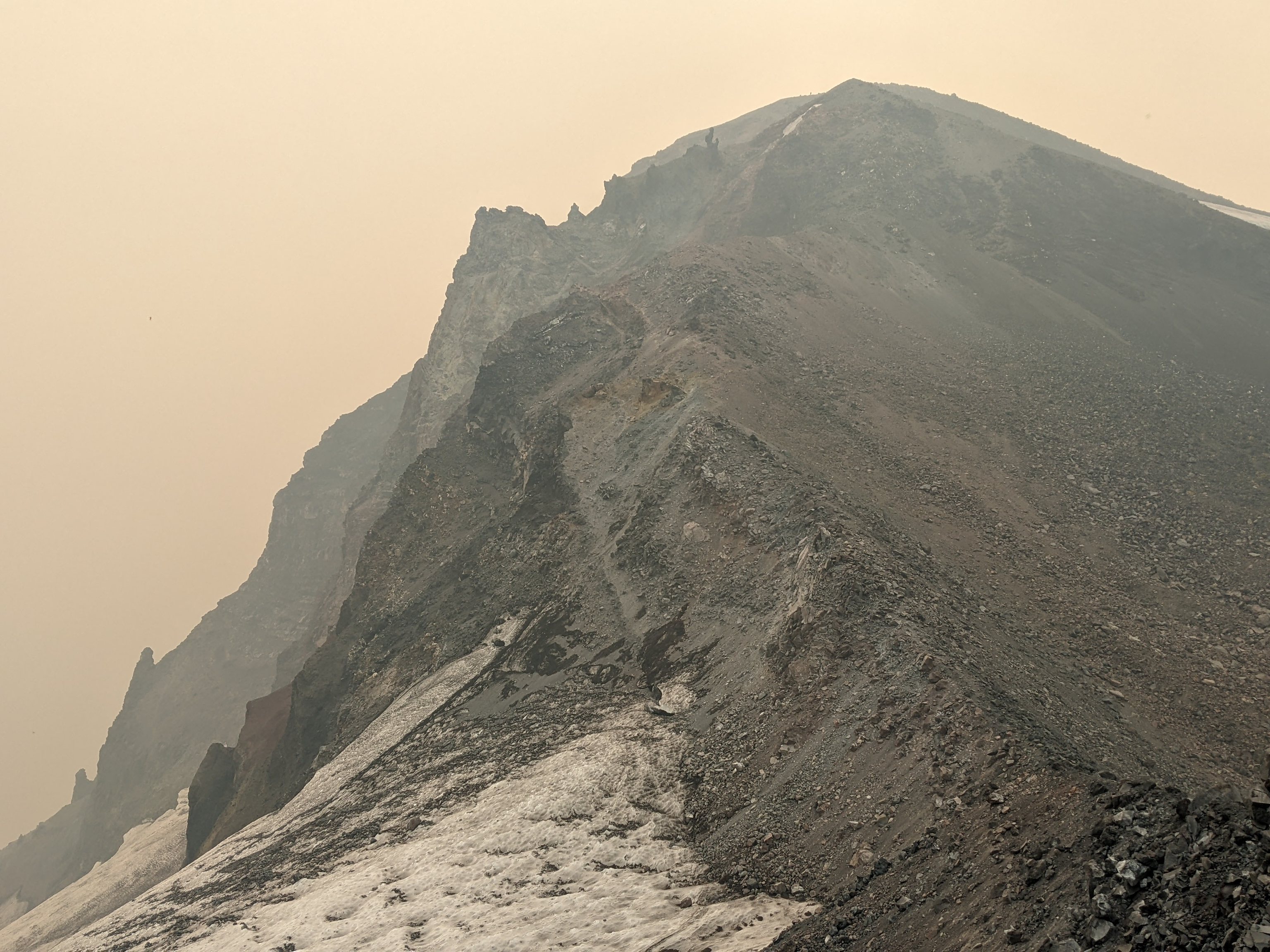 The face continued to look intimidating until we were right below it, and Mike remarked that it become much more 3D. That felt right. At a distance, the mountain looked like a wall. But once you were under it, you started to see a very climbable path. I’m not sure if the mountain always looked like that, or if it was a byproduct of the smoke. By now, not only had visibility dropped considerably, but ash was raining on us. But since we were so close, we pushed on.

Midway up, the scree started to get a lot finer, and eventually became sand. We saw a different set of three climbers coming down, aggressively sliding down the hillside. One went a little too far, and very nearly lost his balance. That was enough to make me have a seat on a rock, and do some thinking about if this was a level of risk I wanted to take.

I decided I could go a little further and reevaluate, and as I got higher it became clear there was another path with better rock. I pressed on. Once past that rock, things got less steep, and it became more of a walk-up. 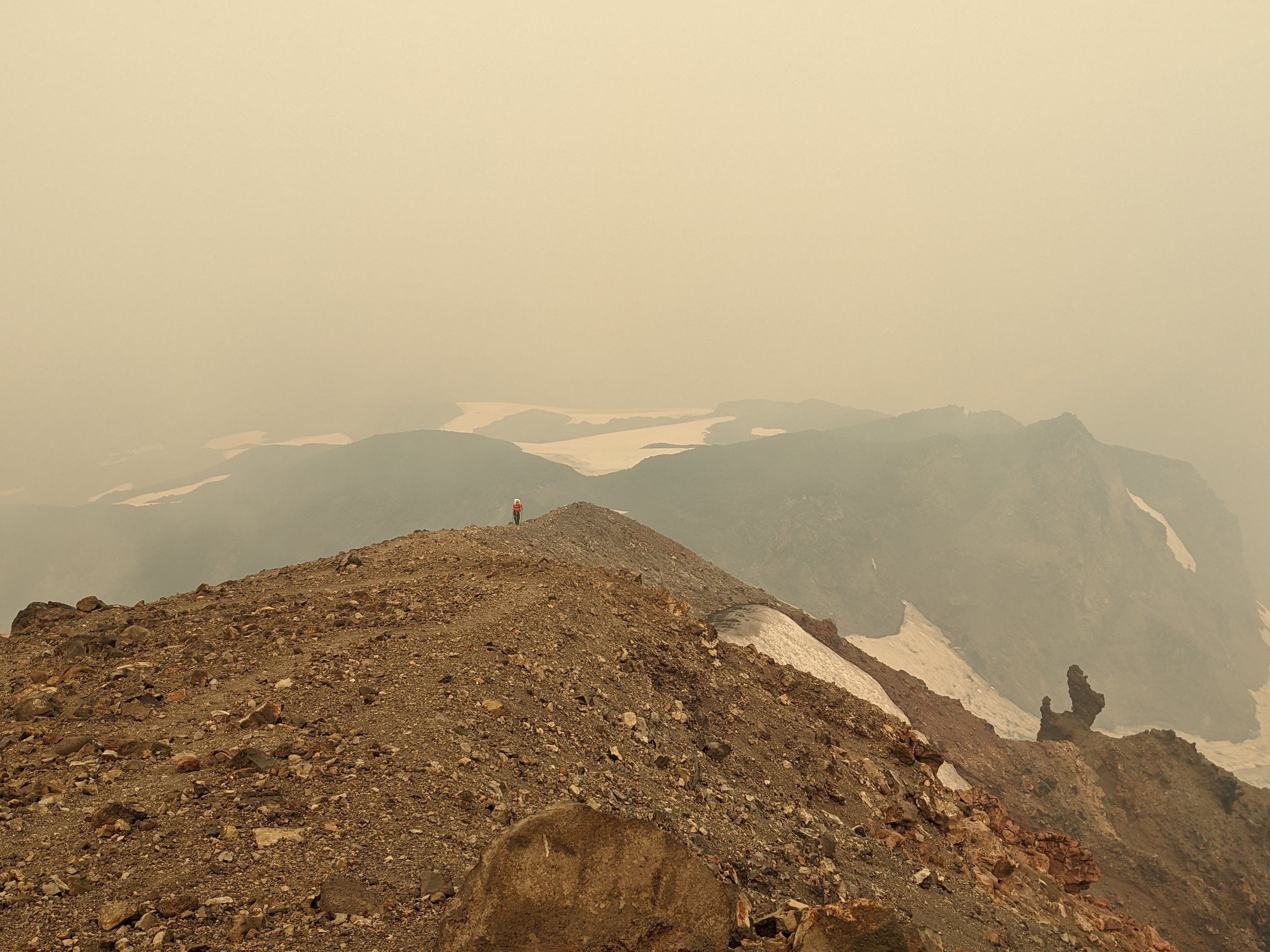 Unfortunately, there wasn’t much of a view at the top. 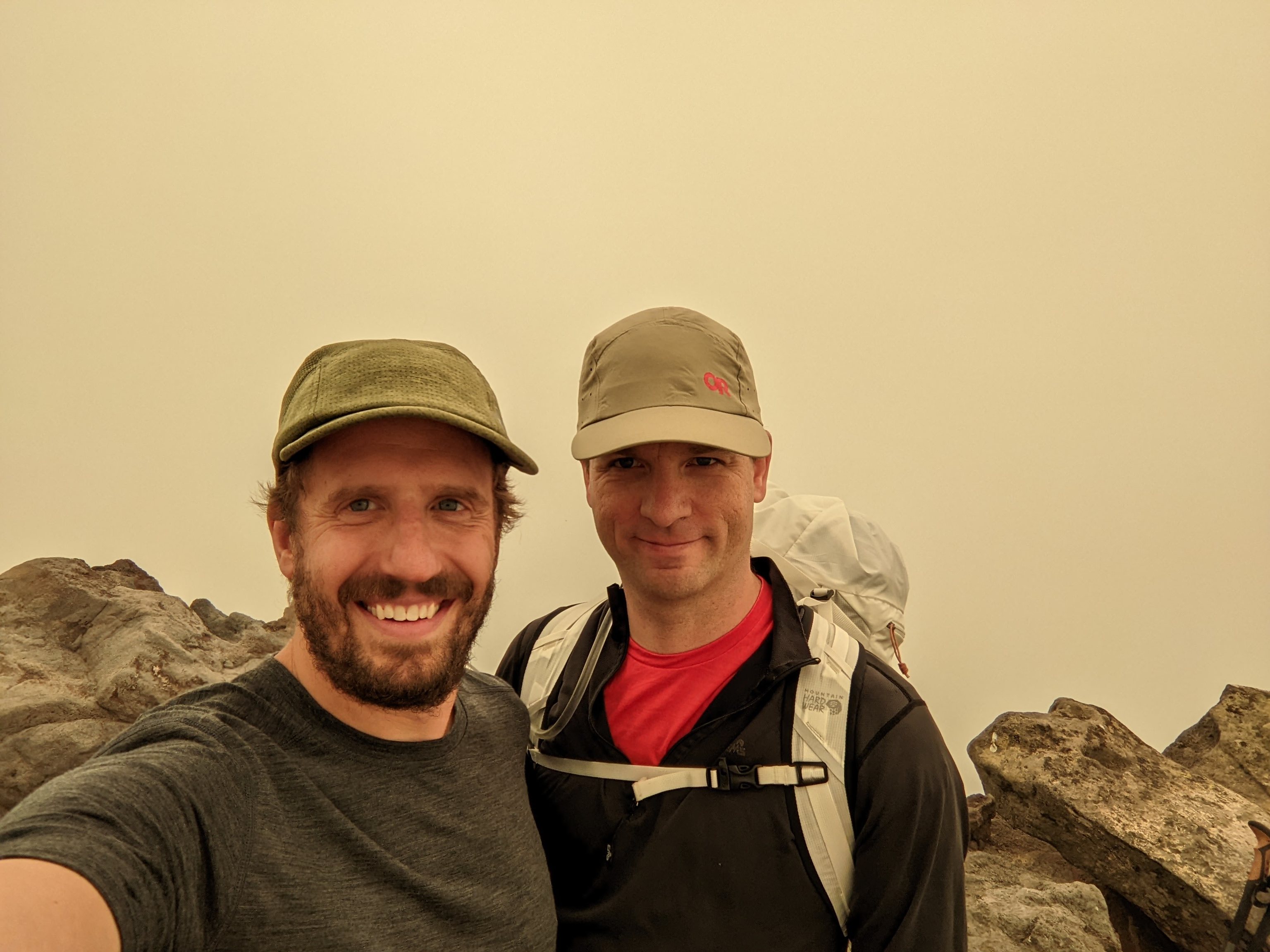 At the summit, we ran into three guys who had climbed North Sister that morning They’d even run into the couple with the dog up there, and explained the dog was a better climber than anyone, though they wondered if the dog hadn’t been lowered back down on a rope. They offered to let us traverse the glacier with them, but we didn’t feel prepared for that at all.

Air continued to get worse on the way down. 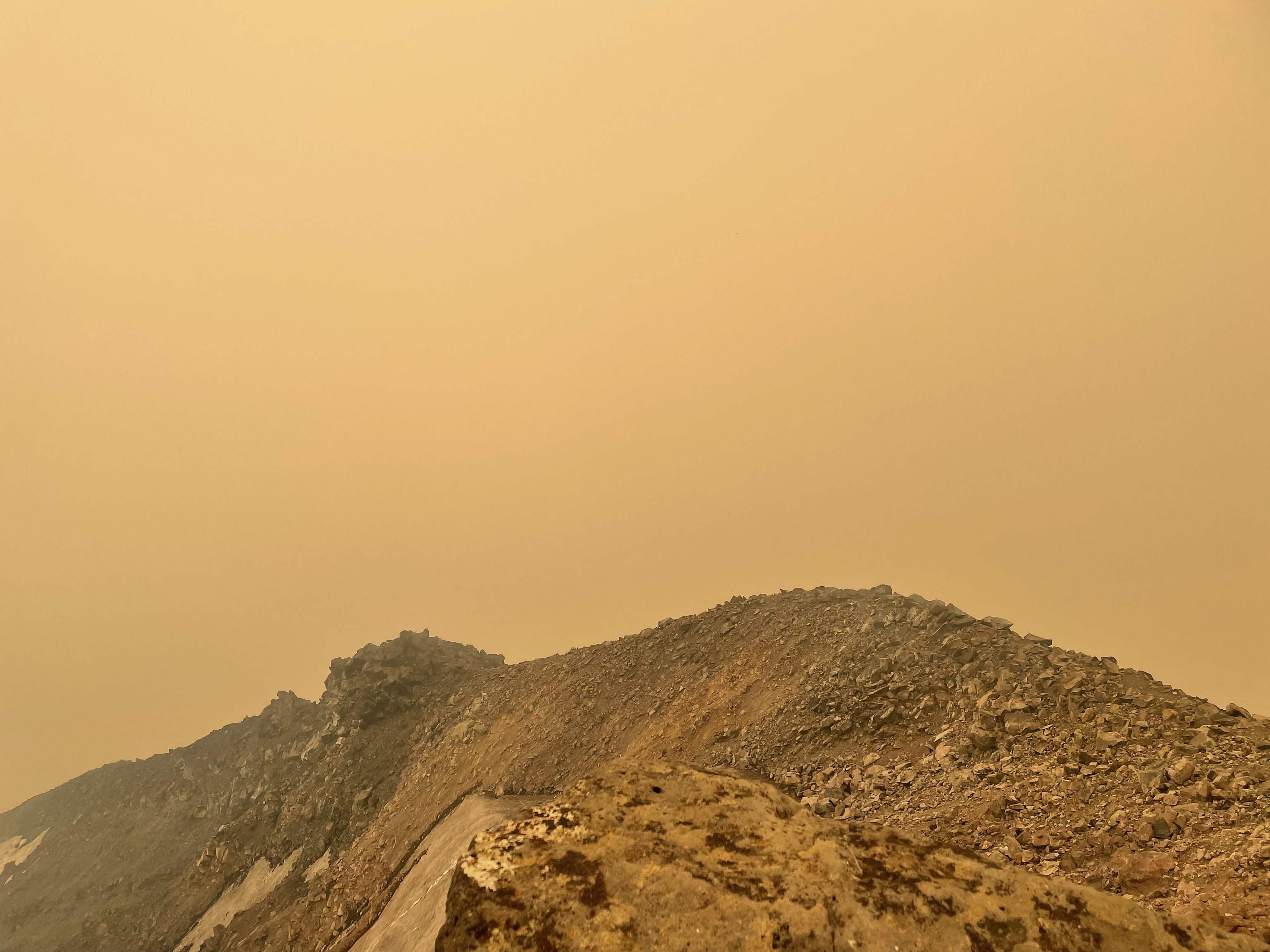 Surprisingly, on this hike we had cell service most of the time, and we started to get messages from Mike’s girlfriend letting us know that the air quality had climbed to over 300 in Sisters—15 miles further away from the fire. Jillian let me know that Highway 58 had been closed due to the fire, though I didn’t understand how big it had gotten yet.

We started to think that just maybe we didn’t want to spend the night in the woods breathing smoky air, and made plans to head home that night. But by the time we’d reached camp again, air quality was reasonable, and since we were pretty exhausted, we made a quick trip to the Sisters Saloon & Ranch Grill and spent a second night at Cold Springs.

In the morning, we stopped for breakfast at Sisters Coffee Company and reconnected with the world. The fire had more than tripled in size, and the town of Oakridge was under an evacuation order. It may not have been smokey in Sisters anymore, but Jillian reported that even our house, more than forty miles from the fire, had ash rain on it.

Overall, this was a much more difficult trip than South Sister, but not unmanageable. In addition to being a longer overall hike, the trail around Prouty Point adds a lot of distance high on the mountain, but without gaining much elevation. No shortage of spots to get water along the way, but definitely plan on getting on some ice. If we hadn’t had our microspikes, we might have spent hours longer out there traversing the boulders.